Warning: A non-numeric value encountered in /home/thevista/public_html/wp-content/themes/dailypress/include/breadcrumbs.php on line 54
Calendar >  “An Intimate Evening with David Foster”

“An Intimate Evening with David Foster”

Escondido, CA. – January, 2020 – Studio musician, arranger, and recording artist, David Foster will be performing for one-night only at the California Center for the Arts, Escondido on Monday, January 27, 2020 at 7:30 pm in the Concert Hall.

David Foster is one of the most successful songwriters and record producers in history- shepherding albums that have collectively sold in the hundreds of millions.

He has escorted singers who have straddled both pop and classical styles like Andrea Bocelli and Josh Groban into the mainstream. He has created culture-defining soundtracks for blockbuster films like The Bodyguard, Urban Cowboy, and St. Elmo’s Fire.

Joining this show in Escondido will be singer Katharine McPhee.

Renowned for her powerhouse presence and show-stopping performances, Katharine McPhee possesses a voice for the ages.

Audiences first fell under the chanteuse’s spell during a storied run on American Idol Season 5 in 2006. Propelled by the smash “Over It,” her 2007 self-titled debuted bowed at #2 on the Billboard Top 200 and achieved an RIAA gold certification. 2010 saw her return with not one, but two records – Unbroken and Christmas is the Time to Say I Love You.

The Center’s unique campus includes a 1,523-seat concert hall, a 404-seat theater, a contemporary art museum, art and dance studios, and a full-service conference center with meeting and banquet facilities.

The Center also runs an extensive education program and produces free community events. San Diego Magazine named the Center the “Best Limited Engagement” in North County. The Center was named in the Top Five for U-T San Diego’s Readers Poll for “Best Live Music Venue” and the Top Five for “Best Place to Get Married.” In 2016, the Center was named “Organization of the Year” by the Escondido Chamber of Commerce. In 2018, the Center was chosen as one of fifteen cities from all over the country to be awarded a grant known as the Levitt AMP [Your City] grant. The Center received $25K in matching funds to present the Levitt AMP Escondido Music Series, which is a minimum of 10 free outdoor concerts presented over 10 to 12 consecutive weeks during 2018.

Get more information about the show as well as purchase tickets here: http://artcenter.org/event/david-foster/. 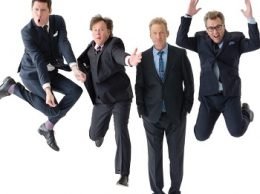 Are You Ready to “Go Live” with Whose Live Anyway?