TR Robertson –Pulitzer Prize winning playwright Lynn Nottage began, in the early 2000’s, a search for her cultural identity, a search for the missing pieces of her family tree. This search would lead her to stories about her great-grandmother, Ethel Boyce Armstrong, and the trials and tribulations she endured as well as the relationships she developed along the way. This story would become the inspiration for her award winning play, “Intimate Apparel”.

Nottage is a 2-time Pulitzer Prize winner in the field of drama for her plays, “Ruined” and “Sweat”. “Intimate Apparel” has won the American Theatre Critics and New York Drama Critics’ Awards for Best Play. Her numerous plays are produced throughout the United States. Under the direction of Melissa Coleman-Reed, formerly directing “Men on Boats” and “Having Our Say” at NVA, she brings to life Nottage’s characters that somewhat resemble people from her past. 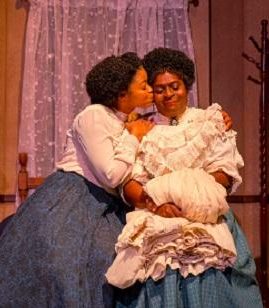 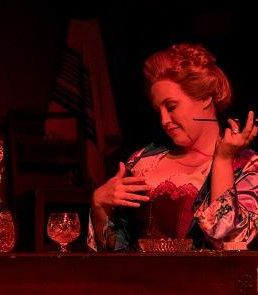 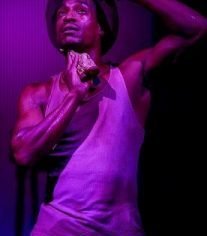 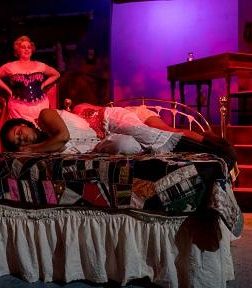 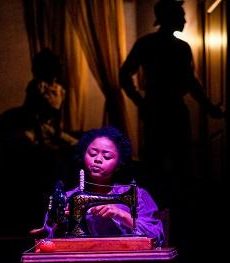 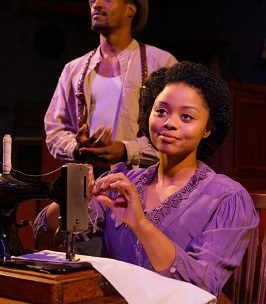 The 2 ½ hour play weaves the story of African American seamstress, Esther Mills, living in Lower Manhattan in 1905, rooming in a boarding home for women run by Mrs. Dickson. Esther has been making a living, saving every penny she could for 15 years, to try and raise enough money to open her own beauty shop. Esther is played with wonderful grace and dignity by Tamara McMillian, who has been in several other NVA productions. She presents Esther as a woman who has struggled most of her life, now 35 years old, and a woman who desires to find someone to share her life with. Mrs. Dickson is played by Milena Sellers Phillips, also a NVA veteran. Mrs. Dickson is a woman who speaks her mind, seems to life her life to the fullest and is not afraid to offer life lessons to Esther.

Esther has a number of people in her circle of “friends”. She has an ongoing work relationship with a gregarious white socialite, Mrs. Van Buren, who is interested in the corsets Esther makes as well as using Esther for a sounding board for her own marital issues. As the two get to know one another, Mrs. Van Buren develops what she thinks can be an even stronger relationship with Esther as she helps Esther write romantic letters to a man who has made contact with Esther while he is employed as a laborer on the Panama Canal. Mrs. Van Buren is played by Gerilyn Brault, also an NVA veteran as well as having performed in numerous other San Diego theatres.

Esther’s closest friend seems to be Mayme, played by Cashae Monya. Mayme is a “lady of the evening” who also desires to wear the beautiful corsets Esther makes. Esther finally shares the information about her correspondence with Mayme and Mayme also helps her with letter writing, adding a flourish to the letters to win over the Panamanian laborer. Esther will discover that Mayme’s lifestyle will eventually prove disastrous for Esther’s relationship with George.

Another person in Esther’s life is Mr. Marks, a Romanian Jew who sells Esther her fabric for the corsets and a man who is love struck by Esther, only there is one problem. Mr. Marks has an arranged engagement to a woman in Romania. Because of his faith he is unwilling to push his relationship with Esther. Mr. Marks is played by Tom Steward who has also performed in other NVA productions. Each of these people, Mr. Marks, Mrs. Van Buen and Mayme are masterfully played and represent the inner circle of people that will assist in establishing the direction Esther will take in developing a relationship with George, the Panamanian. A relationship that will prove not in Esther’s best interest.

Esther’s love interest, George Armstrong, is played by Taurian McLeod, making his first appearance at NVA. Throughout the play, in a series of asides, we see the relationship of George and Esther develop through letters they supposedly write to one another. McLeod presents George as a man who desires something better for his life, a man who wants to settle down, a man with a concern for Esther’s feelings. He does a great job of convincing us of all of these qualities; but as Act II develops we find that George has fooled us all.

Everyone in this play desires something different than the life they are living. Such was the case for millions of people in 1905 as the wave of immigration swept the United States, filling the cities with people who saw this country as an opportunity to establish a better life for themselves and their families. It worked for the better for many and for many they did not find the dream they were looking for. Discrimination, lack of education, increasing poverty, over crowdedness, and much more dashed the hopes of many as they struggled to make their lives better.

Lynn Nottage has created a story that typifies what many would go through in the search for the better life. In her search for her own past she uncovered stories she would use to develop “Intimate Apparel”. Assisting Director Melissa Coleman-Reed was her Creative Team consisting of Stage Manager Missy Bradstreet, Sound Designer MaeAnn Ross, Lighting Director Michael Rathburn, Properties Designer Rosalee Barrientos and Costume Designer JoJo Siu. A cleverly designed multi-level set by Scenic Designer Christopher Scott Murillo allowed the audience to visualize Mayme’s bedroom, Mr. Marks’ fabric store, Mrs. Van Buren’s drawing room and Esther’s bedroom and workroom without any set changes.

This is a moving, well-acted play on stage at New Village Arts in Carlsbad. “Intimate Apparel” will remain at NVA until October 20th. Tickets are available at 760-433-3245 or go to www.newvillagearts.org. Next up for NVA is “Around the World in 80 Days” beginning November 16th.