It happened at around 10:30 a.m. Monday near Oceanside Boulevard and Foussat Road, south of State Route 76 and east of Interstate 5 near a series of stores.

The driver of a silver Dodge Neon car went straight down Foussat Road and drove at the officer until they collided, according to police.

Witness Toni Lessard said the car involved in the traffic stop had pulled over and the driver was pulling out his registration when the suspect’s car drove toward the cop.

Lessard said the suspect was swerving prior to the crash and sped up when approaching the officer.

The impact sent the veteran officer flying through the air; he landed feet away and rolled on the ground for a bit.

Lessard said the officer was unconscious for a moment and when he woke up, it took him a few minutes to realize what happened.

“We had to pull up out of the middle of the intersection. We parked the car and we were like, oh my god, oh my god,” said Lessard. “She got on 9-11 and I was just running down there.”

The officer was injured and taken by an air ambulance to Scripps Memorial Hospital.

“That’s his job, it’s his career, it’s how he provides for his family. It’s how he lives in his house, it’s how he has food on the table. It’s just really messed up that people have to go so low,” said Lessard.

The driver and passenger in the suspect vehicle took off and drove about three blocks away before abandoning their vehicle, said police. With help from witnesses, one of the suspects was taken into custody.

It was not clear whether that suspect was the driver or the passenger yet, said police.

Authorities are still searching for the second suspect. He was identified as a man wearing a white t-shirt, black shorts and sandals.

The officer, who has not been identified, was taken on a life flight to Scripps La Jolla, conscious and breathing. 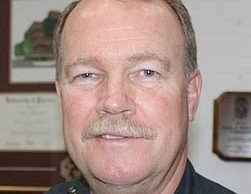