Escondido, CA–January, 2022 -California Center for the Arts, Escondido (CCAE) is proud to present the following events in February 2022 and March 2022. From the sweet sound of Motown, classical music, guitar virtuosos, traditional dance, to a post-post-modern diva, there is something for everyone to enjoy. Tickets are available for purchase at artcenter.org or by calling (800) 988-4253.

MOTOWN: THE MUSIC THAT CHANGED AMERICA

The ultimate celebration of the sweet sound of Motown is returning to Escondido! This extraordinary live show combines first class music together with outstanding performers and an amazing band featuring the D. Ben-jamin’ Band under the direction of Duane Benjamin. You’ll hear the hits of Marvin Gaye, Smokey Robinson, The Temptations, Martha and the Vandellas, The Supremes and more. Presented by CCAE Theatricals.

THE TEN TENORS: LOVE IS IN THE AIR

Open your hearts to The TEN Tenors because Love is in the Air! The TEN Tenors will be singing some of the most popular feel-good love songs and first-dance wedding songs of all time, including “All You Need Is Love,” “Unchained Melody,” “I’d Do Anything For Love,” the enduring classic “Somebody To Love,” and many more, all performed in beautiful 10-part harmony. For anyone with a soft spot for a tender tune, this is an experience not to be missed.

Internationally acclaimed soprano Larisa Martínez is widely regarded as one of the most exciting talents of her generation. She has been recently seen as Violetta in Wichita Grand Opera’s La Traviata conducted by Eugene Kohn, as Sophie alongside superstar tenor Piotr Beczala in Werther (Culturarte), and as Maria in West Side Story conducted by Lawrence Foster with Metropolitan Opera tenor Michael Fabiano (Festival Napa Valley). Ms. Martínez made her Kennedy Center recital debut and Carnegie Hall Stern Auditorium/Perelman Stage debut, singing Mahler’s Symphony No. 2 with the Athens Philharmonic, conducted by Yiannis Hadjiloizou.

Ms. Martínez was invited as part of President Barack Obama’s artistic delegation to Cuba, culminating in her performance on the 2016 Emmy®-nominated PBS special, Live from Lincoln Center: Seasons of Cuba.

For the last three years, Ms. Martínez has toured worldwide with tenor Andrea Bocelli, debuting at venues including Madison Square Garden and the Hollywood Bowl. She also has a long history of collaborations with violinist Joshua Bell, including two PBS specials and an upcoming “Voice and the Violin” concert tour.

Luca Stricagnoli: With a huge online following (over 200 million views of his music videos), and bookings in every corner of the globe, Stricagnoli has been hailed as a phenomenon and a guitar prodigy. He has brought his unique style of re-arranging rock classics for acoustic guitar—played on self-invented instruments like the Reversed Triple Neck Guitar and the Reversed Slide Neck—to over 20 countries with crowds of up to 12, 000 people. Luca has even grabbed the attention of famous bands such as Red Hot Chili Peppers, Metallica and Walk Off The Earth. This will be Luca’s third time touring as a member of International Guitar Night. Thu Le: An international, award-winning classical guitarist and certified guitar teacher. She began playing at the age of four under the guidance of her father and had the honor of being the youngest-ever student admitted to the prestigious National Conservatory of Music in Hanoi. She has graced stages around the world, performing as a soloist and hosting a series of successful master classes throughout North America, UK, Europe, the Middle East and Asia, as well as regular performances in her home country of Vietnam. In addition to her solo work, Thu collaborates and performs with orchestras, in string quartets, and in duets with violinists and flutists. This will be Thu Le’s IGN debut.

Jim “Kimo” West: Inspired by the beautiful Hawaiian landscapes of Hana and Maui and the sounds of the islands, Jim was drawn to Hawaii’s iconic guitar style, “ki ho’alu” or “Slack Key guitar.” He has gone on to become one of the world’s foremost Slack Key players, garnering millions of streams on Spotify and Pandora. Jim is a 2021 Grammy winner for his CD More Guitar Stories and a 2019 Grammy nominee for his album Moku Maluhia. He is also a three-time Na Hōkū Hanohano (Hawaiian Grammy) nominee and a winner of the LA Treasures Award for his efforts in keeping this important acoustic tradition alive. His work as long-time guitarist for internationally renowned funnyman Weird Al Yankovic garnered Jim four Grammys and a Billboard #1 CD debut for 2015’s Mandatory Fun. Jim’s latest solo release is Ka Honua Maluhia (2021). This will be his second time joining the International Guitar Night tour. For more information, visit his website at www.jimkimowest.com.

Lulo Reinhardt: The grand-nephew of the legendary Gypsy Jazz guitarist Django Reinhardt, has carried on the family tradition while incorporating new Latin rhythms, a style he calls Latin Swing. Known for his strong percussive playing and lightning solos, Lulo is the most revered member of IGN, having appeared with four previous lineups in addition to hosting this year’s edition.

$25 – $55
Jane Monheit is one of the finest vocalists working today. Blessed with “a voice of phenomenal beauty” (Stephen Holden, New York Times), Monheit has had plenty of milestone moments in establishing herself as one of today’s best and most important vocalist-musicians. From the start of her career, Monheit’s mellifluous voice has been compared to Ella Fitzgerald’s incandescent instrument, both possessed of an effortless melodicism, expert timing, and a gift for flawless diction. Come What May, her first album in five years, features a mix of upbeat standards, fresh takes on well-loved ballads, and lesser-known tunes. The album is a catharsis in light of the pandemic, and as the title and song selection suggest, is a statement of resiliency and hope.

$25 – $75
Ballet Folklórico de Mexico de Amalia Hernandez returns to the United States for an extended multi-city tour featuring renewed performances of the company’s classic choreography. Founded in 1952 by dancer and choreographer Amalia Hernández, Ballet Folklórico brings together the music, dance, and costume of Mexican folklore from pre-Colombian civilizations through the modern era. With its permanent home at the Palacio de Bellas Artes, one of Mexico City’s most historic venues, the company has developed choreography for 40 ballets, composed of 76 folk dancers who have performed extensively across Mexico and abroad.

This project received support from the California Arts Council, WESTAF (the Western States Arts Federation), and the National Endowment for the Arts.

In the vanguard of creative programming, Bryan and Silvie are equally committed to presenting both traditional masterworks and the music of their time. Since 2013, they have commissioned nearly a dozen new works, as well as curated cross-disciplinary concert experiences that meld classical and contemporary music with jazz, poetry, and visual/media arts — leading collaborative partners have included photographer and cinematographer Edward Burtynsky, Mercury Films, and multimedia studio Normal.

Named one of CBC Music’s “30 hot Canadian classical musicians under 30”, the dynamic Cheng² Duo has been making music together for the past 17 years. With a wide-ranging repertoire from baroque to contemporary, from original arrangements inspired by folk music to newly commissioned works, the duo has presented engaging recitals in world-class concert halls throughout North America (Canada and USA), Europe (Belgium, France, Czech Republic, Germany, Holland, Italy, UK), and Asia (China and South Korea). Now touring extensively, they have established a reputation for being invited for return engagements at renowned venues and festivals, including Carnegie Hall’s Weill Recital Hall (NY), Chamber Music at the Clark (Los Angeles), the National Gallery of Canada, and Ottawa Chamberfest. The duo has also been featured at numerous other international festivals, including Aspen (Colorado), Trasimeno (Italy), Usedom (Germany), and Festival of the Sound (Ontario)

Five-time Grammy Award winner, legendary blues artist, and Blues Hall of Famer Buddy Guy is a pioneer of the Chicago blues sound and has served as an influence to some of the most notable musicians of his generation, including Eric Clapton, Jimmy Page, Jimi Hendrix and Stevie Ray Vaughan. Ranked 30th in Rolling Stone magazine’s list of the “200 Greatest Guitarists of All-Time,” his raw, ferocious and unadulterated sound is a true pleasure for aficionados and genre newcomers alike.

With 19 studio albums, seven Juno Awards, 27 Maple Blues Awards and multi-platinum record sales, Colin James has earned a spot in the pantheon of blues guitarists. He can burn hard with his blistering guitar, take it easy with a soulful ballad or roll into an R&B groove anchoring it all in the blues. Over the years Colin has worked with some of the world’s most revered artists including, Bonnie Raitt, Albert Collins, Pops Staples, Robert Cray, Albert King, Keith Richards, Lenny Kravitz, ZZ Top, Mavis Staples and Buddy Guy.

Post-post-modern diva Meow Meow has hypnotized, inspired, and terrified audiences globally with unique creations and sell-out seasons from New York’s Lincoln Center and Berlin’s Bar Jeder Vernunft to London’s West End and the Sydney Opera House. Her solo works have been curated by David Bowie, Pina Bausch, Mikhail Baryshnikov, and numerous international arts festivals and garnered numerous awards including the Edinburgh International Fringe Festival Award, as well as the Green Room and Australian Helpmann awards. Besides being a prolific creator of original music, theater, and dance-theater, Meow Meow specializes in the Weimar repertoire and French chanson.

All guests must show proof of full vaccination and photo ID to enter our theaters.

Trained CCAE staff and security will review your proof of vaccination and ensure it matches your photo ID (for those over 16). Please plan to arrive early to allow time for check-in.  Guest who do not comply will not be admitted.

A picture of your vaccination card

Ticket holders over the age of six (6) years of age and those who need a reasonable accommodation for medical conditions or sincerely held religious beliefs must provide a negative COVID-19 PCR test or at-home rapid test taken within 72 hours prior to entering a venue.

Masks are required for everyone over 2 years of age for all indoor events while not actively eating or drinking.  Masks must be made of paper or cloth and cover your nose and mouth and fit snugly on your face.

Vaccination/testing documentation is not required for outdoor events.

About California Center for the Arts, Escondido

With a mission of bringing people together to discover, create and celebrate both the visual and performing arts, California Center for the Arts, Escondido is the cultural center of North San Diego County.

The Center’s unique campus includes a 1,523-seat concert hall, a 404-seat theater, a contemporary art museum, art and dance studios, and a full-service conference center with meeting and banquet facilities. The Center also runs an extensive education program and produces free community events. San Diego Magazine named the Center the “Best Limited Engagement” in North County. The Center was named in the Top Five for U-T San Diego’s Readers Poll for “Best Live Music Venue” and the Top Five for “Best Place to Get Married.”

All information is accurate at the time of release but is subject to change.

← PREVIOUS ARTICLE
20% Off Pageant Tickets. A Gift To Fall In Love With! 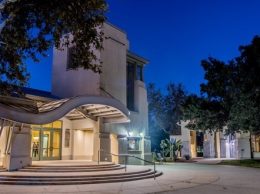 LOVE IS IN THE AIR WITH THE TEN TENORS

20% Off Pageant Tickets. A Gift To Fall In Love With!