Loading...
You are here:  Home  >  Calendar >  Hospice of the North Coast Joins with Marines to Honor 17 Veterans

Carlsbad, CA … Hospice of the North Coast (HNC) was honored and humbled to join with Camp Pendleton-based Marine Corps members in recognizing 17 veterans for their service on November 11, 2015 with a moving “Pinning Ceremony” at ActivCare Bressi Ranch Assisted Living in Carlsbad. Veterans Day 2015 marked the 70th anniversary of the end of World War II, making the tribute even more special. 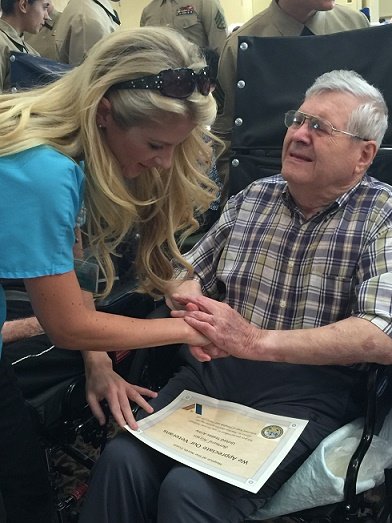 HNC Executive Director Sharon Lutz reports, “As a Level Three We Honor Veterans (WHV) provider, HNC wanted to make Veterans Day memorable for those who have served our country so well.” Fifteen of the honorees are ActiveCare residents. The other two are the husband of a resident and an employee.

Kimberly Bernardy, who recently became aligned with HNC as a volunteer helping to ease the life passage of veteran-clients, was an event organizer. A 2014 U.S. Naval Academy graduate who now serves as a Logistics Officer, Second Lt. Bernardy was accompanied by many military colleagues of various ranks in honoring each vet at the ceremony with a flag pin and a certificate of thanks. 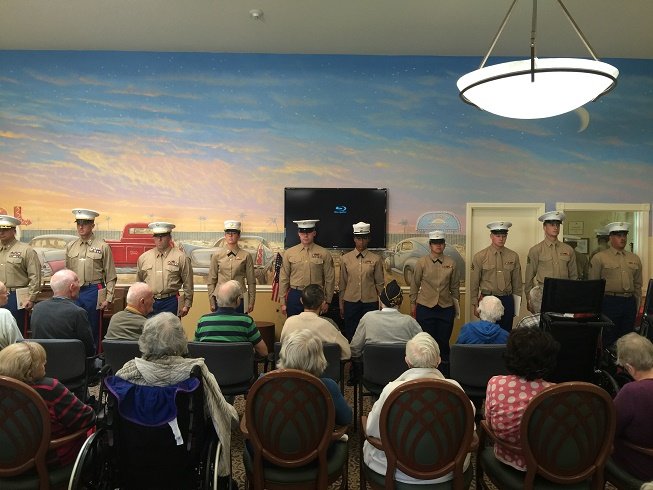 From beginning to end, the ceremony was a celebration of service and outpouring of patriotism. Professional bugler Roy Zanni performed “Taps.” Each honoree’s name was intoned to hearty applause.

Event coordinator Jackie Lleverino, HNC Director of Admissions and Community Development, says the ceremony left a lasting impression on everyone, including herself. She notes, “It was an intensely emotional day. The veterans were visibly moved by the individual recognition of their experiences. By the culmination, there was not a dry eye in the house, even among the Marines! After the event, an ActivCare staff member told me that the ceremony made a wonderful impact on the residents and their families. HNC is looking forward to finding opportunities to continue honoring our aging veterans.” 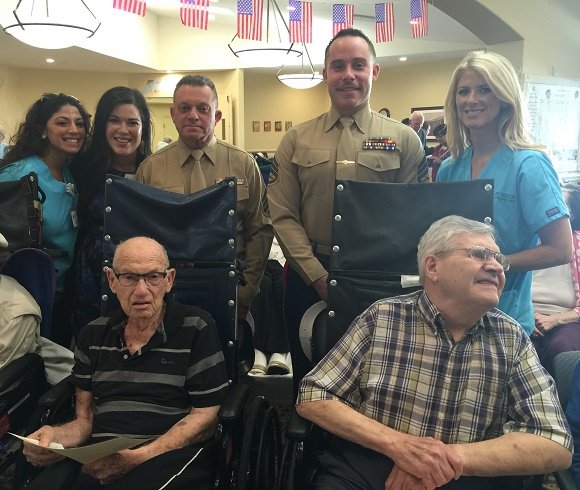 HNC is Well-Positioned to Help Veterans and Families During Their Time of Transition – WHV is a program established by the National Hospice and Palliative Care Organization (NHPCO; www.nhpco.org) that is focused on continually improving the end-of-life care veterans receive.

As a Level Three partner, HNC has demonstrated the organizational capacity to ensure that veterans facing a life-limiting illness have access to veteran-centric care. Lutz explains, “We understand the unique circumstances and needs that set veterans apart from non-military patients and address challenges specifically related to their service, and its aftermath.”

The need is especially great in our region. According to recent statistics, nearly seven of ten males in San Diego County age 65 and older are veterans. They came from southern towns, Midwest metropolises and other locales, small and large. They served in an array of military branches and in different conflicts and countries. Ultimately, they settled in our beautiful area and now many need or will soon need hospice care. Lutz believes, “Being able to honor them in their lifetime is a beautiful privilege for us.”

Nonprofit Hospice of the North Coast was established in 1980 to fill the need for comprehensive, compassionate hospice care in North County San Diego. Since its inception, it has grown in services, staff and clients. It currently provides a full spectrum of programs to terminally ill patients and their families, including bereavement support, as well as inpatient care at Carlsbad-based Pacifica House, North County’s first and only hospice residence.

Ray Patchett Elected Board President of Hospice of the North Coast

HNC Welcomes Three New Board Members to Its Board of Directors