The historic Hotel del Coronado and EPIC Entertainment Group have joined forces for this holiday season in decking out the historic hotel in amazing, colorful decorations and ornamentations for both the inside and outside of the hotel as well as designing and producing a spectacular 11-minute holiday light show spectators can watch on Founders Lawn.

The massive lightshow features over 50,000 lights hung from the 140-foot-tall historic pine trees located in Founders Lawn. These pine trees are over 100 years old and are the world’s first electrically lit outdoor living Christmas trees, first seen by visitors to The Del in 1904. The debut of the lightshow, entitled “At First Light”, began with the installation by EPIC Entertainment on November 4th. The hanging of the lights and coordination and sequencing of the colors to the selected Christmas music took about one month to complete for the November 22nd premiere. Viewing the lightshow is free for all spectators and will last until January 2nd, beginning at dark and running every 30 minutes until 9 p.m. Also available for photo ops was a large ornament arch above the main walkway. Charity Hill, Co-Founder and Managing Partner of EPIC Entertainment Group said the following about the debut of the light show, “As a leader in storytelling through creative experiences, it only makes sense for us to dream up new delights for Hotel del Coronado guests to immerse themselves in, like the debut of a holiday light show showcasing the more than 100-year-old trees. We are grateful for the opportunity to expand our creative expertise and magnify theme curation and guest immersion through design and décor.” 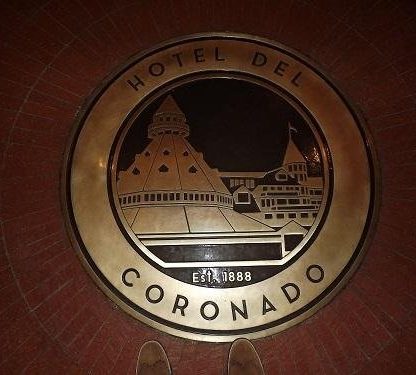 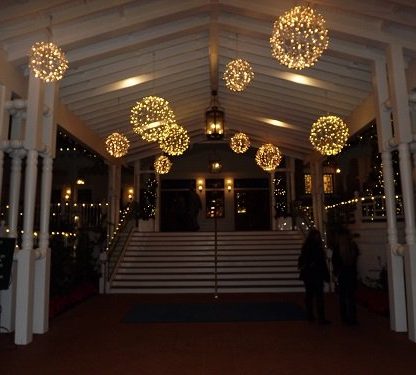 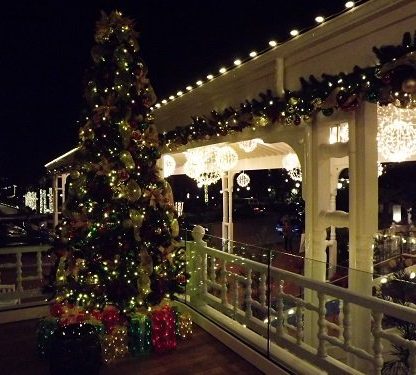 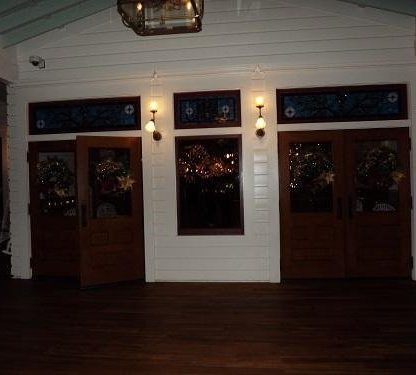 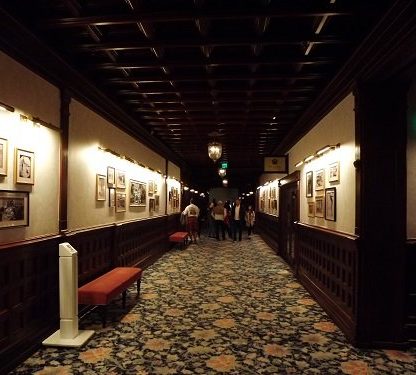 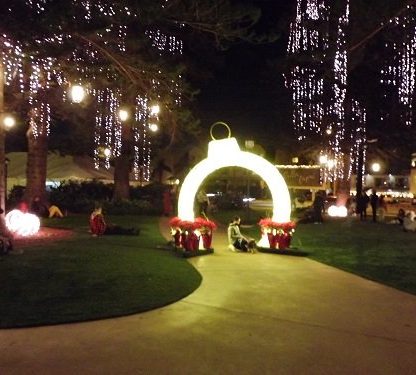 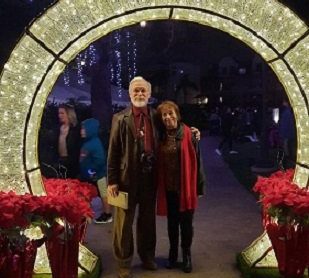 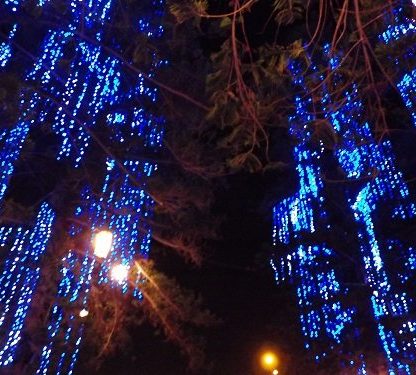 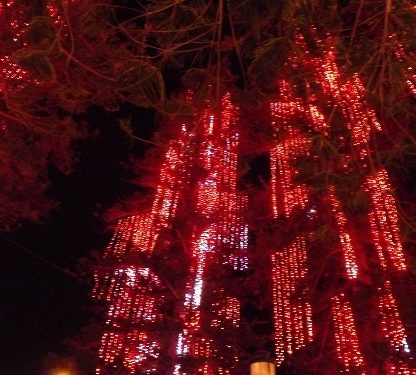 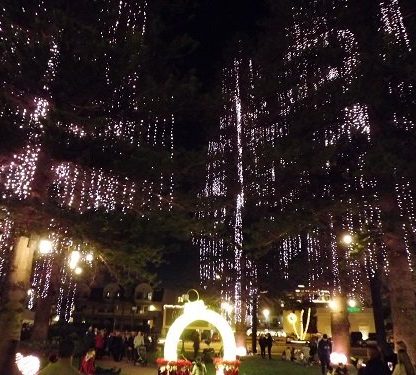 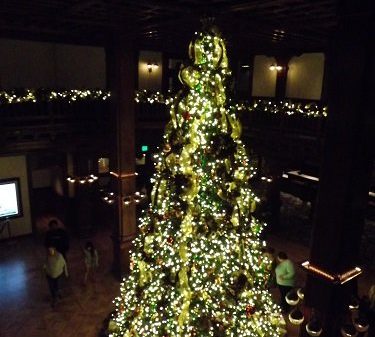 On an evening arranged by the firm of Victori Solutions, the PR firm in coordination with EPIC and The Hotel Del Marketing and PR Events Team, we were recently able to experience a media tour of the color, magic and festive atmosphere both inside and outside of The Del. After viewing the light show, our group followed Charity Hill, along with EPIC Co-founder Steve Sheldon and Tori Elder and Marissa Spencer of Victori Solutions as we entered the main entrance of The Del, into the historic Lobby, called The Rotunda. In the center of the Lobby was another EPIC décor creation, the 23-foot-tall Lobby tree decorated with 10,000 lights and 2,000 ornaments. Various copies of the ornaments were available for sale in the hotel gift shop. The railing of the second-floor balcony around the tree was outlined with garland and lights. Our group was then led out to the large garden area plaza in the middle of the main Victorian Hotel section and featuring the four floors of the original hotel, built in 1886. In the middle was a 25-foot decorated Christmas tree, also designed by EPIC. 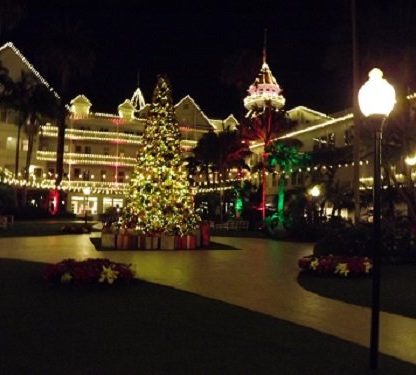 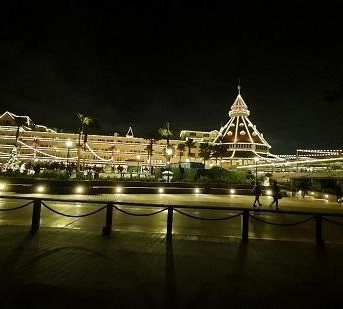 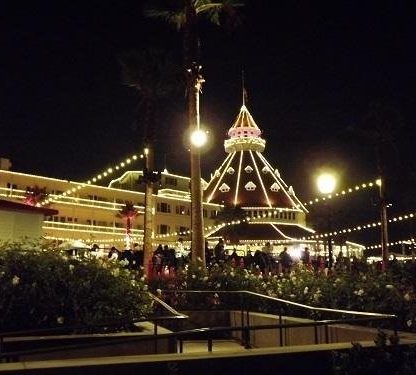 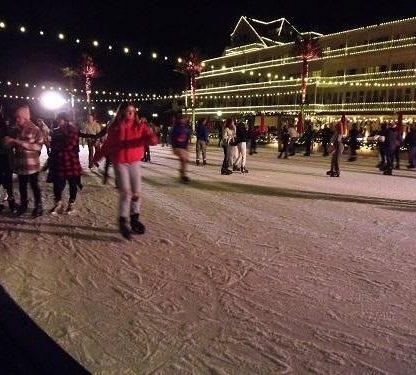 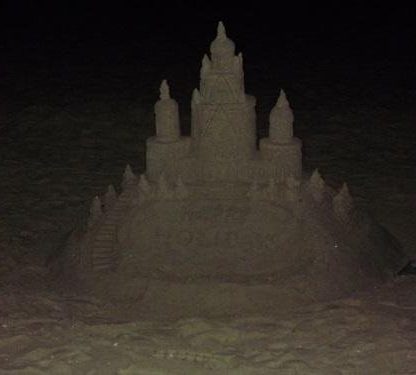 The evening continued as we walked to the outside back area of The Del. This part of The Del had a number of the restaurants, cocktail lounges and other eateries crowded with guests and others who had arrived to take part in the other main feature found at The Del during this time of year, the large ice skating rink, called “Skating by the Sea”, where for $35, $30 for military and First Responders, anyone can enjoy the experience of skating on ice in Southern California. The rink was packed along with guests gathered on the side walls watching and others sitting near-by enjoying drinks and “bites”.

Another treat we enjoyed was a short stroll to the walkway along the beach to two fire pits where our group was allowed to indulge in a selection of dark, milk and white chocolate, marshmallows, and Graham Crackers to melt over the fire for delicious S’mores, along with champagne, the perfect end to a festive experience at The Del.

For anyone who wants to experience the holiday spirit The Del has to offer, the following activities are offered. Guests can sign-up to build Gingerbread Houses, take part in Victorian Tea, have a Jingle Roast with S’mores on the beach, have presents delivered to your room by Elves, watch Holiday movies on the Beach and get photos with Santa, along with seeing the “At First Light” show and seeing the 20 Christmas trees, themed to “Home for the Holidays”, decorated and in various locations around The Del. Guests can also walk through the renovated Shopping areas or walk down hallways and look at the many photos from years past highlighting the history of The Del through the last 133 years.

There are a number of restaurants, eateries, cocktail lounges and bars available. Guests and patrons can try delicious food selections at Sun Deck, Babcock & Story Bar, Sheerwater and Serea as well as buffets in the famous Crown Room and Coronet Room. Times, menus, hours and days of operation are available online. If you want to stay at The Del there are a number of accomodations offered, each with unique features. The Victorian, The Cabanas, The Views, Beach Village and Shore House can offer visitors incredible experiences, vistas and unique experiences. For complete descriptions about the restaurants, holiday activities and various places to stay at The Del, go to www.hoteldel.com, call 619-535-6611 or 1-800-HOTEL-DEL.

Facts about The Hotel del Coronado

This iconic hotel is a must see during the holiday season for San Diego County residents and anyone visiting San Diego. There are numerous activities to take part in at The Del, great restaurants to try, a wide selection for places to stay and now, an amazing and spectacular light show to watch and to get you in the holiday spirit.