TR Robertson — Six strangers board a train, at various times, each with emotional baggage weighing them down, with no intention of sharing their issues with anyone else. But, in Keith Bunin’s play, “The Coast Starlight”, we are allowed to glimpse the “woulda, shoulda, and coulda” of encounters that might have made a huge difference in these people’s lives if only they had made just a touch of human contact with one another.

The Coast Starlight is the name of the train that runs from Los Angeles to Seattle, a 36 hour trip with stops along the way, a distance of nearly 1,400 miles. Hundreds of passengers board and disembark the train at each of the stops. Each person boarding the train has a story; is either having a good day-a bad day or a so-so day; they have people in their lives or are trying to take on their problems by themselves. Many are emotionally damaged, but unless you know their story you cannot offer assistance. Such is the story on stage at the La Jolla Playhouse Sheila and Hughes Potiker Theatre in Keith Bunin’s World premiere of his play “The Coast Starlight”. 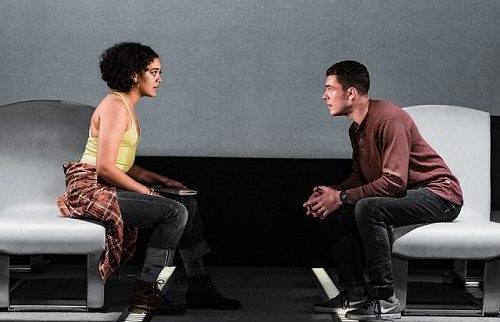 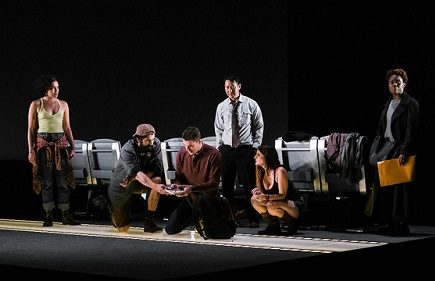 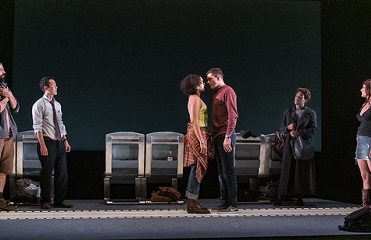 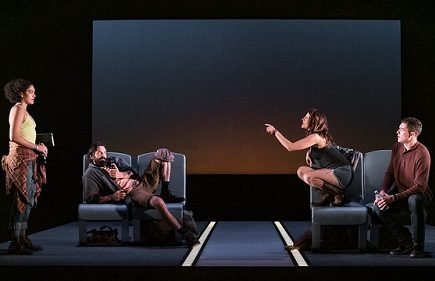 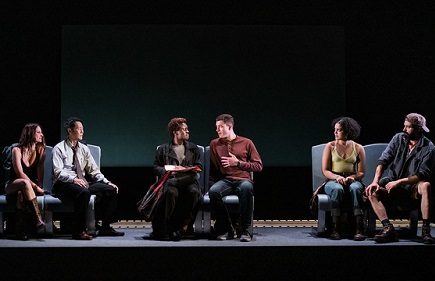 All six of the actors and actresses for the play are making their La Jolla Playhouse debut, many with Broadway and Off-Broadway experience. As we begin to meet the six people on the train we first meet TJ, played by Nate Mann. TJ is a Navy medic who has served time in Afghanistan and is struggling with a huge emotional decision that will change his life forever. Mann presents TJ with a warm, caring personality, but a person who is conflicted and indecisive about the course his life should take. We also meet Jane, played by Camila Cano-Flavia, a bubbly, emotionally cautious artist, the daughter of math professors, on the way to Seattle to meet her boyfriend and make a decision about her romantic life.

Along the way four additional passengers will take seats in the train car, each of them battling personal decisions about their life. Next on board is Noah, a veteran of the war in the Mid-East. He is played by Rhys Coiro. Noah is a gruff, “standoffish” fellow and a person who has bounced around from job to job, currently living on a friend’s boat. He has learned to repress the harsh memories of the war, unlike TJ. Noah is on board to go to Klamath to take care of his aging mother. The trip continues as Liz arrives, played by Mia Barron. Liz is loud, opinioned, funny, a fast talker and appears a little emotionally unstable. She has lived in many places and has been involved in numerous relationships. She feels there are people who are poisonous in relationships. As the trip continues, TJ, Liz, Noah and Jane go back and forth as they discuss each other’s situations, the imaginary encounter they could have had.

The final two passengers, for this possible emotional encounter these people could have had, include Anna, played by Stephanie Weeks, and Ed, played by Rob Yang. Anna is a mom who has just had to deal with the death of a drug abusing brother and Ed is a traveling salesman, recently divorced and on the way to being an alcoholic. Anna is caring, struggling emotionally with the death of her brother and haunted by guilt. Ed is a loud, arrogant drunk on his arrival, but after sobering up is funny, embarrassed, lonely and looking for answers as he feels he is near rock bottom in his life.

“The Coast Starlight”, developed through the 2018 DNA New Works Series, is under the direction of Tyne Rafaeli, who recently directed “Usual Girls” at the Roundabout Theater Company in New York and received a Drama Desk Nomination for Outstanding Director. This cleverly designed play takes place on a revolving stage with movable train styled chairs that are slid around depending on what is going on with each performer. The Creative Team includes Scenic Designer Arnulfo Maldonado, Costume Designer Denitsa Bliznakova, Lighting Designer Lap Chi Chu, Sound Designer Daniel Kluger, Dramaturg Shirley Fishman and Stage Manager Ashley R. Martin.

The play allows us to peek into the emotional lives of these people and realize everyone might have something personal or emotionally draining to share, especially if they could be helped by simply speaking with another person. The play presents a compassionate look into the lives of these individuals without offering the answers to each of their concerns. Sometimes there are no specific answers for an individual. At times it has to get a little worse before it can get any better. As Bob Dylan says in “Trying to Get to Heaven”, “When you think you’ve lost everything, you find out you can lose some more.”

NEXT ARTICLE →
Are you a Wed. or Sat. person? 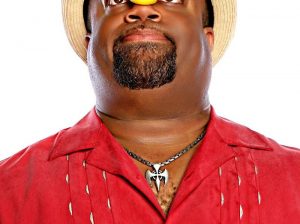