TR Robertson — Married Actors Katie MacNichol and Bruce Turk present a don’t miss performance of Bernard Slade’s romantic comedy “Same Time, Next Year”, that covers a 25-year love affair between two married people after a chance meeting and one wild weekend. The latest online production, now streaming, is presented by North Coast Repertory Theatre after their successful presentation of “Necessary Sacrifices”. Artistic Director David Ellenstein directs MacNichol and Turk in this acclaimed romantic comedy that was nominated for three Tony Awards and four Drama Desk Awards in 1975 and ran on Broadway for four years and was adapted into a movie in 1978 starring Alan Alda and Ellen Burstyn. The comedy will take viewers through 6 time periods, beginning in 1951, when George and Doris first meet and will end in 1976. 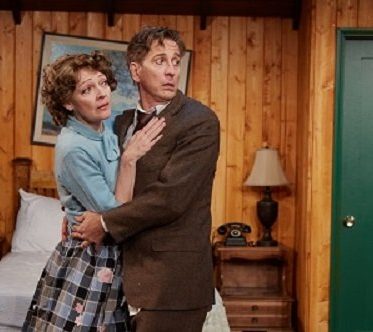 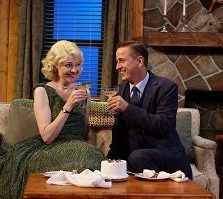 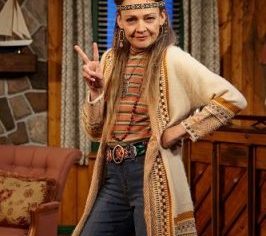 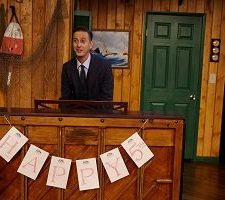 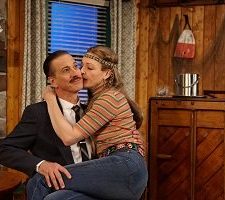 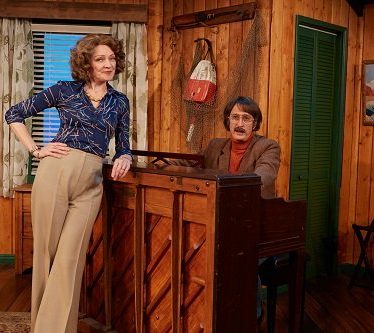 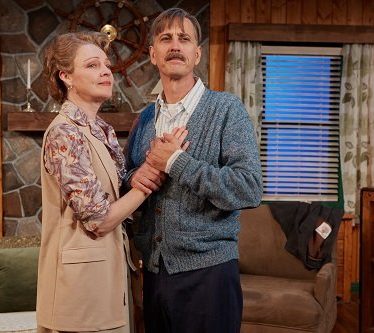 Critics referred to the play as a “funny comedy about love and adultery”. The two-person play opens in 1951 with George Peters in bed with Doris, having just spent a romantic evening together after meeting at a bar in Northern California. George, living in New Jersey, is a CPA visiting a friend to do his taxes and Doris is on her way to a retreat at a Catholic monastery. Both are married, George to Helen and Doris to Harry. We only hear about the spouses through stories George and Doris share. They also have three children each. Doris is a housewife who never graduated from high school. Neurotic George has fallen for Doris but is genuinely worried about what he has done. Doris takes the whole situation as “matter of factly”. George seems to overthink everything; this will be a common theme in the play. By the end of Scene 1, the couple has decided to meet every year, on the same weekend.

The comedy will next take viewers to 1956, Doris having moved to the suburbs in Calif. and George having moved to Connecticut, still married. Doris is now a blonde and George has 4 children and is still as neurotic as ever. We next see them in 1961, with George facing bouts of impotence as he and Helen are having issues and Doris arrives, very pregnant, yet having sex dreams about George and water. A surprise ending to this scene again shows George’s extreme excitability. Next, we are in 1965 and George is living in Beverly Hills, with Helen, in a new job and a staunch member of the establishment. Enter Doris, now a college student and a member of the Hippie generation. Verbal battles ensue and this emotional scene ends with a sad revelation by George. Scene 5 takes us to 1970, Doris running a catering business and George now the one dealing with self-discovery and dishing out life therapy to Doris. George even finds time to help Doris’s husband, unbeknownst to Doris. The final scene, we are in 1976, George teaching part-time at UCLA and Doris partially retired, a grandmother and helping husband Harry recover from a heart attack. George has some emotional news about his own life with Helen and has an announcement for Doris.

In the play we see this couple, through the years, grow, change, deal with sorrow and happiness with both their own families and with their relationship and struggle with a very unusual, yet very loving love affair. It is noticeably clear, in the performance, that Katie and Bruce are bringing their own personal chemistry to this play and there are genuine emotions between this couple. They present Doris and George as two people with issues and idiosyncrasies, like all of us. People who want more out of life but are afraid to change the comfortable life they are living. People that love their partners but feel there is more to life than what they are experiencing. Clever dialogue, humor, tenderness, sadness, and emotion are brought out throughout the years of change with the couple. As you hear them tell their stories, you empathize with them and begin to understand why this unusual relationship works for them. George tells Doris in the final scene, “For 24 years I’ve never been out of love with you”. It is not your typical adulterous affair, nor your typical love story, but it is a wonderfully designed romantic comedy well worth going online to see.

The NC Rep play has a set designed by Scenic Designer Marty Burnett, Costumes by Elise Benzoni, Hair/wigs by Peter Herman, Cinematographer/editor Aaron Rumley, and Properties by Phil Korth. Managing Director is Bill Kerlin. “Same Time, Next Year” will stream on www.Showtix4U.com and or you can go to www.northcoastrep.org for more information. The play will run until November 15th.

Take a short break in your day, sit back and watch “live” theatre at its best in a beautifully designed and performed play.