WHAT:  The North Coastal Prevention Coalition (NCPC) is getting a head start on its prevention message to students and parents by sponsoring the annual “420 Remix – A Celebration of Sober and Drug-Free Life Choices” at Boomers! This positive, drug-free event will include pledging to make positive choices on April 20 – a day that is promoted as an unofficial marijuana-smoking holiday. Vistans approved Measure Z in November 2018, which allows 11 storefront marijuana dispensaries in the City of Vista. Now more than ever, NCPC encourages parents to send clear messages to their children. According to research findings, children whose parents have a positive attitude towards marijuana use are five times more likely to use marijuana by 8th grade. One of the key reasons teens choose NOT to use drugs is because they know their parents don’t approve of it. A parent resource area and workshops will be set up in the parking lot of Boomers! Parents can learn effective prevention strategies while middle school students enjoy an afternoon of drug-free fun. The event is open to middle school students from Carlsbad, Oceanside and Vista and provides free entrance to Boomers! Learn more about 420 Remix Boomers! event at: http://northcoastalpreventioncoalition.org/programs/marijuana-prevention/420-remix-2/ 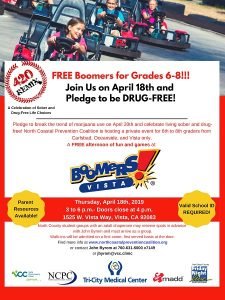 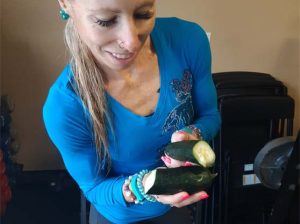