Warning: A non-numeric value encountered in /home/customer/www/thevistapress.com/public_html/wp-content/themes/dailypress/include/breadcrumbs.php on line 54
Calendar >  Locally Sourced: A Spotlight on VUSD’s WaveCrest Cafe And Their Vendors

Locally Sourced: A Spotlight on VUSD’s WaveCrest Cafe And Their Vendors

Print
Martial Bricnet makes a lot of dough for the Vista Unified School District — enough to make 300+ pizzas a day for the district’s cafe brand, WaveCrest Cafe.
“I figure about 1800 kids a day have our product,” Bricnet says with pride.
He’s the chef/owner of Colors Gourmet Pizza, which supplies dough to fine restaurants, hotels, resorts and theme parks in a dozen states.
Bricnet and Colors also supply WaveCrest with whole wheat pizza crusts that meets the USDA requirements for whole grain products while also maintaining a familiar taste and texture of traditional pizza crusts.
“In a perfect world, we’re helping to make kids discerning diners,” he laughs.
“Really, our task is to provide children with something healthy in spite of themselves.”
Colors has been open since 1991. The first location in Encinitas had a slightly different concept than what finally evolved.
“My wife and I wanted to open a restaurant that a family could go to after work that wasn’t a chain restaurant,” Bricnet says. “We wanted a simple menu, but we had a hard time agreeing on the style of pizza.”
Part of the doughy debate was regional: Bricnet grew up in the Beaujolais area of France while his wife grew up in Pennsylvania and had other ideas.
“It took some time. We had to play with different types of doughs,” he says.
The final dough they agreed on ended up making them lots of bread. A regular customer who was also an executive chef at a hotel asked Bricnet to make crusts for his room service customers.
“A chef will often farm out working with bread, such as proofing the dough because baking is a world within itself,” Bricnet explains. “Plus, you have to invest a lot of manpower dedicated to making the dough.”
The crusts were a hit with the upper crust. By 1994, Colors was making more pizza crusts for others then the restaurants. Bricnet and crew moved to a bigger spot in Carlsbad that same year.
Business grew to the point where they relocated again in 2009 to their current location: A 15,000-square-foot facility in Vista.
A short time later, Colors became one of the many vendors working with WaveCrest Cafe to ensure healthy meals for Vista Unified students.
“They were using frozen pizza dough balls because they didn’t have the space to make them fresh, so I invited them to see what we were doing,” Bricnet says.
The pizza dough process used by Colors allows them to make the crusts 20 hours in advance, giving them plenty of time to rise so they are ready when it’s time to make the pies.
“It ages overnight and it’s never frozen,” he says proudly.

About six years ago, Bricnet and WaveCrest chefs knew they had to come up with a way to use whole wheat flour to help fulfill USDA requirements. That presented a challenge because whole wheat flour needs longer to hydrate than the regular flour normally used for pizza dough.

“You need a higher absorption of flour or it just becomes slush,” he says. “We overcame that by mixing the whole wheat flour with water separately and letting it sit for an hour before combining it with the other flour.”
The pizza product came out great, but Bricnet admits he had to do some additional work to make it satisfying to the young foodies who were supposed to eat it.
“We spend a lot of time talking to chefs and we realized the student didn’t care for the brown specks in the whole wheat dough,” he says.
Colors finally eliminated the speck problem in 2016 when it created a dough containing 51 percent whole wheat dough that has all the whole grain, but none of the brown specks.
“It looks like any pizza dough you might see,” Bricnet says. “That’s important because to an 11-year-old, the notion of something being good for them means nothing.”
The formula is working, as evidenced by a recent WaveCrest Café menu survey, taken by over 2,500 VUSD students. The survey asked students to rank their top three menu items, and as it has in every survey, WaveCrest Pizza came out on top as the winner.
This story and images can be found on the WaveCrest Cafe website: https://wavecrestcafe.com/news/locally-sourced-colors-gourmet-pizza/
Print 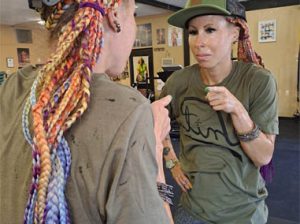 Healty Community Healthy You: Talking To Yourself: There’s No Better Listener