TR Robertson  — “Murder For Two” Keeps You Laughing and Guessing at New Village Arts in Carlsbad… There’s murder afoot in Carlsbad in the farcical murder mystery musical comedy “Murder For Two”, currently on stage at New Village Arts Theatre in downtown Carlsbad. This zany 90 minute musical is more vaudevillian stage show than musical with two actors leading the audience through a nonsensical romp that would leave Agatha Christie smiling. One actor plays one character, a “wantabe” police officer striving to be a detective, and the other actor portraying as many as 10 possible suspects in this unusual murder case. This clever murder mystery musical comedy was written by Kellen Blair, who also wrote the lyrics and Joe Kinosian, who also wrote the music. The comedy musical ran off-Broadway from 2013-2014 at the McGinn/Cazale Theatre and New World Stages where it received a Drama Desk Award and an Outer Critics Circle Award.

This classic “who-done-it” is set in what appears to be a backstage area of some theatre, but it will soon transform into the New England residence of Arthur Whitney, the great American novelist who uses family members and acquaintances in each of his novels. Most of the stories don’t show the family members in the best light. The on stage props that will be the scene of interrogation of suspected murderers consists of a small couch, a chair, a hanging red curtain and the often used grand piano, the only musical instrument for this musical. 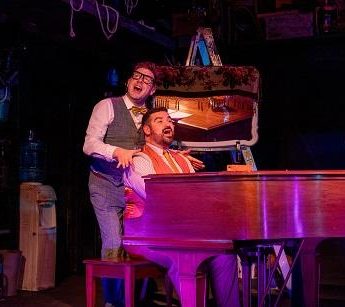 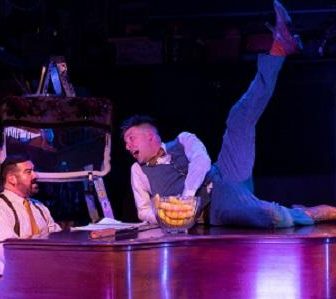 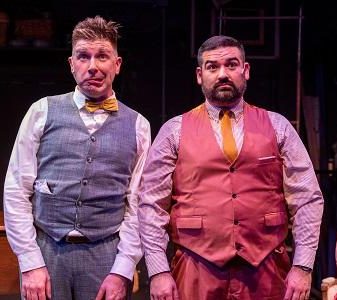 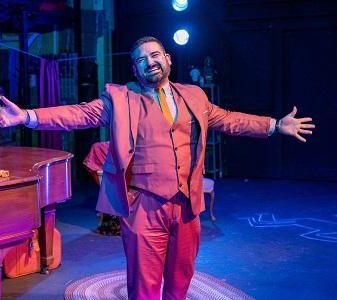 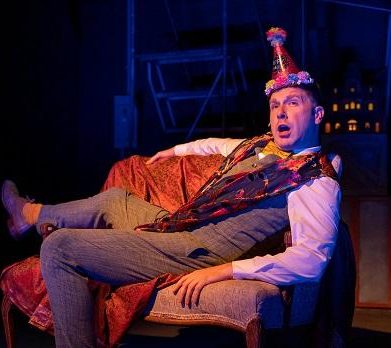 We never see Arthur Whitney except as he appears on the stage floor as a chalk outline. JD Dumas plays Marcus Moscowicz, the aspiring detective who arrives at the scene of the crime first. This is Dumas’s NVA debut. He has been in a number of regional productions, including directing shows at Moonlight, Legoland and theatres in Utah. JD has a great vocal range and an accomplished pianist. He presents Marcus as a man searching not only for recognition in his job, but also possibly looking for another romantic relationship, after going through a failed relationship with former girlfriend Vanessa, who turned out to be a little more than he imagined. Dumas shows the frustration he goes through as he interrogates the very unusual family members and other suspects at the Whitney home. He is concerned about following the correct protocol in the investigation, singing “Protocol Says”. He occasionally carries on a conversation with Lou, a police officer we can’t see, but can only imagine is there. Dumas and fellow actor Tony Houck work well together and play off of one another with ease, including several funny and amazing duo combinations on the piano.

The other cast member of this two person show is Tony Houck, the Music Artistic Associate for New Village Arts, working with numerous other shows at NVA, He has also been a three time San Diego Critics Circle Craig Noel Award nominee. He will be directing the upcoming presentation of “Into the Woods”. Houck has the distinction of portraying an amazing array of characters for this murder mystery musical. These characters he brings to life on stage include the unmornful widow of Arthur Whitney – Dahlia; the prima ballerina Barrette Lewis; a feisty older couple who accuses one another of committing the crime; an aspiring criminology student who has eyes for Marcus – Steph; an old psychiatrist with a German accent – Dr. Griff – who we also find out has been treating Marcus; 3 members of what was once a 12 member boys choir – Timmy, Yonkers and Skid – these boys are more scoundrels than choir members and several other characters thrown in for good measure.  Houck, at times in a rapid fire series of voice and character changes, flows through the murder mystery in an amazing portrayal of these very different murder suspects. We follow his series of characters by identifying them with certain hats or scarfs or glasses or mannerisms. It is a wonderful display of comedic talent on stage as he couples silliness with physical comedy and this has the audience constantly laughing as we watch Marcus interrogate each of the suspects. Houck and Dumas are a wonderful comedic pair.

This is a musical after all, with most of the songs sung as we see the interrogation of each individual. There is even a bit of a love song as Steph wants to partner up with Marcus in the investigation, “He Needs a Partner”. One of the funniest moments is when Marcus interrogates the prima ballerina Barrette, who for a brief moment we believe is the murderer, “So What If I Did?”. Another fun scene occurs when Dr. Griff is killed by drinking poisoned tea and an audience member is brought on stage to portray the deceased Doctor, later shown through another chalk outline.

This is a funny, witty, over-the-top murder mystery musical comedy. Who killed the novelist?, who killed the psychiatrist?, who stole the ice cream? – another part of the murder mystery. You will have to take in this classic tale to find out. Tickets for “Murder For Two” can be purchased at www.newvillagearts.org or call 760-433-3245. The musical will run at NVA, located at 2787 State Street in Carlsbad, until March 1.