Warning: A non-numeric value encountered in /home/customer/www/thevistapress.com/public_html/wp-content/themes/dailypress/include/breadcrumbs.php on line 54
Calendar >  Mysterious Objects and Places in the United States – Part III

TR Robertson — The final installment of Mysterious Objects and Places in the U.S. will cover many places and objects you may have never heard of. There are still hundreds of these mysterious sites out there, but hopefully you have enough in the three-part series to add unfamiliar places to visit, stop by or investigate in more depth as you begin to travel more in the U.S.

Mount Rushmore Chamber – Rapid City, South Dakota – Everyone has heard of the four U.S. Presidents carved into the hills of Mt. Rushmore, but did you know there is a chamber carved into the granite cliff directly behind the four Presidents? Sculptor Gutzon Borglum had incredible plans for a large chamber to be carved out that would house a collection of historical documents from our history, but his plans were not completed before his death. There is a 20 ft. opening carved that enters a room 75 feet deep and 35-foot ceilings. His hopes were to have a stairway access to the chamber with documents housed inside of bronze glass cabinets. There is a vault in the chamber with sixteen porcelain enamel panels inside that tell the story of the Mt. Rushmore project and a concise history of the U.S. The chamber is not accessible to the public.

Devil’s Promenade and the Hornet Spook Light – In the Tri-state area of southwest Missouri, southeast Kansas and northeast Oklahoma, residents and visitors report seeing numerous times a fire like orb, describe in varying sizes from a baseball to a basketball, dancing and spinning down the center of the road at high speeds. It will then hover above treetops before disappearing. Many discussions as to what the object is, most centering around ball lightning.

The Dighton Rock – Berkley, Massachusetts – This 40-ton boulder was originally located in the riverbed of the Taunton River. It is known for the petroglyphs and carved designs of ancient and uncertain origin and no translation of the language on the boulder.

The Great Serpent Mound of Ohio – Adams County, Ohio – The Serpent Mound is a 1,348 foot long, three-foot-high prehistoric effigy mound on a plateau along Brush Creek. The winding mound is built to resemble a snake with a gaping mouth and is the largest effigy mound in the world. The mound is thought to be between 1,500 – 2,000 years old, but no official date has been established as well of no specific knowledge of who constructed the effigy mound or its specific use.

The Nevada Triangle – The 25,000 sq. mile area lying in the Sierra Nevada Mountain ranges of Nevada and California is said to have been the site of the disappearance of over 2,000 planes since the 1960’s. Most of the planes have never been found. Explanations for the considerable number of disappearances range from unusual atmospheric occurrences to UFO activity. This range does include the mysterious Area 51 Air Force base.

Stone Chambers of New England – Hundreds of stone structures are found all over New England that have a design and form found nowhere else in the U.S. Many historians say they were built by early colonists as root cellars, others say they were constructed by Native Americans prior to the settling of Europeans. Others say they go back further to travelers from the Bronze Age who could have reached the Americas.

Shanghai Tunnels – Portland, Oregon – The underground tunnels were constructed under Portland’s Chinatown over 150 years ago. Supposedly constructed to moved goods easier from the wharf to various business, they also have a history of illicit activity, prostitution, crime, violence, and murder. The tunnels still exist today and are said to be a place of extreme paranormal activity.

Hotel Monte Vista – Flagstaff, Arizona – This historic 73 room hotel has been fully restored to its 1927 glory. It has been the hotel to a number of famous stars including Clark Gable, John Wayne, Humphrey Bogart, Anthony Hopkins and Bing Crosby as well as being used in the filming of the 1942 classic “Casablanca”. Along with all of this, the hotel has been the site of a number of paranormal sightings like the Phantom Bell Boy, the former long-term guest called the “Meat Man” known for hanging raw meat from a chandelier and the murder of two prostitutes many years ago. Several rooms are said to be more active like room 220 and room 305, said to be the home of an apparition that appears in the window in a rocking chair.

Barren Pines, New Jersey – Called the Pinelands of just the Pines, this home to Atlantic Coastal Pines is a densely forested area. Just beyond the Pines are the ruins of mills, ironworks, general stores, and workers’ homes, what is left of once thriving industries in the late 19th century. The Pines is also said to be the home of the Jersey Devil, a creature with wings, a goat’s head, and hooves. The creature is said to have been born to a woman in 1735 and has haunted the forest and surrounding area ever since with numerous sightings recorded over the years.

Lincoln Park Zoo – Chicago, Illinois – This is said to be the most haunted zoo in the world. The zoo sits on the site of a cemetery that was used until the mid-19th century. When it was decided to build a zoo at the site, the majority of the 35,000 bodies buried there were removed, but not all of them. Reports say apparitions have been seen in the evenings in the central park of the zoo where the cemetery was once located.

Poinsett Bridge – Greenville, South Carolina – This oldest bridge constructed in South Carolina has been in existence since 1820, named after a prominent local resident, Joel Poinsett. Historians believe the Gothic bridge was designed by Robert Mills, the architect of the Washington Monument. Ghosts are said to be around the bridge ranging from a man who died in a car accident on the bridge to a construction worker who is said to be entombed inside the bridge.

Georgia Guidestones – Elberton, Georgia – This unusual monument in Georgia was commissioned by a man with a pseudonym of R.C. Christian and “a small group of loyal Americans who seek the Age of Reason.” The Elberton Granite Finishing Company was furnished with a detailed model and specific instructions for the sizes, dimensions, location, and other specific information. The monument was unveiled in 1980. There are five tall (19 ft.3 in) granite slabs, one in center with four around the center slab and a granite capstone on top. All of these are astronomically aligned with the celestial pole, travel of the sun and noon time throughout the year. What makes this monument even more unique is that the sides of the slabs have a set of ten guidelines carved on them in eight modern languages (English, Spanish, Swahili, Hindi, Arabic, Hebrew, Traditional Chinese and Russian). The capstone has four ancient languages – Classical Greek, Sanskrit, Babylonian (cuneiform), and Ancient Egyptian hieroglyphs. Called the “American Stonehenge,” conspiracy theorists have said the group, who commissioned the monument must have been sun worshipers to a cult to devil worshipers to members of a New World Order. Other than a brief explanation as to why the monument was carved, no other information is available on who or why the monument was built. 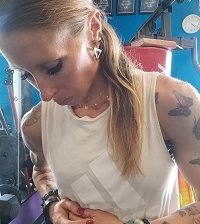