Solana Beach, CA. – Cherished by audiences and critics alike both in America and abroad, Bernard Slade’s wickedly funny comedy explores a 25-year love affair between two seemingly ordinary people who meet once a year. SAME TIME, NEXT YEAR deftly examines the monumental political, social, and most of all, the personal changes that impact the lovers during that quarter century. Full of zippy dialogue, keen observations, hilarious visuals (the clothes! the hair!), and unexpected admissions, this play will have you laughing uproariously one moment and wiping away tears the next. 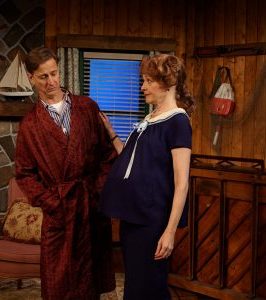 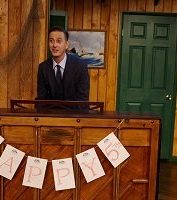 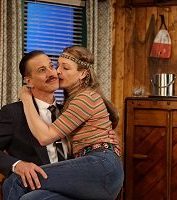 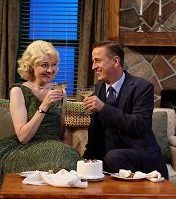 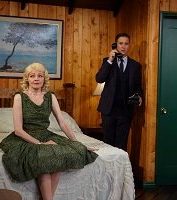 David Ellenstein directed married actors Katie MacNichol and Bruce Turk on North Coast Rep’s mainstage, adhering to all mandated safety and testing procedures under the SAG New Media Agreement. The actors are wed to each other, adding a layer of intimacy to the story. Audiences will see a full theatrical production with sets by Scenic Designer Marty Burnett and costumes by Elisa Benzoni and Hair/Wigs by Peter Herman. Cinematographer/editor Aaron Rumley filmed the show. Settle into a cozy spot and surrender to the buoyant charms of SAME TIME, NEXT YEAR.

SAME TIME, NEXT YEAR will stream on Showtix4U.com October 21 through November 15. Tickets are $35 and can be purchased at www.northcoastrep.org.

BERNARD SLADE (Playwright) (May 2, 1930 – October 30, 2019) was a Canadian playwright and screenwriter. As a screenwriter, he created the sitcoms The Flying Nun and The Partridge Family. As a playwright, he wrote Same Time, Next Year, Tribute, and Romantic Comedy and their film adaptations. He received a Tony Award nomination for Same Time, Next Year, and an Oscar nomination for the screen adaptation.

BRUCE TURK (George) North Coast Rep: Faded Glory, Freud’s Last Session, Hedda Gabler, At This Evening’s Performance, Now You See It (director), has performed On and Off Broadway, internationally, and at major regional theatres across the country. He has been a resident member of Tadashi Suzuki’s Acting Company in Japan, a Resident Artist at Hartford Stage, and a recipient of the TCG/Fox Fellowship for Distinguished Achievement. San Diego audiences have seen his work in fifteen productions of Shakespeare at the Old Globe Theatre, where he received the San Diego Critics’ Craig Noel Award for Leontes in The Winter’s Tale. Other credits include seasons and productions at American Conservatory Theatre, Pasadena Playhouse, Seattle Repertory, McCarter Theatre, La Jolla Playhouse, The Denver Center, The Cincinnati Playhouse, The Goodman Theatre, The Shakespeare Theaters in DC, New Jersey and Santa Cruz, and many more. Screen credits include “Murder in the First,” “NUMB3RS,” “ER,” “L&O:SVU,” and “Third Watch.” He is a graduate of Northwestern University.

KATIE MACNICHOL (Doris) North Coast Rep: At This Evening’s Performance has appeared on Broadway in The Green Bird and Two Shakespearean Actors and off Broadway in The Cider House Rules, King John and The Food Chain. In London she played the title role in A Chaste Maid in Cheapside at Shakespeare’s Globe. As a member of The Old Globe Shakespeare repertory company she appeared in As You like It, Comedy of Errors, Macbeth, A Winter’s Tale (Craig Noel Award), The Merry Wives of Windsor, Twelfth Night, and others. Regional work includes: Fallen Angels at Pasadena and Laguna Playhouses, Good People at La Mirada and lead roles at Mark Taper Forum, Yale Repertory, Baltimore Center Stage, McCarter, Denver Center, Shakespeare Santa Cruz, Dallas Theater Company, Shakespeare Theatre of N.J., Westport Country Playhouse, Williamstown Theatre Festival and Portland Stage Company. Film and TV: “Law and Order: Criminal Intent,” “Medium,” “The Practice,” and Spike Lee’s “Bamboozled.” BFA: N.Y.U. Tisch School of the Arts. MFA: Lesley University.

AARON RUMLEY (Cinematographer/ Editor) has worked on over 120 shows at North Coast Rep, over 50 as a stage manager, over 20 as a designer.

ELISA BENZONI (Costume Design) is thrilled to be working on her fourth season at North Coast Rep including numerous Craig Noel Nominated productions. Elisa has also worked on over a hundred productions across Southern California with theatrers such as The Old Globe, La Jolla Playhouse, Geffen Playhouse, South Coast Repertory Theatre, Laguna Playhouse, San Diego Repertory Theatre, Diversionary Theatre and New Village Arts. Being Italian born, Elisa has also had the opportunity to work and perfect her craft in Europe. Elisa holds a costume design M.F.A. from UCSD where she currently is an adjunct professor. www.elisabenzoni.com

PETER HERMAN (Hair & Wig Design) has previously designed wigs for over 30 North Coast Rep productions. Peter teaches wig and makeup design at San Diego State University. He is glad to be part of the creative team on this show.

About the North Coast Repertory Theatre:.. North Coast Repertory Theatre,under the artistic leadership of David Ellenstein since 2003,is a professional Equity theatre founded in 1982 by Olive and Tom Blakistone. Currently celebrating its 38th season, North Coast Rep has received critical acclaim from media and audiences alike, and has evolved into one of the area’s leading performing arts organizations. North Coast Rep prides itself on employing the majority of its actors from Actors’ Equity Association for its high quality, award-winning productions, and staging works by established and emerging playwrights. Throughout its history, North Coast Rep has created a platform where artist and audience thrive through the intimacy of live theatre, recognizing the power of theatre to challenge complacency, revitalize the imagination, nurture the unexpected, and embrace the variety and diversity in our lives.

← PREVIOUS ARTICLE
This Week at San Diego REP: A Closer Look at JQA