NC Rep’s “A Walk in the Woods”

A Study of Contrasting Yet Similar Political Agendas

TR Robertson — Solana Beach’s North Coast Rep latest production, “A Walk in the Woods”, is a cleverly crafted, beautifully acted diplomatic cultural class that will mesmerize audiences. Playwright Lee Blessing’s play takes place in the early 1980’s at a time the U.S. and Russia were involved in a series of negotiations centering around the proliferation of nuclear weapons these two super powers had accumulated and placed in various locations around the world and what it would take to curtail, disarm, dismantle and reduce the capability these two powers had in destroying the world many times over. The play is loosely based on an actual walk in the woods two real arms negotiators, American Paul Nitze and Russian Yuli A. Kvitsinsky took in the Jura Mountains on the French/Swiss border. Blessings play does not attempt to recreate the actual discussions or negotiations that went on, but it does attempt to portray the differences and similarities that existed and may still exist both politically, culturally, and socially between our two countries. 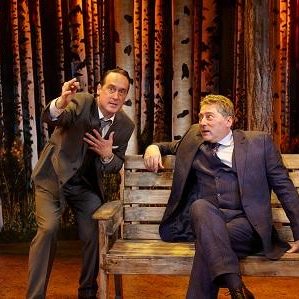 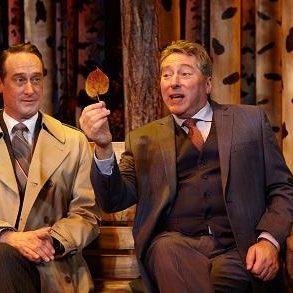 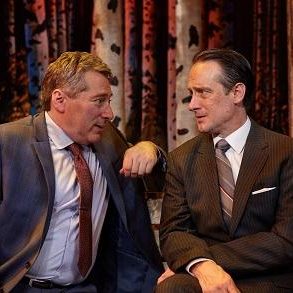 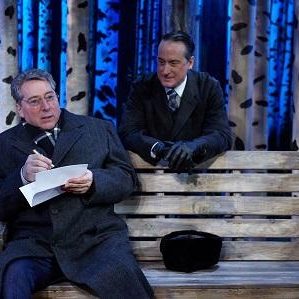 Award winning director and actor Richard Baird has masterfully presented a punch, counter-punch, spar, recoil performance on the NC Rep Stage with two veteran actors wonderfully cast to represent two arms negotiators trying to reach some sort of mutual consent they can present to each of their leaders. Playing the willy, cagey, veteran Russian diplomat Andrey Botvinnik is North Coast Rep’s Artistic Director David Ellenstein. Ellenstein has numerous acting and directing appearances to his credit, not to mention film and television appearances. Playing American arms negotiator John Honeyman and making his third appearance at North Coast Rep is J.Todd Adams. If Botvinnik is funny, Honeyman is serious; if Honeyman is on point, Botvinnik wanders around the issues; if Honeyman wants to quickly reach a conclusion, Botvinnik would rather enjoy the beauty of their surroundings. It is a perfectly designed stalemate.

Honeyman tells Botvinnik he is called The Crab in political circles because crabs do not walk in straight lines. Botvinnik tells Honeyman that by not reaching a specific conclusion gives the press and the world the appearance that they are still involved in negotiating and that gives them hope. He implores Honeyman to be frivolous, to tell a joke, to talk about anything except the nuclear arms race. Botvinnik is trying to get a “read” on his counter-part. They get in an extended discussion about their cultural and historical differences. Botvinnik is quick to point out that the United States, as a country, had numerous conquests with little competition; but Russia, as a country, has had numerous conquests with lots of competition. For this reason they are skeptical, secretive, slow to decide issues and obviously, hard to work with in negotiations.

And so they go, back and forth, up and down, thrust and jab, verbally challenging one another to try and reach some sort of agreement, if any agreement can be reached. Ellenstein’s Russian accent allows the audience to understand him with ease and he delivers Botvinnik’s quick, witty lines on point. Adams has the audience joining in his increasing frustration as the stoic, hard-nosed Honeyman runs into a continuing series of stalls put up by the clever Russian negotiator.

Adding to the total enjoyment of this play is a beautifully designed set by Marty Burnett, effective lighting by Matthew Novotny and sound by Stage Manager Aaron Rumley and costumes by Elisa Benzoni. Original Music is from Michael Roth with guitarist Peter Sprague.

99.9% of all Americans and Russians will never know what goes on behind the scenes with any deal making, negotiations, and diplomacy issues involving these nations. If it is anything like what Blessing presents in his play, it is a wonder anything gets done, but it is certainly interesting, and a little fun, to be on the outside looking in.

“A Walk in the Woods” will run at North Coast Repertory Theatre in Solana Beach until June 23rd. Tickets can be purchased at 858-481-1055 or go to www.northcoastrep.org. Next up for North Coast Rep is “Another Roll of the Dice” beginning on July 10th.