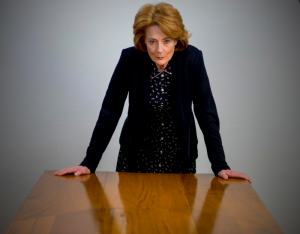 GOLDA’S BALCONY allows Golda Meir, the first female prime minister of Israel, to tell her story on the eve of the 1973 Yom Kippur War. As she confronts the implications of power, faith, and nationalism on the global stage, she takes the audience on a journey through her personal history: from Russian immigrant to American schoolteacher, wife, mother, and, ultimately, one of the most influential people of the twentieth century. With the world on the bring of nuclear war, Meir faces challenges that cause her to investigate her role in history, while making choices that will decide the fates of nations.

The longest-running one-woman show in Broadway history, GOLDA’S BALCONY has received critical and commercial acclaim since its premiere in 2003. The New Village Arts production features Rosina Reynolds as Golda Meir, and is directed by Todd Salovey with an eye toward the theatrical and symbolic elements of the piece. Conceived and produced in conjunction with the San Diego Repertory Theatre’s 23rd Annual Lipinsky Family San Diego Jewish Arts Festival, GOLDA’S BALCONY promises to showcase an historical moment whose implications are increasingly resonant today. The play asks the question: What happens when idealism becomes power? As Golda navigates her role in world history, we are made acutely aware of how the patterns of the past shape our present.

Todd Salovey is the Associate Artistic Director of San Diego REP and the founding Artistic Director of the Lipinsky Family San Diego Jewish Arts Festival.  Recent REP directing credits include Outside Mullingar, Doubt (starring Rosina Reynolds), Steal Heaven, In the Time of the Butterflies, A Hammer a Bell and a Song to Sing and The Blessing of a Broken Heart which he also adapted, and Herbert Siguenza’s A Weekend with Pablo Picasso which he also directed at the Alley Theatre, Denver Center, Arizona Theatre Co, San Jose Stage and LATC.  In the fall he will direct his adaptation of The Dybbuk: The Dybbuk for Hannah and Sam’s Wedding starring Ron Campbell with original music by Yale Strom at SD REP.  He is also on faculty at UCSD.   Thanks to the great team at NVA!

“Seldom has history embodied itself in one person as clearly as it did in Golda Meir… Gibson gives us a great understanding of Golda’s personal and public life and conveys magnificently the fearlessness and dedication that made Golda so powerful a world leader.” – New York Daily News