Dorothy Black invites you to join her and her adult children for Christmas Eve dinner at 1222 Oceanfront. The festive evening features all of the Black family traditions including Italian food, dancing, singing and skits. The evening may also include a bit of drama, because, well it’s family. But seriously, how much drama can there be on Christmas Eve?

“I feel the entire play is a reimagined Christmas Eve where ‘Silent Night’ is a love song, ‘What Child is This’ a protest song, and the choreography for ‘Go Tell It On the Mountain’ stops just short of offending Jesus,” says playwright Dea Hurston. “It’s been an act of joy to bring Dorothy Black, her family and her home to life in this adult holiday musical and I’m thrilled to share 1222 Oceanfront with San Diego.”

“New Village Arts is incredibly proud and honored to bring this world premiere experience to North County San Diego. While looking for shows to produce over the holidays, New Village Arts realized that most holiday offerings are told from one perspective, so we decided to commission a new musical and expand the theatrical canon of holiday shows,” says Executive Artistic Director Kristianne Kurner. “In February of 2020, we commissioned four exemplary artists: Dea Hurston, Frankie Alicea-Ford, Kevin ‘Blax’ Burroughs, and Milena (Sellers) Phillips, to devise and write a musical based on their own experiences of the holidays. The team met weekly over Zoom throughout the pandemic and brought 1222 OCEANFRONT: A BLACK FAMILY CHRISTMAS to life. As we moved forward in the process, we were thrilled to bring on Joy Yvonne Jones to produce, Delicia Turner Sonnenberg to direct, and John-Mark McGaha to adapt the music and music-direct the premiere. When you add this amazing cast of actors as well, we have a true dream team of people telling this story.”

“I’m thrilled to be a part of developing a new Christmas story to add to the American theatre canon,” says Delicia Turner Sonnenberg, director. “I’m sincerely grateful that NVA is not only giving voice to the fictional Black family in the play, but also lifting the real-life voices of the Black and Latino artists who created this fun Christmas world.”

Tickets and Subscriptions: Single tickets for the 2021–22 season are $30–$59, or $27 for previews.
Discounts are available for seniors, military, and students, and for groups of ten or more.

Season Passes for all four shows are $175. Details, season passes, and tickets: www.newvillagearts.org. 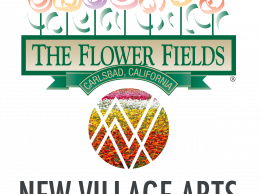 20% Off Pageant Tickets. A Gift To Fall In Love With!