TR Robertson– The latest play at NVA is an enriching, enlightening, artistically conceived glimpse into the world of one of the giants in the world of art, Pablo Picasso, in the later stages of his life. Written and starring Herbert Siguenza, the 80 minute play shows Picasso in his studio in France in 1957, as he deals with the task of completing a commission of six paintings and three vases over the course of one weekend. Siguenza uses his love of Picasso, quotes from the famous painter’s life and interviews he gave, as well as Siguenza’s personal interpretations of Picasso’s personality as he takes the audience on a personal look of the artist at work. The audience becomes art school students allowed to sit back and watch, occasionally interacting with the painter. 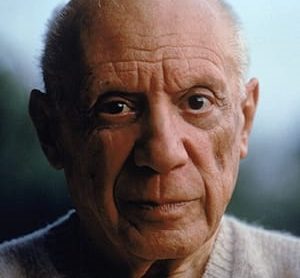 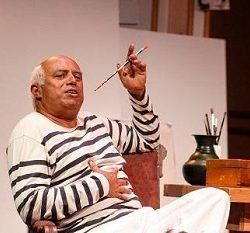 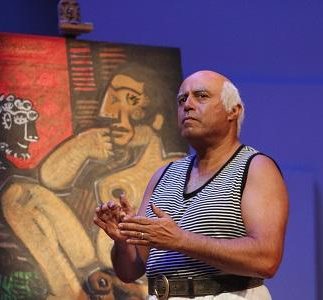 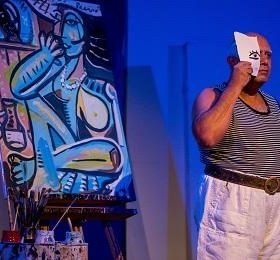 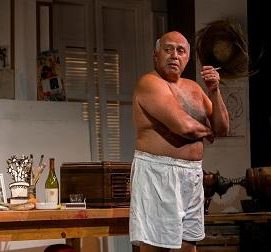 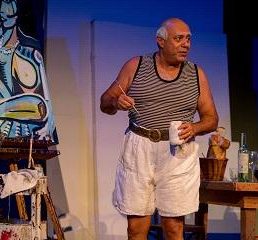 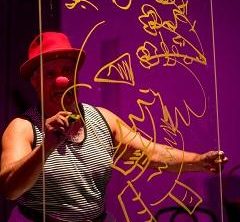 Siguenza is absolutely spell binding as Pablo Picasso. Not only does he look like the painter in his later years, but his mannerisms sweep the audience away into feeling like they are watching Picasso create before their eyes, as well as express the frustration and passion the painter was known for. He also brought out the artists more unusual and eccentric side as well. At the end of the play, Siguenza took a few moments to address the audience to thank them for attending the play, for their love of the arts and to tell the audience about his passion for this play. He stated that he feels he was “born to do this role” and that he can “honestly say this is the one for me”. He also encouraged the audience to bring young people to see the play as it deals with someone who found his calling in life and brought a passion to everything he did.

Siguenza weaves quotes from Picasso’s life into the play to try and “paint a picture” of how Picasso views art, life, war, love and a myriad of other things. Some examples – “The older you get the stronger the wind gets – and it’s always in your face”; “The world today doesn’t make sense, so why should I paint pictures that do?”; “All children are artists. The problem is how to remain an artist once he grows up.”; ‘It is your work in life that is the ultimate seduction”; “Art is a lie that makes us realize the truth”; and many more. Some quotes point to a side of Picasso many would find fault with, that being his more sexist, chauvinistic nature – “There are only two types of women – goddesses and doormats.” Picasso was married twice, had four children by three women and throughout his life maintained several mistresses in addition to his wife or the partner he was with at the time. One particular quote speaks to the passion his mother felt about what the future would hold for her son and the passion Picasso had throughout his life – “When I was a child, my mother said to me, ‘If you become a soldier, you’ll be a general.. If you become a monk, you’ll end up as the Pope.’ I became a painter and wound up as Picasso.”

Picasso’s artistic life was divided into a series of periods beginning with the Blue Period in 1901-1904, moving into the Rose Period, African Art and Primitivism, Analytic Cubism, Synthetic Cubism, Neoclassicism and Surrealism, a change in the 1930’s where the minotaur began to replace other images in his paintings (his famous “Guernica” created in 1937 depicting the bombing of the city of Guernica during the Spanish civil War), and a change in the production of art from 1939-1949 when he stayed in Paris while the Germans occupied the city. He did not exhibit any art work during this time period, as the Germans forbade his work and harassed him, but he did write over 300 poems, up until 1959. Picasso’s final years covered 1949-1979. The time period of the play is 1957 with his artistic style changing once again to producing what he felt were reinterpretations of art from the great masters Picasso admired, like Goya, Manet, Poussin and Delacroix. He also dabbled in film and helped design a huge 50 foot public sculpture in Chicago. Siguenza pointed out that Picasso was the first to use the dove, flowers and children as a motif for the Peace Movement used in the 60’s.

For the play, Siguenza, as Picasso, creates 6 paintings, most of them resembling the style most closely related to his work during his cubism and surrealism period. Director Todd Salovey and his creative team, along with the creativity of Herbert Siguenza have devised a very unique way to show Siguenza, as Picasso, painting and completing each painting. Toward the end of the play, the sixth painting is actually created, Picasso style as a matador, completely by Siguenza, and is offered for sale at the end of the show with the money being raised donated to a NVA charity.

Herbert Siguenza is currently the Playwright in Residence for the San Diego Repertory Theatre at the Lyceum. He is a founding member of the performance group Culture Clash and has both performed and acted previously at New Village Arts. Director Todd Salovey has previously directed at NVA and is the San Diego Rep’s Associate Artistic Director. His Creative Team was made up of Stage Manager Kymberli Skye, Sound Designer Bruno Louchouarn and Corrie Madden, Lighting Designer Curtis Mueller, Set/Properties/Costume Designer Giulio Cesare Perrone, Projections Designer Victoria Petrovich, and Projections Programmer Omar Ramos. “A Weekend with Pablo Picasso” is a very entertaining and cleverly designed play and will allow those attending to get a closer look into the world of one of the greatest painters of the 20th century. The play will run until August 25th and tickets are available a 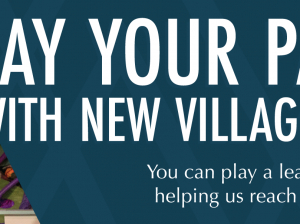