TR Robertson –It has been 17 months since Solana Beach’s North Coast Repertory Theatre has presented performances on stage in front of a live audience and the play picked to open the 40th season will bring you to your feet at the final curtain for the performances you will see on stage. Associate Artistic Director Christopher M. Williams and award-winning actress Leilani Smith will mesmerize you, educate you, make you laugh, make you sympathize and understand the message playwright Mark St. Germain is delivering in Dancing Lessons. 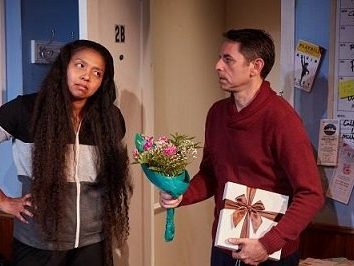 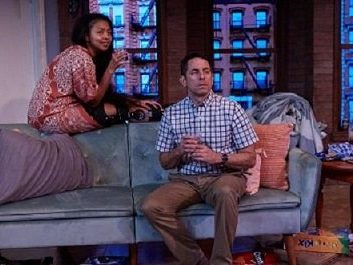 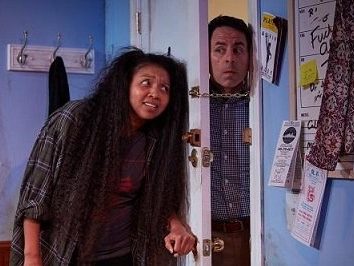 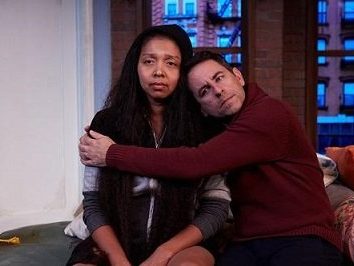 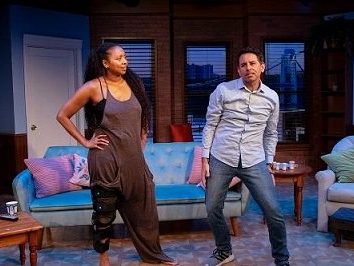 The story that unfolds on stage concerns Ever Montgomery, a brilliant Geoscientist, who is to receive an award from the National Autism Coalition. Ever has Asperger’s Syndrome, a common form of autism, and he desires help with learning how to dance at the function he is to attend. His autism includes social deficiencies and obsessive interest. He is seeking help from Senga Quinn, a former Broadway dancer who was struck by a taxi and suffered a serious injury to her leg. Senga has been told surgery to her leg is not recommended due to other complications she has that would endanger her life. As a result, she has secluded herself in her apartment, turned to pills and alcohol to pass the time and feels her dreams of returning to the stage are lost. Ever, seeking help with his own problem, but having trouble with social relationships, shows up at Senga’s door with a proposal of paying her for her “services”. His social awkwardness, obsessiveness, and tendency to be very blunt about whatever he feels leaves Senga doubting whether she will help him. Ever’s negotiation with Senga about payment is fascinating. He has come up with the amount of $2,153 for the one lesson; $1,653 for the minimum a Broadway dancer would get for a week’s work and $500 for a dance captain.

Their encounter ranges from funny to sad to unusual. To make matters even harder for Senga is the fact that Ever cannot stand to be touched, only wanting to have her teach him a fast dance. This scene in the play, as Senga tries to “walk” Ever through some fast dance moves, has the audience in “stiches”. Williams’ research of people on the autistic spectrum in dealing with social interactions helps him give a touching, emotional and amazing interpretation for this performance. He presents Ever with dignity, understanding and emotion as we watch Ever stumble through his social experiences, get frustrated as times and negotiate how to personally deal with another human.

St. Germain not only is teaching us about relationships, people with varying social interaction issues, lessons about autistic people, but in several aside scenes, he has Ever, as the professor, deliver messages about the extinction of certain animal species and a scary scenario about rising ocean levels and what might happen by 2056 with the melting of the poles. His bluntness, not insensitivity, tells us we will probably all be dead by that time anyway.

Ever’s interaction with Senga about how to do a simple handshake, a hug and a kiss is both funny and touching. Ever explains to Senga that change is difficult for him but “Change equals courage”. What he doesn’t initially realize is his struggles are also helping Senga deal with her own demons and whether she will ever be able to dance again. Her self-induced isolation is also challenged by Ever in an effort to get her to realize there could be a possible solution to her medical problems. Smith presents Senga with a wonderful tough, hard-core exterior, hiding and lying about her true emotions about her personal experiences growing up, but showing amazing patience with Ever’s unusual behaviors. When Ever finally confronts her about her family relationships, an emotional and heart-warming scene unfolds.

Dancing Lessons is an amazing and touching journey through 80 minutes of incredible performances by two veteran performers as they present the story of the growth of a relationship surrounded by tremendous obstacles. The closing emotional scene will leave you rooting for both Ever and Senga and will have you on your feet applauding at the final curtain.

COVID requirements for the theatre include showing either a vaccination card or recent COVID test. Patrons will also enjoy the newly designed snack bar and the addition of three new restrooms and a new lobby area. Masks must be worn inside the lobby and in the theatre. Dancing Lessons will be on stage at the North Coast Repertory Theatre until October 3rd. Ticket prices range from $54 – $60 and can be purchased at www.northcoastrep.org or call 858-481-1055. Next opening on stage at NC Rep will be Ben Butler by Richard Strand opening on October 20th.

NEXT ARTICLE →
WIESENTHAL: From Off-Broadway to North Coast Rep! (Don’t Miss Out!!)

← PREVIOUS ARTICLE
Thank You for a Great Summer! 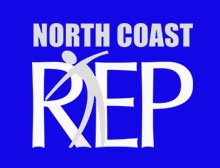 BEN BUTLER: The Critics are RAVING!!

WIESENTHAL: From Off-Broadway to North Coast Rep! (Don’t Miss Out!!)