Solana Beach, CA. – AN ILIAD is a dynamic tour-de-force adaptation of Homer’s classic poem about the Trojan War. A war-weary poet recalls the nobility, savagery and valor of the battles and warriors, while deftly exploring the human costs of war through the centuries. Award-winning actor Richard Baird vividly brings to life the power and humor of this brilliant adaptation by Lisa Peterson and Denis O’Hare. With an evocative accompaniment by Amanda Schaar, this is an enthralling, theatrical experience that is not to be missed.

AN ILIAD will stream on demand on showtix4U December 9, 2020 through January 3, 2021. Tickets are $35 and can be purchased at www.northcoastrep.org.

Viewers may also enjoy the Rep’s tandem holiday production of A CHRISTMAS CAROL  written by Zander Michaelson and is based on the classic tale by Charles Dickens. Directed by David Ellenstein and featuring James Newcomb, it will stream on demand on showtix4U December 9 through  December 31. Tickets are $35 and can be purchased at www.northcoastrep.org.

DENIS O’HARE (Co-Adaptor) is an actor and writer who lives in Fort Greene, Brooklyn. Mr. O’Hare attended Northwestern University where he studied poetry for two years under Alan Shapiro, Mary Kinzie, and Reginald Gibbons. He ultimately received a B.S. in the theatre department and pursued an acting career in Chicago while maintaining a literary salon called the “Ansuz.” In 1992, Mr. O’Hare moved to New York to continue his acting career where he appeared in numerous productions on Broadway and Off-Broadway all the while exploring creative writing in the form of plays and screenplays. He has written three screenplays, numerous poems, and one other play. Mr. O’Hare and Ms. Petersen began collaborating on An Iliad in 2006 and honed the project through multiple workshops with New York Theatre Workshop at Vassar and Dartmouth and with the Sundance Lab Institute. Denis is married to Hugo Redwood, an interior designer, with whom he has a son.

LISA PETERSON (Co-Adaptor) is a theatre director who wrote and adapted An Iliad with actor Denis O’Hare, for which they won 2012 Obie and Lucille Lortel Awards. Her other adaptations include The Waves, adapted from the novel by Virginia Woolf, with composer David Bucknam (Drama Desk nominations), the upcoming The Good Book with Denis O’Hare, and Insurance Men with composer Todd Almond. She was Resident Director at the Mark Taper Forum for ten years, and Associate Director at La Jolla Playhouse for three years before that. Her directing credits include the world premieres of Tony Kushner’s Slavs!, Donald Margulies’ Collected Stories and The Model Apartment, Naomi Wallace’ Trestle At Pope Lick Creek, Janusz Glowacki’s The Fourth Sister, John Belluso’s The Poor Itch, Beth Henley’s Ridiculous Fraud, Jose Rivera’s Sueno, Marlane Meyer’s The Chemistry Of Change, and many others. She has worked at theatres around the country including New York Theater Workshop, The Public, Playwrights Horizons, The Vineyard, Primary Stages, Manhattan Theater Club, MCC, Guthrie Theater, Seattle Rep, Berkeley Rep, Actors Theater of Louisville, Arena Stage, Yale Rep, and the McCarter Theater. Lisa won an Obie in 1991 for Caryl Churchill’s Light Shining In Buckinghamshire at NYTW, and Dramalogue, Drama Desk, and Calloway Award nominations for many other productions. She was the recipient of a TCG/NEA Career Development grant, and regularly develops new plays with the Sundance Theater Lab, New Dramatists, The Playwrights’ Center, and the O’Neill Theater Center. She is a graduate of Yale College, and a member of Ensemble Studio Theater, and the executive board of SDC.

About the North Coast Repertory Theatre: North Coast Repertory Theatre,under the artistic leadership of David Ellenstein since 2003,is a professional Equity theatre founded in 1982 by Olive and Tom Blakistone. Currently celebrating its 39th season, North Coast Rep has received critical acclaim from media and audiences alike, and has evolved into one of the area’s leading performing arts organizations. North Coast Rep prides itself on employing the majority of its actors from Actors’ Equity Association for its high quality, award-winning productions, and staging works by established and emerging playwrights. Throughout its history, North Coast Rep has created a platform where artist and audience thrive through the intimacy of live theatre, recognizing the power of theatre to challenge complacency, revitalize the imagination, nurture the unexpected, and embrace the variety and diversity in our lives.

NEXT ARTICLE →
Unveiled Starts Friday! Get Access For Only $15 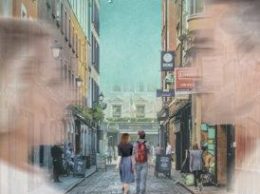 RICHARD LEDERER’S LIVING WILL: THE LEGACY OF WILLIAM SHAKESPEARE