Warning: A non-numeric value encountered in /home/customer/www/thevistapress.com/public_html/wp-content/themes/dailypress/include/breadcrumbs.php on line 54
Calendar >  “Outside Mullingar” at Scripps Ranch Theatre

“Outside Mullingar” at Scripps Ranch Theatre

TR Robertson… John Patrick Shanley stated he wanted to create a story about a family farm he was familiar with and a love story that dealt with all of the feelings surrounding this emotion. Shanley, 2005 Tony Award and Pulitzer Prize winner for “Doubt”, wrote this play “Outside Mulligar” after his 60th birthday. It appeared on Broadway in 2014 and was nominated for a Tony Award for Best Play and received two Drama Desk nominations for Best Play and Outstanding Featured Actor. He actually used the real names of his relatives for the story.

The Scripps Ranch Theatre production, under the direction of Kathy Brombacher, deals with two families going through several significant losses and changes for each family. Brombacher is the Founding Artistic Director and Producer of Moonlight Stage Productions in Vista where she also worked as the manager for 32 years. She won a San Diego Critics Circle Award for Theatrical Trailblazer and a Lifetime Achievement Award from the Vista Chamber of Commerce.The contemporary play takes place in the rural countryside of the Midlands of Ireland, just outside of Dublin. Anthony and Tony Reilly are dealing with a recent passing of Tony’s wife (Anthony’s mother), a year ago and Tony’s decisions about selling the farm or turning it over to either his son Anthony or a son who lives in the United States. Anthony has been helping take care of the farm and putting in several innovations, but is a reluctant farmer. Their neighbors are the Muldoon’s. When the play opens, Aoife Muldoon is dealing with the recent passing of her husband, and her daughter, Rosemary, is dealing with her personal feelings toward Anthony, both one of her fondness for Anthony and a grudge she still has against Anthony from an incident that occurred many, many years ago when they were very young. 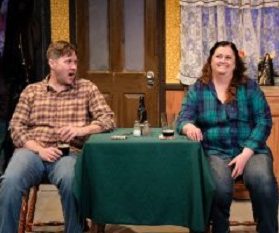 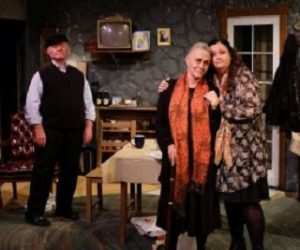 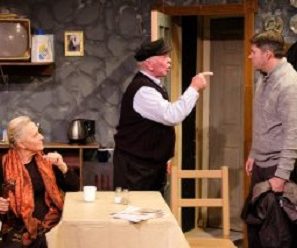 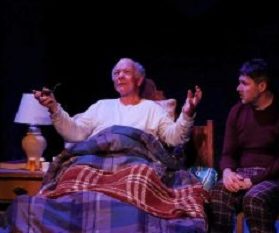 The play also deals with the conflict between a father and his son, one family with another family, a son’s decision on what the future holds for him, a middle aged man’s blindness to love, a woman’s unforgiveness for a silly, youthful incident, a woman’s holding on to dreams and hope for love that may never come true, a father and mother’s passing and how those around them deal with their loss, grudges, pettiness, superstitions, forgiveness, reconciliation and the chance that two people may find what they have been afraid to deal with before it is too late. This is a lot packed into this 90 minute play.

The four actor/actress cast Brombacher has brought together is made up of talented, veteran actors/actresses who fit their characters perfectly.  Vanessa Dinning plays Rosemary Muldoon. She was born in England, has worked throughout England and in a multitude of theatre companies in San Diego. Dinning also was the dialect coach for the other three performers, training them to use Irish accents for their characters. Playing Rosemary’s forlorn love interest, Anthony, is Stephen Schmitz. Schmitz is making his Scripps Ranch Theatre debut. He has performed throughout the United States. Playing Tony’s father, Tony, is award winning, veteran actor Jim Chovick. Chovick’s list of theatres in San Diego County he has performed covers most of the theatres in the county. Rosemary’s mother is played by veteran actress Dagmar Krause Fields, former Scripps Ranch Theatre performer. Fields list of theatres she has performed in also covers most of the county and she also teaches at Southwestern College.

Chovick brings out the cantankerous Tony’s personality in dealing with a son who seems to have gone through life lost. Schmitz shows a range of emotions in dealing with both his father and his longtime neighbor Rosemary, as he tries to decide what the future holds for him. Fields Aoife tries to be the mediator between the other three and Dinning’s Rosemary creates a driven, strong willed presentation of a woman who has had enough of the nonsense that has brought a rift between these families and her search for love.

“Outside Mullingar” will be at the Legler Benbough Theatre on the Alliant International University Campus until February 18th. Tickets can be purchased by calling 858-578-7728 or go on line to www.scrippsranchtheatre.com. Next up for Scripps Ranch Theatre will be murder-mystery-comedy by Ken Ludwig, “Baskerville: A Sherlock Holmes Mystery” beginning on March 23rd.