Warning: A non-numeric value encountered in /home/customer/www/thevistapress.com/public_html/wp-content/themes/dailypress/include/breadcrumbs.php on line 54
Calendar >  Pride By the Beach 2015

Pride By the Beach has rapidly become an Oceanside tradition that draws thousands of North County residents. Formerly known as Pride at the Beach, this year the North County Pride festival was held on October 10, one of the hottest days of the year. The celebration included live music, food vendors and local businesses. Everyone was welcome at this free family friendly event!

Oceanside Mayor Jim Wood helped kick off the event as he spoke to the crowd at the far end of the block next to Oceanside’s Civic Center. The Mayor is popular with his constituency and everyone we talked to said he was very much liked in Oceanside. Pride By the Beach organizer Max Disposti told us that the Mayor stressed the importance of the LGBTQ community to the City of Oceanside. Last week this progressive Mayor of Oceanside issued a proclamation that proclaimed October as diversity awareness month and recognized the North County LGBTQ Resource Center Pride with Pride By the Beach for the inclusive environment they have created for Oceanside and North County families.

Mayor Jim Wood graduated from Oceanside High School and Mira Costa College. Jim and his wife, Pam, have been married for almost 38 years. They have three daughters, two sons in-law, and three grandchildren. In 1971, Jim joined the Oceanside Police Department and served for more than 31 years, Mayor Wood is a true believer in open government and he encourages everyone to communicate with him personally. (http://www.ci.oceanside.ca.us/gov/council/mayor.asp)

The San Diego Sisters of Perpetual Indulgence helped with opening ceremonies conducting an explanation of the rainbow colors and a tribute to three North County youths that tragically ended their lives. Despite intense educational efforts the three youngsters had taken their own lives. The Sisters also came back onto the stage several times to entertain the crowd.

We luckily found parking curbside on the shady east end of the Civic Center. From there we cut through the Civic Center, past the memorial and the monogramed brick plaza and down stairs to where the AIDS Memorial quilt was on display in front of the Oceanside Art Museum. Exiting the Civic Center out into the street we found we were in the middle of the event. In both directions we could see canopies and dozens of colorful rainbow flags. It only took us a few minutes to locate Carolyn Bolton who led us to Max Disposti.

Max Disposti is Executive Director and Board Chair for the North County LGBTQ Resource Center, which he and Carolyn founded and opened. Their work began five years ago, when Disposti founded the North County LGBT Coalition to address the needs of their community in an area largely dominated by the military presence of Camp Pendleton. Bolton joined the team and, along with a slew of volunteers, they worked arduously to open the North County LGBTQ Resource Center in December 2011. Located in Oceanside, it is the only one of its kind serving residents north of San Diego. http://www.ncresourcecenter.org/.

The Resource Center provided a place for North County LGBTQ people thus giving the LBBTQ a voice, increasing their visibility, and improving many lives. We come together to share ideas and provide services. Some of the services include support groups for youth, seniors, and military service members, HIV/AIDS testing and prevention, counseling, civil rights advocacy, classes, and workgroups.

Their Mission Statement is: To foster and empower the North County LGBTQ community by providing a safe space, advancing awareness and visibility and sustaining equality and inclusiveness. Their Vision Statement is: We envision a community where everyone lives in equality, feeling accepted, valued, safe and free from social stigma. This well attended event, Pride by the Beach, plays an active role in the Mission and Vision of the North County LGBTQ Resource Center.

Each year the number of attendees to Pride at the Beach has steadily increased. The first Pride event had 800 attendees. By 2013, the number more than quadrupled to over 4000. In 2014, Pride By the Beach came to the streets of downtown Oceanside. That move from the parking lot at the Beach to the street next to the Oceanside Civic Center gave us more visibility, more accessibility and the number of attendees nearly doubled to approximately 6500. Unfortunately the temperature that soared into the high 90’s impacted attendance.

Every year a percentage of the money raised from Pride By the Beach goes to funding the Project Youth Program. This program presents awards to North County Gay/Straight Alliance (GSA) clubs in the middle schools and high schools. These clubs promote respect for diversity in the schools and play a critical role in stopping and preventing harassment and discrimination against LGBTQ students. This in turn helps ensure that the schools are safe for everybody. In the past few years, Pride by the Beach has provided over $16,000 in cash awards to the GSA clubs.

Project Youth is also proud to host an annual Pride Prom. This fabulous event presents a locally held Prom with dancing, games, a photo booth, food and fun! All high school age students in the LGBTQ and allied community are welcome to come to the party. They come with or without a date, and in their PG (preferred gender) attire! Pride Prom is a time for everyone to be themselves and celebrate!

Maria Al-Shamma, is the Director of Project Youth ([email protected]). Al-Shamma’s daughter Laila was named the 2013 Student Advocate of the Year by the Gay, Lesbian & Straight Education Network. The award was presented at a star-studded gala in Beverly Hills on Oct. 18 and it honors one high school student in the nation each year that has both served as a voice of change and made their campus a safer and more inclusive place.

Assembly Speaker Toni G. Atkins was a featured speaker at the 2015 Pride By the Beach. Atkins has served in the California State Assembly since 2010. She was elevated to the top leadership post in 2014, when her colleagues unanimously elected her 69th Speaker of the California Assembly. Prior to her election as Speaker, she held the position of Majority Leader and she chaired and served on numerous important committees in the Legislature. Her life of public service began in San Diego in the mid-1980s as director of clinic services at Womancare Health Center. She has also represented the City of San Diego in the local chapter of the League of California Cities and served on State Boards and Activist Groups. Atkins lives in the South Park/Golden Hill community of San Diego with her spouse Jennifer LeSar and their dogs, Haley and Joey.

Prizila Dajia Vidal also spoke at the 2015 Pride at the Beach. Prizila is an LGBTQIA, HIV/AIDS activist and advocate. She readily tells people she is a Transsexual and she has been HIV positive since December of 2005. She talked about growing up in foster care and how difficult it was as a young Latino to “come out”. She also discussed the health issues in the LGBTQ community.

At one of the many booths we found a friendly foursome. Jim, John, Bill, and George were sitting in the FOG greeting passer byes. Founded in 1993 FOG is a social activities group for older gay men. They have a variety of activities each month. FOG has a Coffee Social every Saturday, 10 A.M. at Panera Bread in Hillcrest. Non-members are encouraged to visit and socialize with us. They cordially invited me to stop by for coffee one Saturday. My charming wife of almost 50 years gave me a wink and a grin and asked, “Do you want to go?” I thanked the four gentlemen and moved towards the next booth. (http://fellowshipofoldergays.com/)

Shannon Rose was the Director for the 2015 Pride By the Beach. She is also a front desk volunteer at North County LGBTQ Resource Center. The heat notwithstanding, this was another successful Pride By the Beach that provided entertainment, information and a wealth of inclusiveness.

Oceanside Homeless Resource: Who We Are and How You Can Help 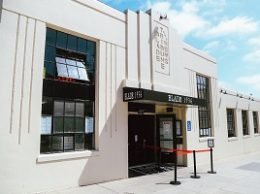