TR Robertson — It has been said writing a good comic theatrical script is perhaps the hardest of all literary forms to produce, but the collaboration of British playwrights Ray Cooney and John Chapman in the 1960’s lead to a delightfully fast paced, somewhat complicated, a tad bawdy and slapstick comedic play which intertwines the lives of four men and five women and one British flat. Scripps Ranch Theatre brings to their stage “Move Over, Mrs. Markham”, a comedy that will leave audience members exhausted with its furious place yet leaving with a smile on your face as you enjoy the complications and silly behavior of men and women falling in and out of love, all in the same apartment. 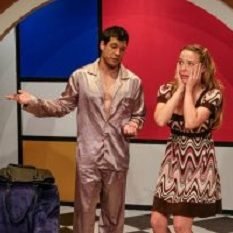 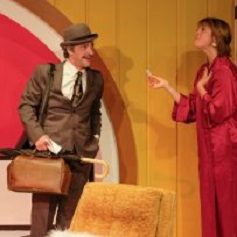 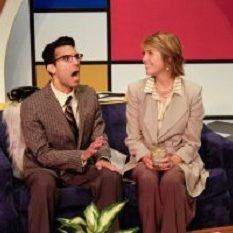 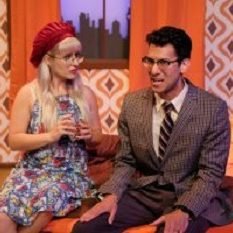 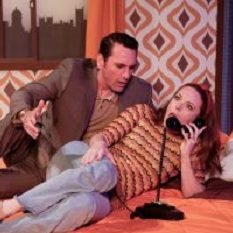 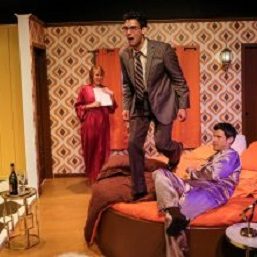 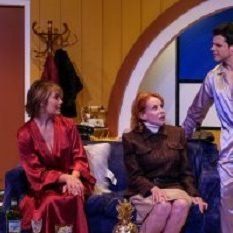 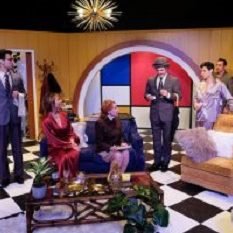 The Markham’s, Joanna and Philip, are refurbishing their London flat, using interior decorator Alistair Spenlow. Philip writes children’s books with business partner Henry Lodge. Henry wants to use their flat for a rendezvous with a phone operator, Miss Wilkinson, he met through a phone conversation. The Markham’s are going out for the evening and their flat will be available. Alistair, in the meantime, plans on using the flat for a rendezvous with the Markham’s Swedish maid, Sylvie. Henry’s wife, Linda, knows about Henry’s escapades and she plans on using the Markham’s flat to meet up with her new lover, Walter Pangbourne. As the plot and relationships thicken, the uptight Philip Markham is misled into thinking his wife, Joanna, is having an affair and one misconception leads to another and another as everyone converges on the flat for what each believes is an evening of amour. Along with this, Olive Harriet Smythe, an American children’s book author, arrives to search for a new firm to publish her books and she is lead into the romantic circus with what becomes a hilarious play on words. As everyone arrives, almost at the same time, doors slam, people jump in and out of the circular bed, people hide in closets and wherever else they can find and people assume different identities to try and seal the deal with Ms. Smythe. Follow all of this? Believe it or not, there is much more and all of it is funny.

To pull off this complicated, fast paced, carefully timed comedy, Director Francis Gercke must have a great cast and that is what he has. The cast pulled off believable British accents and handled the somewhat dated British references with ease. They are all veterans of San Diego and other major cities theatrical performance venues. Playing Johanna Markham is Leigh Ellen Akin who directed the 2019 school outreach program for SRT. Playing Philip Markham is Alex Guzman, returning to SRT. Leigh and Alex present the perfect “uppity” British couple and Alex is masterful in his portrayal of Philip when he suspects his wife is having an affair and everything is falling apart around him.

An audience favorite is Adam Daniel, playing the interior decorator Alistair Spenlow. He presents Spenlow with a flamboyant air, fooling everyone on stage into thinking he is not straight, as he lusts after the Swedish maid Sylvie, played by Colette Culbertson. Daniel is hilarious in the final scenes as he pretends to be Philip Markham to try and fool Ms. Smythe. Daniel is a graduate of SDSU and the British American Drama Academy. This is Colette’s first production with SRT.

Christopher Szabo plays Walter Pangbourne, the gentleman romantically involved with Linda Lodge. Kylie Young plays Miss Wilkinson, the horny telephone operator just looking for a good time. Both find themselves involved in a mad capped adventure in the flat and spend more time hiding than making whoopee. Scripps Ranch Theatre’s Artistic Director and a San Diego Critics Circle Award winner Jill Drexler plays the confused children’s book author Olive Harriet Smythe. She delivers, with a perfectly straight faced performance, the double entendre discussion about her doggies and gardeners as she talks with Joanna and Alistair, believing them to be the Markham couple.

This is a fun, leave your worries at the door, have a good laugh musical. Even though the language uses occasional British terminology, you will have no trouble figuring out what the cast is talking about. It is a hilarious, slap-stick romp with just enough silliness to make the evening enjoyable.

“Move Over, Mrs. Markham” will be on the Scripps Ranch Theatre Stage in the Legler Benbough Theatre on the Alliant International University campus until June 30th. Tickets are available at 858-578-7728 or go to www.scrippsranchtheatre.org.

NEXT ARTICLE →
A New Look for a Campy, Classic Musical at New Village Arts