TR Robertson–  A packed opening night crowd enjoyed the “Motown-like” sounds and the energetic performances of 24 talented actors and actresses, as they brought to the Horton Grand Theatre Stage the funny and uniquely saintly musical “Sister Act”. The musical, premiering in 2006 at the Pasadena Playhouse, is taken from a book by Bill and Cheri Steinkellner, with music by Alan Menken and lyrics by Glenn Slater. The musical did not appear on Broadway until 2011 when it opened at the Broadway Theatre. It would be made into a Golden Globe nominated movie in 1992, starring Whoopi Goldberg. 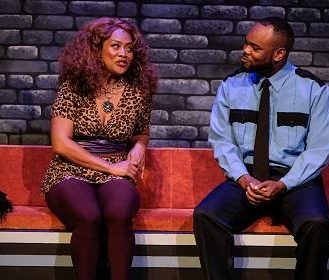 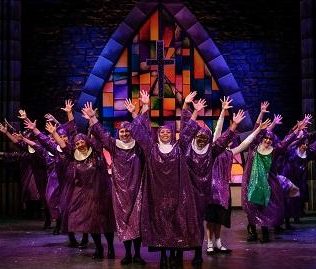 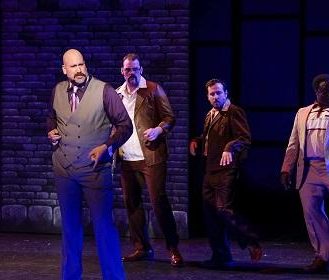 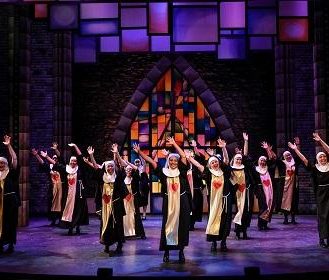 The musical is a simple story of love, friendship, commitment and a willingness to make the right choices in life. Set in 1977-78, the musical centers around a wanta-be lounge singer, named Deloris Van Cartier, who is involved with a two-bit criminal, Curtis. Deloris thinks Curtis is the answer to her desire to become a famous diva. She stumbles on Curtis committing a murder, rushes to the police to tell them the story of what she has seen and is quickly put into a witness protection program. The program the police choose is to hide Deloris in a local Catholic Church, Queen of Angels, as a nun. Deloris finds she has to hide in the church for a year. She is a little skeptical at first, but soon discovers the nuns need help with their choir. As it turns out, Deloris, now known as Sister Mary Clarence, begins to love what she is doing, even though it is not looked on favorably by the Mother Superior. The nuns of Queen of Angels at first aren’t sure about Deloris’s style, but as time goes on, they begin to love being known as the “nuns shaking their buns”. The nun’s exuberant style begins to pack the money strapped church and plans to sell the church stop; but notoriety comes at a price. Television stations film the nun’s performances, especially when it is announced they will be performing for Pope Paul VI. Curtis and his goofy cohorts see them on T.V. and Curtis sets out a plan to kill Deloris. With help from a police officer who has known Deloris since high school, Sweaty Eddie, and the nuns, Deloris is able to help stop Curtis, find love, help the nuns put on a great show and help one particular nun find her real inner self.

Miriam Dance plays lounge singer turned nun Deloris Van Cartier. Miriam is making her San Diego Musical Theatre debut. She has a booming voice with great stage presence and is a perfect cast as a struggling lounge singer turned enthusiastic nun. She “rocks the theatre” in the songs “Take Me to Heaven”, “Fabulous Baby”, “Bless Our Show” and “Sister Act”. The strict, traditional Mother Superior is played by Sandy Campbell, also making her debut with SDMT. Sandy is a multiple Craig Noel Award winner and a Resident Artist at Cygnet Theatre. Sandy portrays the staunch Mother Superior and standouts out as she sings “Here Within These Walls” with Deloris and the moving “I Haven’t Got a Prayer”.

Playing the tow-bit criminal leader, Curtis, is Berto Fernandez. Berto presents Curtis as a hood you can’t help but like as his large and mean presence on stage is surrounded by a goofy set of cohorts that can’t possibly succeed in what they are setting out to do. Berto is also new to the SDMT stage. The criminal master-minds are Donny Gersonde as Joey, Gerardo Flores Tonella as Pablo and E.Y Washington as TJ. Joey thinks he is a sexy lady’s man, Pablo has trouble getting anyone to understand him and TJ is off-the-wall goofy. Gerardo is new to SDMT and E.Y. and Donny have been in other SDMT productions. Together, these three perform a hilarious number “Lady in the Long Black Dress”. Jeremy Whatley plays Deloris’s love interest. Jeremy is also new to the SDMT stage. He sings the “I could be That Guy”, as he wishes he could be the person in Deloris’s life and performs a multiple wardrobe change along the way. Monsignor O’Hara is played by veteran actor Jim Chovick, who also goes through a series of colorful costume changes during the evening.

The large cast of nuns for the musical perform a number of cleverly choreographed routines to a number of songs throughout the musical and wows the audience with an array of colorful habit changes. Each one has a specific unique characteristic, some standing out a little more than the others. Sister Mary Lazarus, played by Susan Stuber, is the oldest nun who finds a new step in her giddy-up. Sister Mary Patrick, played by Bethany Slomka, an audience favorite, is the most energetic and excitable of the nuns, and young Sister Mary Robert, played by Sarah Errington, is a timid soul who goes through the biggest change brought on by Deloris’s appearance with the nuns. Sarah’s solo, “The Life I Never Led”, is a powerful song about what Mary Robert feels she has never been allowed to take part in throughout her life, and Sarah received the loudest round of applause from the evening’s performance.

“Sister Act” is a fast paced, inspirational, very funny musical perfect for the entire family. “Sister Act” will play at Horton Grand until May 26th. The Horton Grand Theatre is located at 444 Fourth Ave in San Diego. Tickets can be purchased at 858-560-5740 or at www.sdmmt.org. Up next for SDMT will be “All Shook Up” beginning on August 2nd.