Warning: A non-numeric value encountered in /home/customer/www/thevistapress.com/public_html/wp-content/themes/dailypress/include/breadcrumbs.php on line 54
Calendar >  This Day in History – Washington Takes Command of Continental Army

This Day in History – Washington Takes Command of Continental Army

July 3, 1775…George Washington rides out in front of the American troops gathered at Cambridge common in Massachusetts and draws his sword, formally taking command of the Continental Army. Washington, a prominent Virginia planter and veteran of the French and Indian War, had been appointed commander in chief by the Continental Congress two weeks before. In agreeing to serve the American colonies in their war for independence, he declined to accept payment for his services beyond reimbursement of future expenses.

George Washington was born in 1732 to a farm family in Westmoreland County, Virginia. His first direct military experience came as a lieutenant colonel in the Virginia colonial militia in 1754, when he led a small expedition against the French in the Ohio River Valley on behalf of the governor of Virginia, beginning a fight that resulted in disastrous defeat for first Washington and then British General Edward Braddock. This launched the Seven Years War, but Washington resigned from his military post and returned to a planter’s life in Virginia, later taking a seat in Virginia’s House of Burgesses. During the next two decades, Washington openly opposed escalating British taxation and repression of the American colonies. In 1774, he represented Virginia at the Continental Congress.

After the American Revolution erupted in 1775, Washington was nominated to be commander in chief of the newly established Continental Army. Some in the Continental Congress opposed his appointment, thinking other candidates were better equipped for the post, but he was ultimately chosen because, as a Virginian, his leadership helped bind the southern colonies more closely to the rebellion in New England. Despite his inexperienced and poorly equipped army of civilian soldiers, General Washington led an effective war of harassment against British forces in America, while encouraging the intervention of the French into the conflict on behalf of the colonists. On October 19, 1781, with the surrender of British General Charles Lord Cornwallis at Yorktown, Virginia, General Washington defeated one of the most powerful nations on earth.

After the war, the victorious general retired to his estate at Mount Vernon, but, in 1787, he heeded his nation’s call and agreed to preside over the Constitutional Convention in Philadelphia, Pennsylvania. The drafters created the office of president with him in mind, and, in February 1789, Washington was unanimously elected the first president of the United States. As president, Washington sought to unite the nation and protect the interests of the new republic at home and abroad. Of his presidency, he said, “I walk on untrodden ground. There is scarcely any part of my conduct which may not hereafter be drawn in precedent.” He successfully implemented executive authority, making good use of brilliant politicians such as Alexander Hamilton and Thomas Jefferson in his cabinet, and quieted fears of presidential tyranny. In 1792, he was unanimously reelected but, four years later, refused a third term. He died in 1799.

NEXT ARTICLE →
This Day in History – Chevrolet Builds 1 Millionth Corvette 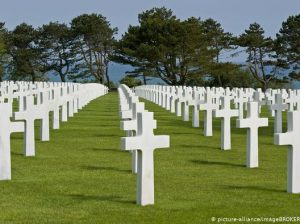 Beneath The Wooden Cross – Thomas Calabrese