TR Robertson — There is nothing like a good night’s sleep after a long plane ride, even if the beds are hard, to invigorate you for the beginning of a vacation tour, especially a food & wine tour of Sicily and Italy. Day 3 of our trip to Sicily and Southern Italy started out with a visit to the town of Noto, known for the beautiful Sicilian baroque architecture throughout the town. Noto has been designated as a UNESCO World Heritage site. The town suffered a devastating earthquake in 1693 which resulted in the death of over 60,000 people. The town slowly rebuilt and at one time had over 40 magnificent churches, the most impressive being the Noto Cathedral, along with a Royal Gate, built in 1841, at the entrance to the town and an authentically restored 18th century Sicilian palace, Palazzo Castelluccio. Noto is also known for their pastry shops, almonds and sun dried tomatoes.

After several hours in the town, we left Noto on our tour bus and headed to our first winery for the tour, Zisola, started by the Mazzei family in 2003. This winery is famous for their Nero d’Avola grapes in the making of their red wines. The winery makes 4 red wines and 1 white wine. The grapes grow on small trees rather than vines. Each of the vine plants produces one bottle of wine in the processing. The irrigation system for the vineyard is underground and the winery uses no pesticides. The winery produces around 150,000 bottles a year. Each of the bottles of wine has a 13-15% alcohol content. After sampling four of the wines and eating a light lunch of meats and cheeses we boarded our bus for a ride into the country side for a trip to Azienda Casabianca, the home of an Italian Contessa, who we simply referred to as Contessa. The large older farm house also had a sizable former stable area connected to the farm house. The Contessa and her helpers had set-up a series of tables and chairs and were providing us with a typical Sicilian meal, consisting of appetizers of bruschetta, baked eggplant, a first course of a multiple of pasta flavors, a second course of potatoes, sausage, bell peppers, meatballs and salad and gelato and fruit for dessert. And, of course, wine and more wine. A delicious way to end our first full day in Sicily. 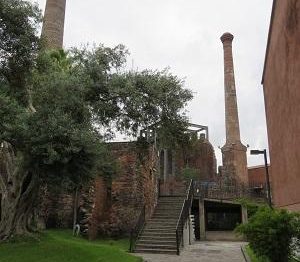 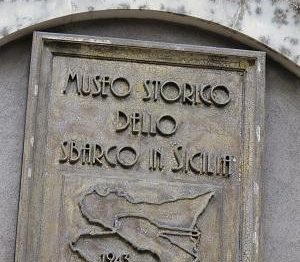 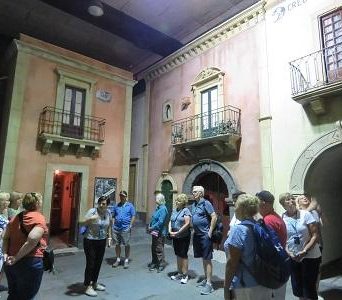 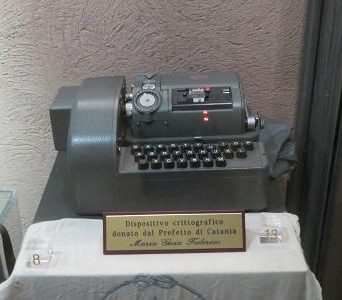 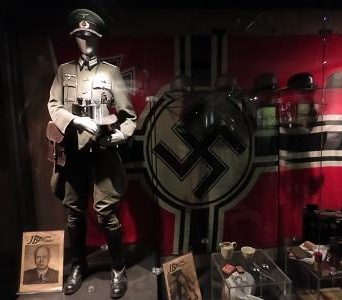 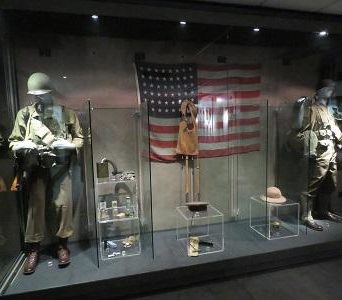 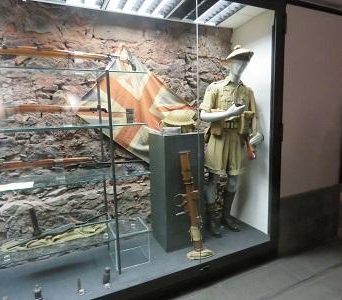 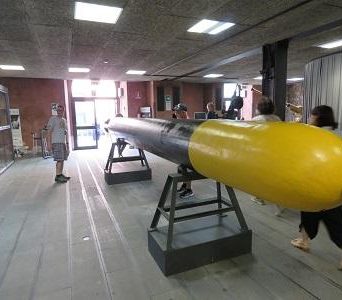 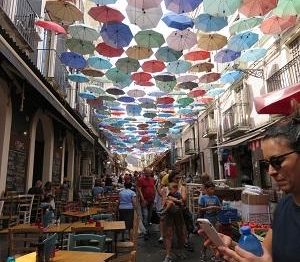 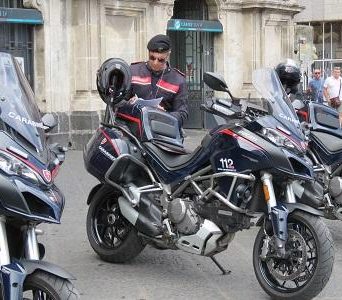 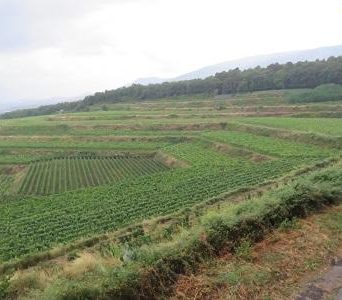 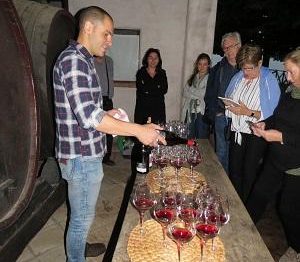 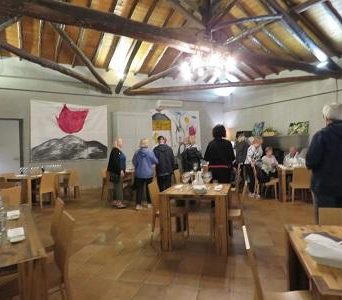 The Day 4 in Sicily began with breakfast in the hotel, boarding our bus and a short ride through Catania to visit the Museo Storico dello Sharco, a World War II museum focusing on the Allied invasion of Sicily. The invasion of Sicily, beginning on July 9, 1943, was a prelude to the D-Day invasion of Normandy, France. The success of the Sicily invasion would lead to the success of the D-Day invasion. The museum had a series of large inter-active walk thru dioramas starting with a recreation of some of the store fronts of a small Sicilian town from the 1940’s. You heard the air raid sirens as you moved to a bomb shelter then heard the planes and bombs dropping. Next was a recreation of the town having been bombed. The museum had a large collection of newspapers and memorabilia from the war, a collection of Allied and Axis uniforms and weapons, many maps showing the invasion leading to the eventual invasion of mainland Italy. 400,000 Allied troops led the invasion arriving in 22 convoys. The invasion was called Operation Husky and was successful due to Operation Mincemeat. Operation Mincemeat was designed to fool the Nazis and Mussolini into believing the Allied forces would be invading Greece and southern Spain, not Sicily. The British took a deceased tramps body, dressed him as a British officer, placed invasion plans on the body and placed the body in the Mediterranean so it would wash up on shore in Italy. Unbelievably, the plan worked and the Axis forces had no idea Sicily would be the launch point for an invasion of Italy. It took only 39 days to conquer Sicily and then invade Italy at Salerno. The museum was an amazing history lesson of a time when all of world was at war and the whole world was fighting to remain free.

Back in Catania we took a walking tour to city center and a short walk thru the local fish and meat market. We also got our first glimpse of the Carbinari, military police assigned to detect and protect the tourist’s areas and locals from terrorist attacks. With the afternoon off we grabbed lunch, did a bit of shopping and returned to the hotel to prepare for an evening trip to the Barone Di VillaGrande Asmundo family winery, located on the slopes of the volcano Mt. Etna, established in 1727. This vineyard is one of 289 wineries located on the slopes of Mt. Etna. The drive up the slopes of Mt. Etna was beautiful with terraces of vineyards located everywhere there was open space. The winery we visited is one of the oldest in Sicily, 292 years old. The volcanic soil, sea breeze and rainy climate of Mt. Etna makes a different group of grapes grow. This area gets over 80 inches of rain a year. This winery bottles over 85,000 bottles a year. My favorite wine here was Etna Rosato. We had a great dinner with a different wine served with each course, a thunderstorm rolled in complete with lightning and a momentary romantic power outage. Another memorable evening as we could see the red glow of Mt. Etna as we boarded the bus to go back to the hotel.

Day 5 was our final day in Sicily. We boarded our bus, this time with a new driver named Mimmo. Our destination was the port city of Messina and a quick ferry ride to the mainland of Italy. Messina is home to a Jesuit university built in the 1600’s and a destination for many of the cruise ships arriving to Sicily. As we drove down the coast to Messina our tour guide, Linda, pointed out that Sicily was the land where legend has it Ulysses and his men outwitted the Cyclops, Polyphemus. We also passed by an area where, a bit further up in the mountains above Puerto Salvo Roccalumera, Francis Ford Coppala filmed one of the scenes of “The Godfather” where Michael hides out after avenging the attack on his father, Vito, and where his marriage took place to a Sicilian woman, Apollonia. We were also told another massive earthquake, in 1908, inflicted severe damage in Messina killing between 75-85,000 individuals. The clock in the central square plays “Ava Maria” every day at noon. Messina is the closest port to mainland Italy where there is still an ongoing battle about building a bridge to connect Sicily to Italy. Our ferry ride would cover 1.8 miles and take 20 minutes where we would take a short drive to Reggio Calabria to visit a museum holding an incredible find from the time of the ancient Greeks.

Part III will cover the beginning of our visit to various cities in Southern Italy, a beautiful spa resort in the hills of Italy, a new group of wineries and new sites along the way including a classic Italian hill town, and an ancient town once covered by over 40 feet of lava mud.