TR Robertson- – After an eye opening visit to Sicily, Day 5 found our group boarding a bus, heading to the city of Messina, loading onto a ferry and taking a quick 20 minute trip across the Straits of Messina to Reggio Calabria. Our first destination for this day was to see the incredible Riace Bronze Greek statues in the Museum of National Archaeology of Reggio Calabria. As we drove along the coast we had entered the 2nd of 20 regions that makes up Italy. Sicily is the largest region. The area we were driving thru is famous for some of the largest groves of olive trees in Italy and for Bergamont orange trees that produce the Bergamont oil used in perfumes and essential oils. There is an estimated 60 million olive trees in this area. 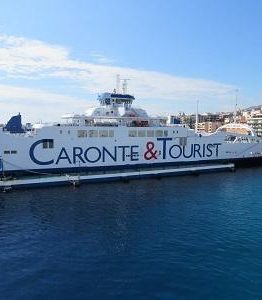 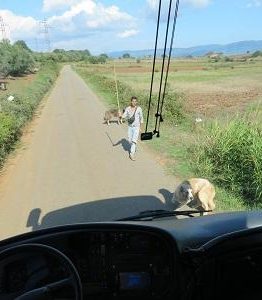 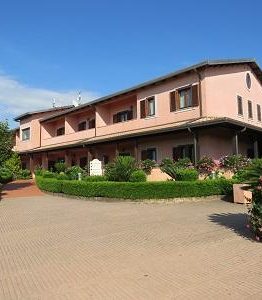 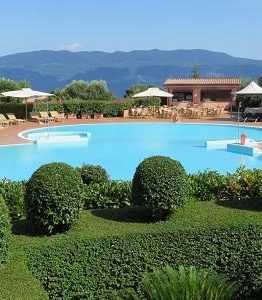 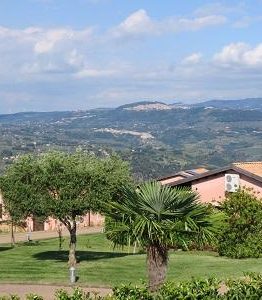 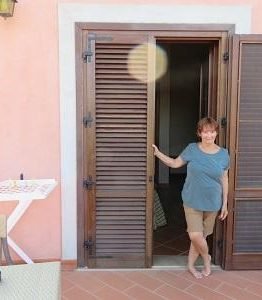 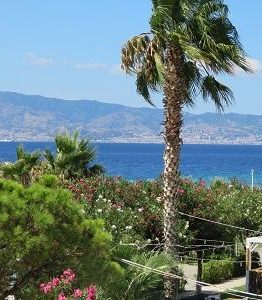 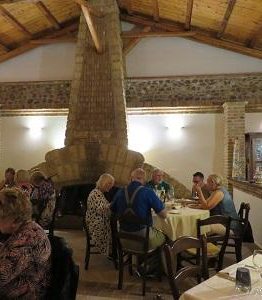 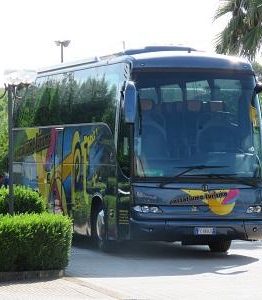 Arriving in Calabria, we were escorted to the entrance of the museum and informed that as we entered the area where the large bronze statues were displayed we would first have to enter a “purification” room where would be momentarily held while the air was filtered. The “Bronzies” were discovered on a beach in 1972, completely buried in the sand and water along the shore line, with one of them barely visible. It is thought the statues were on board a Greek vessel that sunk sometime between 500-400 B.C. The large bronze statues have been designated Warrior A & B. In the display room, each group was given 20 minutes to see, take pictures and admire these amazing pieces of art. In the area where the statues was excavated numerous other items were discovered, which are on display in the museum as well. Two bronze heads, called the philosophers heads, are also on display in the room where the “Bronzies” are displayed. We were then given some time to walk thru the museum’s other displays and to grab a bite to eat.

Boarding the bus the group headed to our hotel, Popilia Country Resort, located in the hills above the coastal cities of Tropea and Pizzo. As we drove along the coast, called the Coastline of the Gods, in the distance, off of the coast, the volcanic island of Stromboli was pointed out. Stromboli has minor eruptions every 20 minutes. The bus drove thru a number of long tunnels constructed thru the hills. We drove by several cemeteries made up of above ground family mausoleums, the deceased buried in the mausoleums underground. We also passed farmland where tomatoes were grown for the sun dried tomato production this area is known for. It was also pointed out that the area grows cipolla rossa, the sweet red onions and red hot chili peppers. We would see a lot of these foods hanging in various shops in the coastal towns of Tropea and Pizzo. This area is also famous for the production of Nduga spreadable spicy salami. We would be visiting a shop, the next day, in Tropea for a sampling of these foods as well as the delicious pecorino sheep’s cheese.

Winding up a hill above the coastline we came upon a shepherd tending to his flock with 6 sheep dogs. Slowly making our way by the sheep, the bus arrived at the beautiful Popilia Country Resort. The large resort had an impressive swimming pool, a cardio-fitness room, a large restaurant, a spa & wellness center and our rooms were separate bungalow cottages, each unit divided into three rooms. The two day stay would be a welcomed change from the hustle and bustle of the Italian cities. 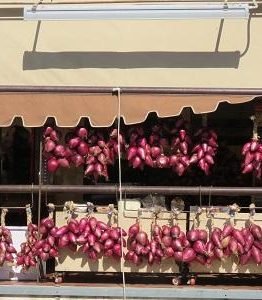 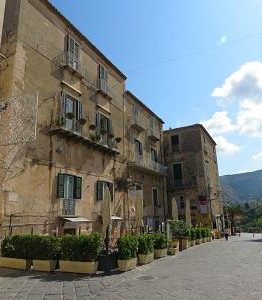 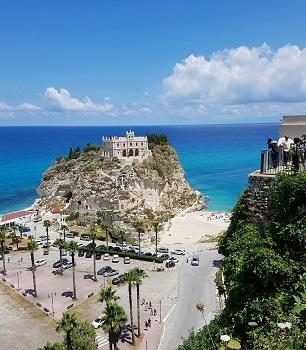 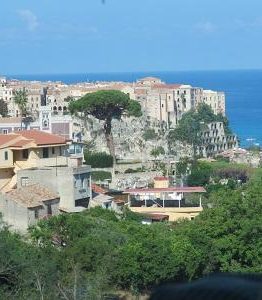 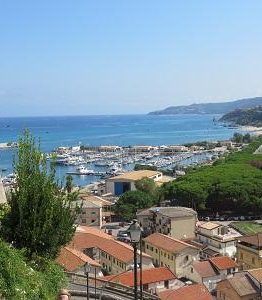 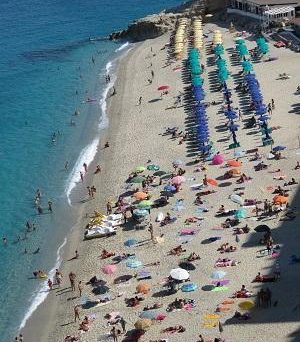 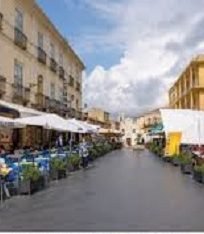 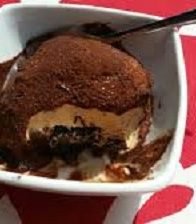 Day 6 found us taking a visit to the small coastal towns of Tropea and Pizzo. In Tropea we walked to several overlooks, one looking down on the Santa Maria dell’Isola monastery. The monastery sits on a large hill jutting out from the coast. The group was escorted to a shop for a sampling of many of the food items made in this part of Italy. Cheeses, salamis, spreads made from the red onions and other samplings were placed on plates for us to enjoy. We were given a period of time to wander the central area of Tropea and since it was lunchtime a group of us decided to sample a red onion pizza and we would not be disappointed. Those that chose to shop found that very few of the shops selling souvenir items were set-up to take credit cards. Another travel lesson, it is best to have money from the country when shopping in the smaller cities.

After a short time in Tropea, we hiked back up the slanted streets to our bus for a short ride to the city next to Tropea, Pizzo. We were stopping in the small city of Pizzo, which overlooks the Gulf of Euphemia. We walked to the Plazza Della Repubblica and were told to find a café and order the Tartufo Moro, black truffle gelato. We would again not be disappointed, it was a delicious and a great way to top our visit to Pizzo. It should be noted that when you need a restroom in any of the shops in these towns you will probably have to pay anywhere from .50 to 1 Euro and none of the toilets will have toilet seats. No one could figure out why the shop owners did not have a seat added to the toilets.

Day 7 our group boarded the bus to leave the Country Resort and head toward “The Subterranean City” of Matera. This ancient city walls date back to the 13th century, but humans have lived in the surrounding caves as far back at 10,000 years ago. The city was all but forgotten about until the 1980’s when the city was declared a UNESCO site and an interest grew into developing the city as a major tourist site. Starting in 1986 people were allowed to move back to ancient Matera if they agreed to renovate the cave homes and other structures in the city. There is a large section of the town once controlled by the Romans. Many of the caves were lived in up until 1958. On our drive to Matera our guide told us a little about the Ndrangheta, the Mafia of Southern Italy. This loosely constructed group controls many of the local businesses including construction and sanitation. We did notice a great deal of trash piled along the roadways and many partially constructed buildings sitting abandoned. Along the Ionian Coast we stopped for a quick photo stop of one of the many castles built by Frederick II in the 13th century, Castello Federicano Di Roseto Capospulico. We also passed close to the ancient Greek town Francis Ford Coppala helped reconstruct, Bernalda, and the Temple of Hera he helped save and the Five Star Hotel Palazzo Marcherita he constructed. We were also not far from the unusual fairy city of Alberobello and the port of Bari where we once caught an overnight ferry to Greece. 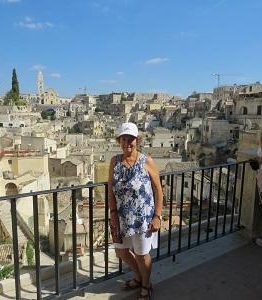 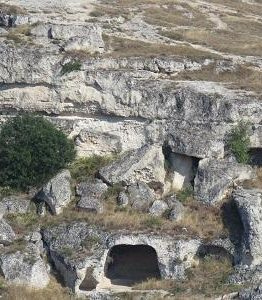 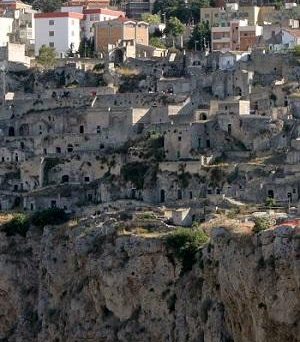 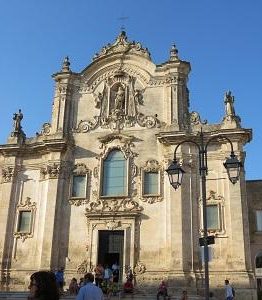 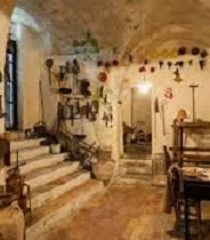 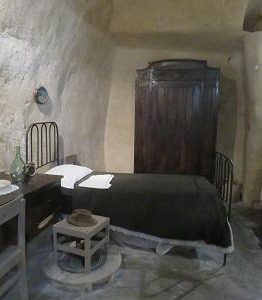 Arriving in Matera, we checked into our hotel, Albergo Atalia. As we made our way to the hotel we noticed there were a number of stages being assembled and we found out that the weekend we arrived there was a music festival being held in the main plaza area of Matera. Matera is also referred to as the European Capitol of Culture. This ancient city is carved out the stone on the hills of this area and the streets wind up and down the sides of the hills. Wandering down the streets to an overlook, we took in the immensity of the stone constructions in this city and in the distance saw numerous caves that were once inhabited by people long ago.  The next day, a city guide took us on a more extensive tour passing by the Palazzo del Sedile (formerly a Palace), Casa Grotta di Vico Solitario (cave home) and Chieve Rupestri (rock church). We passed by an area recently used for the new James Bond movie in a motorcycle chase scene. Thirty-eight movies have been filmed in Matera, including Mel Gibson’s “Passion of the Christ”. The cave home we saw was made up of a multitude of rooms with furnishings to show visitors what a typical home of this type would have looked like. There was even a room for animals like donkeys. Many of the cave homes have become wine cellars and olive mills. Our hotel room had a great view of the ancient caves across the valley. Close to our hotel was a very fascinating museum showing a sample of Trash People, large artistic depictions of humans made completely of bits and pieces of trash of every kind. Hundreds of these art pieces are made and have appeared everywhere imaginable as statements of the waste in our society. They have appeared on The Great Wall of China, in front of the Pyramid of Giza, in the Vatican Square, in Matera and many more locations. This is an active, vibrant ancient city with amazing structures from the past mixed with wonderful restaurants and hotels, surrounded by an even larger modern city. For dinner we boarded our bus for an excursion to the Primitivo Winery, which started bottling in 2008 and now is bottling over 800,000 bottles a year. We had a great selection of red, white and rose wines to go along with another unique dinner featuring dishes like pasta with pistachio sauce and pork with plum sauce. The breads served with the meal were called ancient grain bread.

After 2 days in Matera, Day 9-12 found us back on the bus again, this time headed to Benevento, lunch and cooking lessons at a Michelin-starred restaurant, a visit to an incredible chocolate factory, a co-op Winery for lunch, walking in a medieval city called Guardia Sanframondi, a hotel in the southern-most city of the Amalfi coast, lunch at a Mozzarella Farm and a walk in the past at the Greek and Roman ruins of Paestum. More on these sites in Part IV.