Warning: A non-numeric value encountered in /home/customer/www/thevistapress.com/public_html/wp-content/themes/dailypress/include/breadcrumbs.php on line 54
Calendar >  Welk Theatre Offers a Musical Step Back in Time Every Wednesday Evening

TR Robertson….Every Wednesday evening thru June, the Welk Resort Theatre will present a 2 hour trip back in time to the beginning of contemporary artist Neil Diamond’s career up to the 1980 release of the movie “The Jazz Singer”, starring Neil Diamond. “I AM…Neil Diamond, I SAID” is billed as a first ever, original musical about the early life of Neil Diamond, written and produced by Jason Lohrke. Lohrke becomes the early Neil Diamond on stage, taking the audience back in time to the early beginnings of Neil Diamond’s interest in music, stories from his childhood, teen and early adult years. Using the music of Neil Diamond, Lohrke shows the development of Diamond as a performer, recounting his struggles with being in front of audiences, developing his musical style in Brooklyn and Tin Pan Alley in New York City.  Along with an energetic six piece band, Lohrke sings the legendary songs Diamond wrote along with some lesser known songs that played a part in the development of Diamond’s career.

Neil Diamond’s career began in the 1960’s and he is still performing sold out concerts today. Diamond has sold over 120 million records, produced 50 albums, with 11 #1 singles. He is in the Songwriters Hall of Fame, in the Rock and Roll Hall of Fame, on the Hollywood Walk of Fame, has had 9 Grammy nominations and the 1974 “Jonathan Livingston Seagull” movie won a Grammy for Best Score Soundtrack. He has also been nominated for 3 Golden Globe Awards. 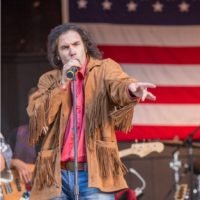 Jason Lohrke’s interest and love of Neil Diamond’s work began long ago. His mother used to play Diamond’s records for him. Lohrke began a band at age 13, loved performing for people and doing impressions.  He said he has always been a fan of Neil Diamond and even plays his 1972 “Hot August Night” duel album over and over on his phone. He collects his vinyl albums, both rare and standard and attends his concerts when he can. Lohrke recently was the winner of 2 tickets to Diamond’s 50th Anniversary Tour Concert at The Forum in Los Angeles on August 10th. He was the lucky 20th caller in a contest sponsored by the radio station 103.5 KOST FM. 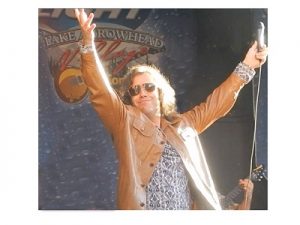 The current musical, performed at the Welk, began some three years ago and has gone through development ever since. The first concert was at a benefit for a local food bank at Mercy Warehouse, an organization that assists over 400 families a month in south Orange County. Mercy Warehouse is part of Vineyard Community Church in Laguna Niguel. Lohrke grew up in the Orange County area with short stops in San Diego and Portland. With help from friends who filmed the concert, calls began to come in and the stage show was off and running. Jason is performing about 2 to 3 times a week, at times as a solo artist with his acoustic guitar. The Welk show features a 6 piece band plus Lohrke on guitar. The band plays at numerous festivals, theatres and other events and is looking to expand to other locations in the United States and possibly into Latin America and Europe. He said Las Vegas of Atlantic City is a strong possibility as well. The background information about Neil Diamond used in the show was obtained by Lohrke through extensive research into interviews, articles, documentaries, biographical books and speaking with people who have worked with Neil Diamond.

Lohrke said the current show goes through changes with the addition and deletion of different numbers from the Neil Diamond repertoire. He said it could easily be a three hour show because there is so much to choose from in Neil Diamond’s career. For the show I covered, the 2 hour musical began with “Shiloh” followed by “Brooklyn Road”. There is no question that Jason Lohrke’s voice sounds very similar to the young Neil Diamond and he includes many of the Diamond mannerisms and arm movements during and at the end of the songs. At this point, the audience begins to hear stories of how he (Diamond) started in music, his family life, and his interest in learning how to play the guitar. We learn that Diamond and a friend (Jack) started a duet that would be short lived. We even heard part of the first song Diamond wrote for a young girl in high school, who would become his first wife. Diamond would become a song writer long before he would become famous for his concert performances. One of his songs was first performed by Pat Boone. Lohrke, as Diamond, tells the story of his struggles with record labels like Roosevelt Music and Bank Records. A scholarship to New York University in fencing, a possible bio-med pre-med interest was passed on as Diamond wanted to write and perform. “Solitary Man” would be one of his big breaks and in 1966 a performance of “Cherry Cherry” on American Bandstand would put him into the mainstream of the music scene. Even with this, Diamond was still known as a song writer as shown by one of his songs, “I’m a Believer” being recorded by The Monkees. Diamond’s mother felt he was married to his music and Diamond hit a rough patch in his life with a failed first marriage, leaving his record company and a failed first album. In need of a hit, trips into the South and the influence of evangelical churches and gospel choirs would lead to the hit song “Brother Love’s Traveling Salvation Show” and a #22 on the hit charts. Songs like “Sweet Caroline” would follow, now a theme song used by the Boston Red Sox. Sweet Carolina was supposedly written for his second wife, Marcia, but had to get her permission to change the song name to Caroline as he couldn’t find a three syllable word to rhyme with Marcia.  1969 would bring a second marriage, Marcia Murphy, and an influence of the sounds of African music. In Los Angeles, Diamond would spend 4 months in a recording studio and what is considered by many one of his best songs and an auto-biographical song, “I Am, I Said”. Performances at the Greek Theatre and the successful “Hot August Nights” double album followed and in 1972 another #1 song, “Song Sung Blue”.  In 1974, Diamond would write all of the music for the movie “Jonathan Livingston Seagull”, which would win a Grammy for Best Score Sound Track. All of this would lead up to the remake of the 1920’s movie which stared Al Jolson, “The Jazz Singer”. Diamond wrote the music for the movie, which would be nominated for several Golden Globe Awards. Diamond felt the story of a young man striving to do the best and be the best he could and never giving up was the story of his life. The final song to the musical concert, is dedicated to Diamond’s grandparents, “Coming to America”. 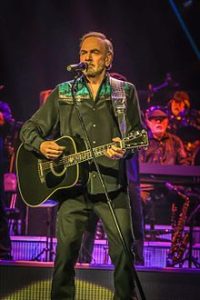 The real Neil Diamond at a recent concert.

It is these stories and much, much more that makes this musical concert a most unusual, entertaining and high energy event. Band members Evelyn Mendoza – vocals, John MacElwee – percussion & drums, Dan Lipsey – lead guitar, Terry Moran – bass guitar, Paul Goldin – Lead guitar & Synth guitar and Jeff Mercer – keyboard and vocals provided a dynamic back-up for Lohrke as he guides the audience through Diamond’s early life and development. He said the band is like family to him and help him in the creation of the musical story of Diamond. Lohrke also said his wife, kids, parents have helped along the way as well as Jon-Paul Boyadjian, who developed his web site.  This is a chance for audience members to not only hear great music performed in a moving tradition to one of our nation’s greatest entertainers, but it is a chance to learn a lot about the singer that you may have not known, getting an even deeper and better insight to the singer and how he developed. Lohrke said it is an honor to sing and pretend to be The Living Legend responsible for 5 decades of music and he hopes one day to meet him up close and personal. He has heard that Neil Diamond wants to do a musical about his life using is songs. Jason also wanted to thank the Welk Resort and Joshua Carr for providing the opportunity for this 40 show series of Wednesday performances.  This show is well worth a Wednesday evening trip to the Welk Resort.

Tickets for “I AM…Neil Diamond, I SAID” are available at 1-888-802-7469 or go to http://welkresorts.com/san-diego-theatre/ . To check out more information about Jason Lohrke and the Neil Diamond show go to www.NeildiamondExperience.com . Enjoy a great meal at the Canyon Grill followed by a Wednesday evening you will remember for a long time

Favorite Foods of the U.S. Presidents of the United States