Warning: A non-numeric value encountered in /home/customer/www/thevistapress.com/public_html/wp-content/themes/dailypress/include/breadcrumbs.php on line 54
Calendar >  2022 Pageant Of The Masters Celebrates Travel And Culture In “Wonderful World”

Pageant of the Masters re-creation of “Round the World” Game Box Cover (1890) featuring adventurer Nellie Bly, one of the inspirations for “Wonderful World”

Laguna Beach, CA — The Pageant of the Masters in Laguna Beach takes off for a journey around the globe with this summer’s production of Wonderful World from July 7 to September 2. A celebration of art through the magic of tableaux vivants (“living pictures”), the Pageant is highly regarded for its breathtaking theatrical illusions alongside original music, live narration, extravagant sets, and detailed costuming. This year’s show, Wonderful World, is a love letter to the joys of travel and the wondrous art to be found in every corner of the globe. Each night in the Irvine Bowl amphitheater, located at the Festival of Arts, audiences will be transported around the world to 17 countries during the 90-minute performance. Tickets start at $30 and are on sale now at PageantTickets.com or by calling (800) 487-3378. The Pageant of the Masters is sponsored in part byVolvo, Fidelity Investments, Celebrity Cruises, KOST Radio 103.5, and The Ritz-Carlton Laguna Niguel.

World travel and adventures around the globe inspired Diane Challis Davy, producer/director of the Pageant of the Masters, now in her 26th season, to select the theme Wonderful World. “One of my favorite heroines who provided inspiration for this year’s Pageant is the intrepid American journalist Nellie Bly,” shared Challis Davy. “In the 1890s, she attempted to travel round the world in fewer than 80 days, the challenge imagined in Jules Verne’s fictional classic Around the World in 80 Days. We’re researching her travel logs, diaries and ephemera related to her ambitious solo journey. Did she accomplish her mission? You’ll have to see the show!”

The production of “Wonderful World” will include live recreations of art from all over the globe including artwork from Swedish painter Carl Larsson, Mexican artist Diego Rivera, French painter Jean Béraud, Edvard Eriksen from Denmark, Japanese woodblock artist Toyohara Chikanobu, and many more.

“There are so many great artworks to recreate,” continues Challis Davy. “I also especially like our selections of African art, and our recreations of works by Swedish painter Carl Larsson. There is a beautiful painting of a Venice canal with carnival revelers by Tiepolo. And we’ll end the first act with a fantastic world dance party! I think the end result is that we’ll have a diverse array of artworks. We’ll visit 17 countries in 90 minutes. That’s what I call a ‘Bon Voyage!’”

Storytelling has always been integral to the Pageant’s theatrical vision, and scriptwriter Dan Duling took a moment to praise Richard Doyle, the Pageant’s narrator. “Writing for Richard is a privilege and a pleasure,” Duling said. “He’s a total pro.” A founding member of South Coast Repertory, Doyle won rave reviews this past winter performing as Scrooge in their beloved production of A Christmas Carol. This summer, Pageant audiences will hear him once again performing live every night.

“I hope world travel and experiencing life in other countries will become easy again soon,” Challis Davy mused. “In the meantime we are going to celebrate – through living pictures, music and dance – here in Irvine Bowl. And our professional composers and orchestra will fill the Bowl with original and authentic music from around the world.”

Challis Davy added, “We’re going to do everything we can to make sure Wonderful World is full of thrills, great stories, beautiful music, and extraordinary living pictures under the stars.”

The Pageant of the Masters is arguably one of the most unique productions in the entire world. Audiences are amazed and enchanted by ninety minutes of tableaux vivants (“living pictures”), incredibly faithful re-creations of classical and contemporary works of art, with real people posing to look exactly like their counterparts in the original pieces.

SPONSORS – The Festival of Arts and Pageant of the Masters are sponsored in part byVolvo, Fidelity Investments, Celebrity Cruises, KOST Radio 103.5, and The Ritz-Carlton Laguna Niguel

ABOUT THE FESTIVAL OF ARTS OF LAGUNA BEACH …The Festival of Arts, a non-profit 501(c)(3), has long been a local leader that has helped with the growth and development of the community and the arts in Laguna Beach. Established in 1932, the Festival of Arts’ mission is to promote, produce and sponsor events and activities that encourage the appreciation, study, and performance of the arts. Each summer for 90 years, the Festival of Arts has produced two world-class events: The Festival of Arts Fine Art Show and the Pageant of the Masters. Together both shows attract more than 225,000 visitors into Laguna Beach annually. 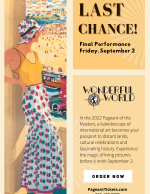 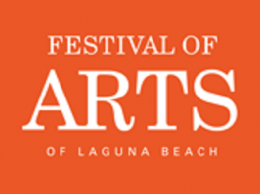 Festival Of Arts – Pageant Tickets for a Limited Time