The 20th Annual Vista Viking Festival was in full swing (or throw of an ax) this third weekend of September 2022, to much appreciation from both patrons and vendors alike. The previous physical festival was in 2019, while the last two years were on somewhat of a hiatus due to Covid-19 and were kept going online at www.VistaVikingFestival.com. Patrons could go watch online videos from their YouTube channel (Vista Viking Festival) to see musical performances, instructional videos, and much more. They even had an area for some of the merchants to sell their wares, and as awesome as that is, there’s just something to tactile window shopping that you don’t get digitally. For instance, if you happen to have forgotten your drinking horn at home, there is a plethora of engraved and plain horns you can choose from to purchase as soon as you enter. You don’t want to be caught without your drinking horn, do you? While there and around the festival, feel free to wander your eyes to the many vendors and marketeers selling their goods like Phoenix and Crow. Even the vendors themselves go shopping, like Tara Baumann from Gear Oils modeling her recently purchased headgear from Simply Bivin Designs. For the constant flow of regulars, customers, cosplayers, individuals, and families that want to connect with their ancestral genealogy, there’s plenty of leather, fur, charms, jewels, and weaponry to accommodate all walks of life.

With what once started as a small gathering of friends and family to picnic under the trees with food prepared by their authentic (born, raised, and trained) Norwegian Chef Amland Stein soon grew to add entertainment cultural programs that were presented by their members. Word spread, numbers grew, and the property increased to have a yearly Fall event that had surpassed an invitation only affair. Now, upwards of 10,000+ come to enjoy the marketplace, breathing history, village, and Heritage Hall every September. Though there are still a few invitations only events, like the Spring and Winter festivals, or the blacksmithing that happens on Wednesday’s, all you have to do is ask to attend. There is also the upcoming Lutefisk festival dinner in December (tickets available online) that will be held at the Norway Hall. Lutefisk, for those that are not inclined to Scandinavian dishes, is usually made from Cod (fish) and takes about a week or more to prepare. The Cod is dried, then soaked in a lye solution (yes, that powder stuff from Fight Club) for a few days, then rinsed, boiled (or baked). In the end of the ordeal, it has the consistency of Jell-O, and has lost more than half its protein. Interestingly enough, the lutefisk capital of the world is not Norway, but (claimed to be) Madison, Minnesota, because traditional Scandinavians rarely eat the stuff, and it is consumed more in the United States by Scandinavian-Americans in church basements.

You could start the day off over at the Loki Stage with storytelling from the amazing True Thomas, or the Scandinavian singing, music, and joiking (cattle calling) from Damekor. Music and entertainment grace the stage all throughout the days. Like later in the day, if you’re so inclined, you could enter the beard competition (of which I could not, though my father could). Just up the hill you can witness the Silversmith and his double bellows to heat up his furnace, a traditional Viking bed by Drafn, or pay your respects to Tierrynna who was a member of the equestrian group and passed this year (2022). The sweet smell of the bread baking from the handmade kilns will bring you back as you continue around to witness Sleipnir, a 33′ replica of the great Gokstad ship named after Odin’s magical horse. Built by Tom Kottmeier and his friend Ivar over the last two years they eventually will launch the eight oared ship in the San Diego Harbor. Eight oars for each of the eight legs of Sleipnir, visit www.vikingshipsleipnir.com for more information.

Walking around this beautiful area felt like taking a step back in time, with a bit of modern flair. Though not too modern since the Norway Hall was actually built back in 1955, and now with the help of established groups like the Norwegian Fish Club Odin (1992), the Sons of Norway – Norge Lodge (1895), and the Daughters of Norway – Hulda Garborg Lodge (1908) it has continued and grown. Entering the Heritage Hall, you will have the opportunity to see some of the Daughters of Norway participating in Rosemaling (or rose painting) and try some of their phenomenal cooking like Lefse baking, or handmade meatballs and mashed potatoes with gravy from the kitchen. Inside you can also check out your Norwegian genealogy, learn about the WWII 99th Battalion, check out the authentic woodcarving, and much more. The morning was a welcoming one with a bit of cloud cover while the sun was trying to work its way through, which it eventually did. I’m pretty sure though that all of the people dressed up in metal, leather, and fur armor and costumes wished the clouds stayed a little longer. But what is a Norseman without a bit of suffering. Just ask Lauren, who has spent the last three years making her outfit, skull crown and all. This is not just art; this is a lifestyle. But remember for future reference – no sharp objects.

If you have a really keen ear, you might hear the sounds of clashing of weapons coming from the Battle Arena, though they may be foam. Stay to watch the combats of Drafn or the Wolves ov Odin, the log toss, or the ever-fun fish fling. Stay until dusk and you’ll even get to watch the flaming ax throw! Next to them is the Blacksmithing area (with new mud wall for protection) and the pounding of the hammer to anvil as the Bandy Blacksmith Guild demonstrates their amazing talent. Even back in 2019 Make-A-Wish Wisconsin and the CC Riders sponsored “Alexander” to make a trip out so that he could experience the life of the Viking’s he loves so much and learned blacksmithing and other old crafts from the experts. Up in the Weapons Range you will hear the cheers of the onlookers as someone hits a bullseye. For those kids at heart, you can always try your hand (and arm) at bow & arrow shooting, spear, or ax throwing; just remember to wear shoes, there’s a dress code for certain activities. Don’t forget to exit through the Rainbow ‘Bubble’ Bridge, which all Norsemen/women must do. And for the younglings, there is the Kids Zone that includes facepainting, building your own sword and shield (and parade participation), learning to play the violin, and the learning-fun Rune Quest Scavenger Hunt game. Don’t forget to get your picture taken in the ship at the Viking Photobooth where all donations go to support the Multiple Sclerosis Society. Where since 2007 many of the Vista Viking Festival family have marched in the National Multiple Sclerosis – Pacific South Coast Walk MS.

And after a long day of perusing the many vendors, listening to the music, and watching the events unfold, a great way to end your trip to the Vista Viking Festival is to head up to the Northern Bar (21+ only) where you have a myriad of choices of Beer, Mead, Cider, and other spirits. If the geek is more your drink, then you can try your hand at rolling some D20 at the D&D corner and their homemade campaign. Just don’t get too rowdy for the security will come tackle you. Maybe not literally, but since a majority of them are from the North County Gurkhas Rugby Club, San Diego I wouldn’t put it past them for the thought to cross their minds. It should cross yours though so just be on your best behavior. If you do plan on coming next year in 2023, and I really hope you do, I suggest getting here early so that you can spend as much time strolling around the festivities and take in everything that peaks your senses. From the smells of the world-famous Berserker Dog’s cooking (Polish sausage, caramelized onions, secret beer cheese recipe), freshly baked bread from the handmade kilns onsite, meat pies, or Scotch egg (just try one, trust me!). If the smell of food isn’t your thing (how could it not be) then maybe the burning of wood and the stoking of the fires while metal is being melted and shaped, hammered with ferocious force by the Blacksmiths, or perilously poured into delicate molds by the Silversmiths. Maybe leatherworking is more your thing. Either way come next year to see the old world at work and help support the Norway Hall Cultural Center’s biggest fund raiser of the year. Doors open at 10 AM but the line will already be formed and waiting for you, attire, and all.

I would like to thank the sponsor Aloha Animal Hospital for their use of the Northern Bar area. The surrounding businesses Prohibition Brewing Company and the Vista Elks Lodge #1968 for their space and patients. Barrel & Stave Pour House (Vista), and Wild Barrel Brewing Company (San Marcos) for their added contributions. I would also like to thank James Nelson-Lucas aka Kvasir (PR Director of the Vista Viking Festival), for giving me a personal and amazing tour of the festivities with more historical information that I could shake a spear at. Which for your personal knowledge was actually the preferred weapon of choice by the Viking (or should I say Northman), not the sword – or hammer! Until next time, Velkommen til Norge, or, Welcome to Norway. 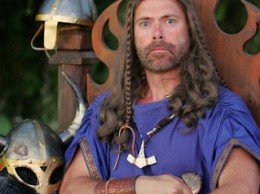 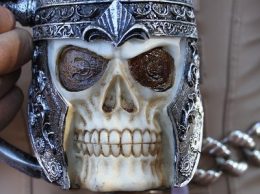