Tonight’s game in Lake Elsinore began as many have this season; with James Wood absolutely destroying a baseball to deep center field. After just 26 MiLB games, Wood has a .994 OPS and was just recently promoted to the Top 100 Prospects list.

This gave the Storm a fleeting 1 run lead. One they would give up on a passed ball to tie the score in the bottom of the very next inning. But as has been repeated on the field and in these recaps all year long, the Storm responded. A loud Nerwilian Cedeño double would have them re-take the lead in the bottom of the 3rd inning.

Bodi Rascon, after going 5 innings without giving up an earned run, would be relieved by newly returned Matt Sparling who, despite some base runner trouble, would extend Lake Elsinore’s scoreless earned run streak to 6 innings. It wouldn’t be until newbie, Danny Denz, would enter the game that the Storm would find themselves in a sizeable hole.

Denz would surrender 5 earned runs in the 7th inning, the first of which would be a bases-loaded hit batsman to tie the game. A double from Arol Vera and a second hit by pitch would be enough for Denz to leave the mound in favor of set-up man Keegan Collett. Collett would allow a single to score Denz’s 5th run of the game but would also go 1.2 innings without allowing an earned run of his own.

The Storm would then experience some baseball magic to rally back down 4 runs through 6 1/2 innings. The bottom of the 7th is where the Storm would do a majority of their damage. A fielding error and a 5 pitch walk would put two men on base for the aforementioned and supremely talented James Wood. Wood would send a double to left field, scoring Aquino and putting a man on second and third. A Cedeño groundout, one of his four RBIs on the night, would bring the Storm within two while the second double of the inning from Marcos Castañon would put a 3 spot on the scoreboard in the 7th.

The very next inning, more timely hitting from Cedeño would score Aquino on a sacrifice fly. This is where most of their magic would then take place. In the top of the 10th, with an automatic runner on second, James Wood would make an acrobatic catch in center field to keep the runner in place. A Jose Bonilla pop-up and an Adrian Placencia groundout would then give the advantage back to the Storm.

Unfortunately, a poorly placed bunt would have Lake Elsinore’s automatic runner thrown out at 3rd before the side was retired without a run being scored. This would send the game to the 11th inning and Alexuan Vega back out to the mound for his 3rd inning of work.

He would induce a groundout that put the runner at third base but then a fantastic play by Carlos Luis, something of consistency at the position, would keep him there. Werner Blakely would then softly ground out to Vega who needed to make an athletic play to get the out at first. His following roar would be both of triumph and relief.

This would bring Nerwilian Cedeño to the plate, 3 RBIs in his pocket, and a not-so-sneaky fast James Wood as the automatic runner. Cedeño wouldn’t waste this opportunity and after fouling multiple balls off, he once again made solid contact to finish the game. This win would be the Storm’s 6th home victory in the last 8 games and give them the most wins in the entire California League.

The Storm will again play at The Diamond tomorrow night against the Inland Empire 66ers at 7:05 PM. 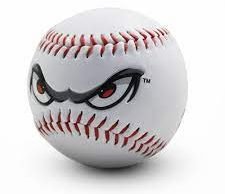