By TR Robertson  -Another successful Novemberfest brought out over 800 people on Saturday to Alta Vista Botanical Gardens as they strolled through the Gardens, stopping by the 23 Breweries and Meaderies tents to enjoy samplings of beers, meads, and ciders. The annual event gives 100% of the proceeds to support the Alta Vista Botanical Gardens and the Amigos de Vista Lions Club. This popular fundraiser provides money to help improve the facilities at the Gardens and help support the Lions Club vision impaired program, Center for Sight and Operation Hope.

Along with the breweries and meaderies in attendance, there were five food vendors, a few businesses and craft booths displaying items they offered, a silent auction with wonderful gift baskets available for bidding and live music supplied by Oceans Band – A Pearl Jam Tribute band. Several homebrewer groups were in attendance with beer, mead, and cider varieties available for unlimited tasting. 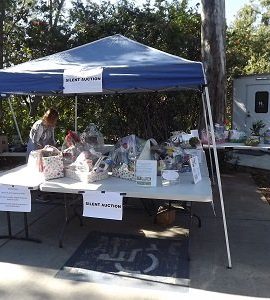 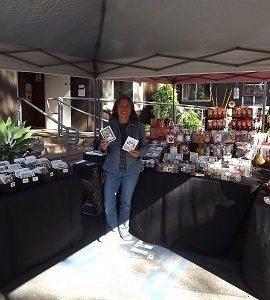 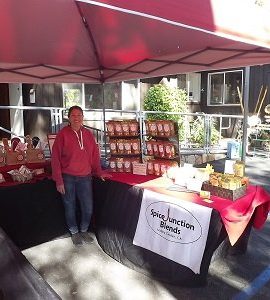 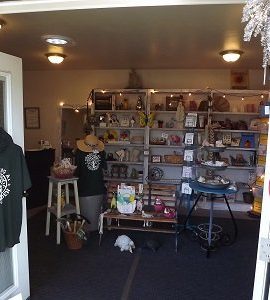 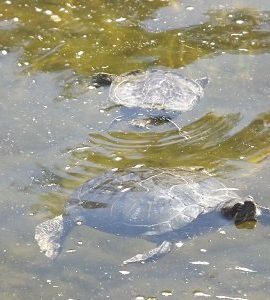 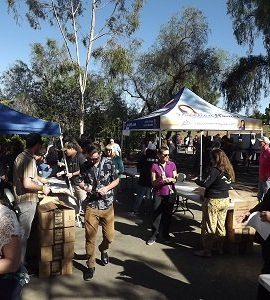 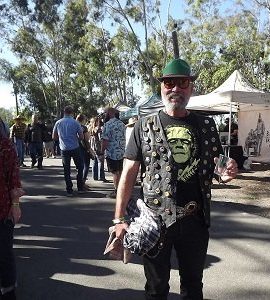 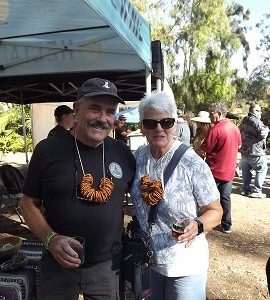 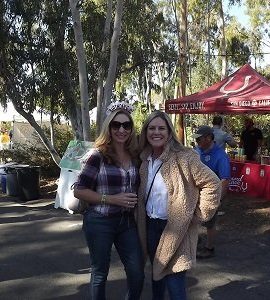 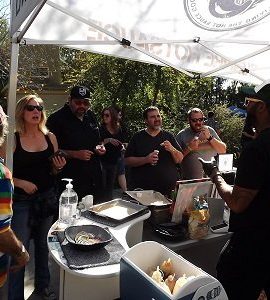 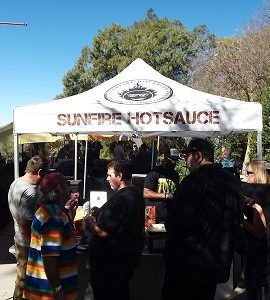 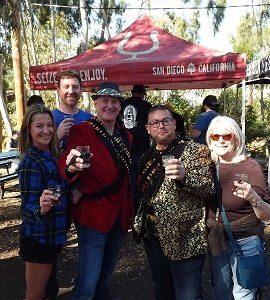 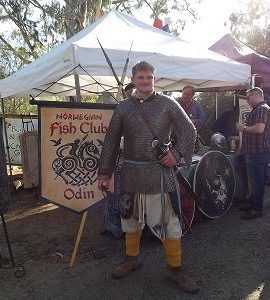 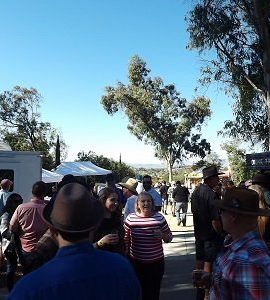 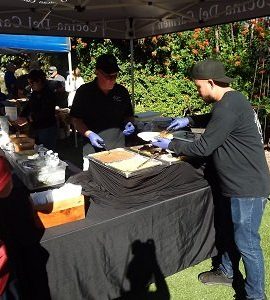 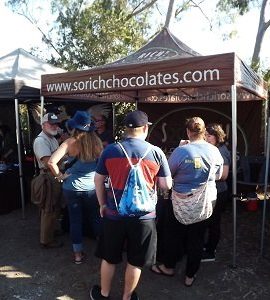 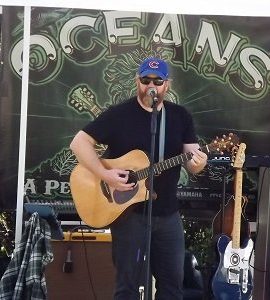 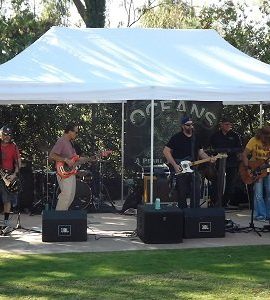 The line to get in began to build around 11:30 am just outside the gates of Alta Vista Gardens, waiting for the noon opening. For Novemberfest only people 21 years of age and older were allowed in, no children and no animals. Entering before the opening I spoke with Naomi Stein, Vice President of Alta Vista, as she prepared the gift basket bidding sheets people could make their bids on. Naomi said that 35-40 Alta Vista volunteers are active in helping with the different activities that Alta Vista sponsors as well as volunteering during the week to assist in maintaining various areas around the garden. Running the Alta Vista Gift Shop on this Saturday was Ann Little. Ann said that the Adopt-a-Garden Program is popular, but they are always looking for more volunteers. Ann told this reporter about the Red Slider turtles in the pond and gave us a bag of turtle food to feed the turtles. Just outside the gift shop sisters Shara Cuyno and Bernadette Carvalho had their booths set up. Shara, from Valley Center, offered Spice and Handcrafted Gourmet Blends in her Spice Junction Blends booth and Bernadette offered a variety of holiday crafts and cards in her booth. Bernadette called herself a hobbyist entrepreneur. The sisters said they go to a few events around the North County area and mentioned they will next be at the Holiday Lights Crafts Fair on November 25 at the Antique Gas & Steam Engine Museum in Vista.

As we wandered along the pathways of the Gardens, we passed the different tents with the breweries and meaderies setting up. At brewfests one unique aspect is to look at the unusual names the brewers have selected for their beers, meads, and ciders.  Many of the beers on tap at this event were seasonal varieties, many using blueberries or pumpkin. We spoke for a while with Jerry Wright from the North County Homebrewers Association concerning the popularity of these brewers experimenting and sharing their ideas for beers, meads, and ciders. Jerry had several items on the lengthy Homebrewers menu, including his Bourdon Barrel Aged Ale. Jerry said they meet in a brewer’s home to get a firsthand look at the brewing process. Also in attendance was The Society of Barley Engineers, founded in 1994. This group meets the first Wednesday of each month at 6 pm in the Booze Brothers Brewery. Booze Brothers was in attendance, pouring a great lager I tried. They also discussed their Vista, Oceanside, and Fallbrook Taprooms and the Vistonian, located in downtown Historic Vista, a large facility used for a number of events needing a larger space. For example, a salsa dancing group uses the facility and the Heroes of Vista presentation by the Vista Chamber was held in the Vistonian. Booze Brothers also offers the Woodshed Venue, located next to their Vista Taproom at 2545 Progress St., for meetings and other events.

Wandering from tent to tent, most breweries in Vista were represented as well as meaderies. Several of the meaderies were from the Temecula area, such as Batch Mead. Batch opened in 2019 and was offering a seasonal pie box with meads flavored as the Thanksgiving flavors. I tried the maple flavor. It was delicious and had a definite maple flavor to the mead. The majority of the meaderies offered shipping options for ordering their products. My son tried Pineapple Under the Sea at Chubby Cheek Meadery, also from Temecula. Twisted Horn Meadery from Vista was also represented. I tried their Cherry and Apple Mead, and it had a great flavor.

There were several wineries in attendance. Propaganda was pouring several of their varieties. Propaganda is in CoLab at 2129 Industrial Ct. in Vista. Colab is one of the newest brewery and winery facilities in Vista. It was formally Indian Joe’s Brewery, and is now the home for Laguna Beer Company, Barrel and Stave and Breakwater Brewing as well as Baby’s Badass Burgers. All three of the breweries were at Novemberfest.

Several other businesses were at Novemberfest, many working out of their homes or in small warehouses to distribute their products. All were offering samples of their products. Party Pop gourmet popcorn had several varieties for tasting, I tried the salt and vinegar, delicious. SoRich Chocolates owner Johna Nilson was back at Novemberfest offering many different samples. I had the dark chocolate toffee, and it was great. One popular business that had a small crowd gathered trying the product and purchasing bottles from him was Sye Samad owner of Sunrise Hotsauce. I asked Sye if he had ghost pepper hot sauce. He said yes, but even stronger was his Black Garden Mandarin and the Raspberry Reaper as well as the Scary Berry Super Nova. I passed on trying the hot sauce. Dressed in full Viking regalia were members of the Norwegian Fish Club – Vikings of Vista, promoting their association and the Viking Festival held in Vista every year.

If you were hungry at Novemberfest you would not be disappointed with the food options. The Amigos de Vista Lions Club was cooking up a variety of items, the burgers looked great. Also in the Rose Garden eating area was Sticky Chicken, Best Pizza and Brew, Cocina del Carmen and Psvilized. We spoke with several folks at Cocina del Carmen, located at 1350 East Vista Way. This popular Oaxacan Cuisine restaurant offered several different dishes and the street tacos looked awesome. To try something new I tried the Loaded Bake Potato with Pork from Psivilized. The bowl was big enough for Brian and I to share and we were stuffed. They also offered a variety of Mac & cheese bowls. Psivilized is at 618 S Santa Fe Ave in Vista.

The Novemberfest was a success as could be told from the festive atmosphere and smiling faces throughout the Gardens. We ran into folks with necklaces of pretzels sharing with anyone who asked as well as Henry Peters and Douglas Osterholt who wore straps of sausages and pretzels over brightly colored jackets. Henry and Douglas also shared with anyone who asked. The breweries and meaderies personnel discussed their products and breweries, bidding for the silent auction and raffle prizes was active and the bright, sunny Saturday was a success for anyone who attended being there helped the Alta Vista Gardens and Amigos de Vista Lions Club. You are encouraged to check out the Alta Vista Botanical Gardens web site if you are interested in volunteering, becoming a member, or finding out about upcoming activities at the Gardens. Go to www.AltaVistBotanicalGardens.org.