Loading...
You are here:  Home  >  Calendar >  A New Look for a Campy, Classic Musical at New Village Arts

A New Look for a Campy, Classic Musical at New Village Arts

TR Robertson  –AJ Knox, Director of Connectivity and Director of the current musical on stage at Carlsbad’s New Village Arts, wanted to present “Little Shop of Horrors” with a bit of a twist to give this campy, semi-horror musical a new look. Mission accomplished with the Craig Noel Award Winner for Featured Performance in a Musical, Eboni Muse, colorfully dressed as the bloodthirsty plant from outer space, Audrey II, belting out the memorable “Feed Me” and “Suppertime” and scaring those around her.

This horror, comedy, rock musical, with music by Alan Menken and lyric/book by Howard Ashman, is taken from the 1960 black & white B movie primarily, with a few changes along the way. Interestingly enough, a very young Jack Nicholson played a minor role in the movie. Menken and Ashman’s musical would open Off-Broadway at the WPA Theatre in 1982, moving to the Orpheum Theatre and enjoyed a 5-year run, becoming the highest grossing production in Off-Broadway history and has won the Drama Critics Circle Award and Drama Desk Award for Best Musical. A 1986 film starring Rick Moranis and Steve Martin would revive the musical. “Little Shop of Horrors” is known for the inclusion of music centered on early rock & roll, doo-wop and Motown. 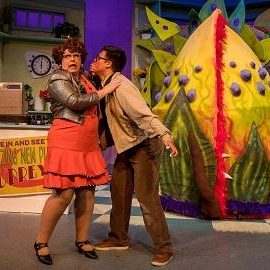 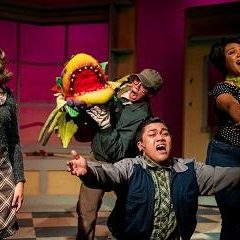 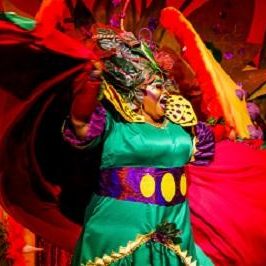 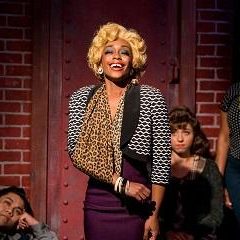 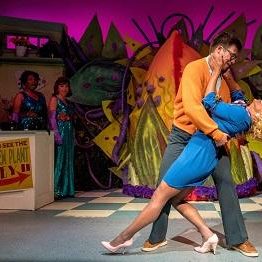 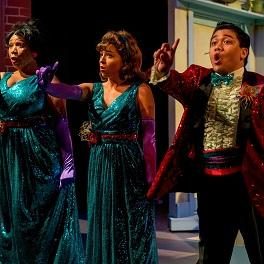 NVA has brought together a talented cast, many are award winning and award nominated actors and actresses, who are obviously enjoying being on stage and presenting this most unusual musical. Sittichai Chaiyahat returns to the NVA stage as Seymour, the timid, love struck flower shop employee. He fits this role perfectly and stands out in his duet with Cashae Monya, who plays Audrey, in the most memorable song from this musical, “Suddenly. Seymour”. Monya, as the other flower shop employee – Audrey, s at your heart as the abused girl friend of the laughing gas addled dentist Orin. Monya, a Craig Noel Award nominee, passionately sings “Somewhere That’s Green” and a number of other songs throughout the musical. Playing the sadistic dentist Orin is Philip David Black, also a veteran of NVA. Black also has a number of other role, costumes and accents he delivers at various times on stage, each handled with perfect comic flair including a bass voiced bum to back-up the “Little Shop of Horrors” street chorus. Mushnik, the flower shop owner, is usually presented as male, but the NVA production features a strong performance by veteran and talented actress Melissa Fernandes as the hard-nosed Mrs. Mushnik, who is seeking any means possible to keep the shop open in the poor area of Skid Row, which will lead to an unfortunate ending for Mrs. Mushnik.

The human blood seeking space plant Audrey II is played by Craig Noel Award winner Eboni Muse. It takes a while for the audience to first glimpse Eboni as Audrey II, but when she bursts out of her Audrey shell; her booming voice will overwhelm you. Audrey II takes charge and the rest of the play will center on her sensational desire to be fed. Having seen “Little Shop of Horrors” numerous times, NVA’s interpretation of Audrey II is probably the most striking presentation I have seen and Eboni Muse presents a dominant, over-powering, ominous blood sucking plant, worthy of any classic B sci-fi creature.

Rounding out this talented group is the “Little Shop of Horrors” Skid Row Chorus, Chiffon, Crystal and Ronnie. This trio wanders in and out of the various Skid Row locations for the story, first appearing at the opening to deliver the “Prologue” to set up the story, then appearing, disappearing and reappearing in a variety of costumes, to either join in with other performers or become a part of Audrey II. Providing great harmony, reminding some of us of the doo-wop groups of old, were Patricia Jewel as Chiffon, Chris Bona as Ronnie and Natasha Baenisch as Crystal.

Carlsbad’s New Village Arts production of “Little Shop of Horrors” has taken a musical, presented many times in many different ways, and they have found a most entertaining and unique way to bring something new to the stage. The musical will be on stage until August 4 at 2787 State Street in Carlsbad. Tickets are available at 760-433-3245 or go to www.newvillagearts.org.

NEXT ARTICLE →
NC Rep’s “A Walk in the Woods”