After a 2 game losing streak to Escondido and Ramona, the Warriors came back to their old form as they found a way to win as they defeated the Golden Eagles of San Pasqual High School. Under current head coach and former Duke great Eric Meek by a 65-55 score games they proved to themselves after trailing 14-10 after the first period.

Fallbrook Warriors Boys Basketball Coach Ryan Smith: “We’re an improved team and handled adversity on how to win games while on the court.” “Everyone contributes so we can start winning games, we led 37-36 we sometimes forget to do small things like how to set in our 1-3-1 defensive zone, miscommunications on how to do well on offense.”  “In the 2nd half we shot the ball better allowing us to win.”  “For us to improve for a winning season by keeping being yourself. Learning to play hard in every basketball game no matter if your up or down by 15 points. Keeping being focused for the team.” Joel Calhoun and Cooper Sherman are the 2 leaders who stepped up for us and average 20 points per game. “The Valley League is competitive we had Escondido and Ramona who gave us battles, I hope this win will help us to improve every game this season.”

Joel Calhoun for Fallbrook Warriors led with 27 points vs. San Pasqual:  “Playing San Pasqual in this conference is a battle every year. That coach does a good job on the scouting. Last year we had a 1-25 record but this year we are proving who we are and playing as a team along with pulling out the 50/50 games In the first half, we had a hard time finding our groove, we are stepping up together as a team which gets the ball rolling for us”.

With the win the Fallbrook Warriors 13-5 as they were led by Joel Calhoun with 27, Cooper Sherman contributed with 18 Yoni Villagran 12.  Fallbrook will take on Mission Vista on 1-24-20. The Golden Eagles of San Pasqual were led by Mason McCreary with 20 points and 15 by Daniel Palmer, will be at Escondido to take on the Cougars.  Tipoff is 7 PM 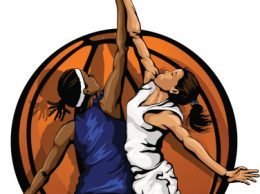