This week, as new COVID-19 cases continue to decline, San Diego County reported 55 more deaths, bringing the total past the 5,000 mark. More on that plus these stories:

COVID-19Countywide and here in Carlsbad, COVID-19 metrics are continuing to get better.

Just as predicted, Omicron cases are decreasing almost as quickly as they increased. However, due to the sheer number of cases compared to previous surges, we have, unfortunately, continued to see people hospitalized, with a portion of those not ever making it home. Understandably, passing the 5,000 deaths mark was met yesterday with a sense of sadness, thinking of all the families and loved ones left behind over these past two years.

The San Diego Union-Tribune points out that San Diego County’s deaths per 1 million residents (1,516) is much lower than the statewide rate (2,115), which is lower than the nationwide rate (2,841). With two years of data now to draw from, the county’s COVID-19 Watch newsletter this week reports the most common underlying conditions among those who have died:

The county health officer continues to urge everyone who is eligible to get vaccinated and boosted and to follow recommended health precautions when in higher risk settings, like crowded indoor spaces. Here is a link to all the latest health guidance. As always, thank you for helping to reduce the spread of COVID-19 in Carlsbad.

Progress on City Council goalsLast March, the City Council asked staff to focus on three long-term goals to address some of the Carlsbad community’s top priorities:

I am pleased to report progress on all three this week … 15 more unsheltered transitioned into permanent housingCity staff reported Tuesday that ongoing efforts plus new tools are making a tangible difference in our efforts to reduce homelessness. During the second quarterly report of the fiscal year, covering October through December 2021, staff reported, the city helped 15 people experiencing homelessness get into permanent housing. This brings the total to 31 who have successfully transitioned off the streets since the city’s fiscal year began July 1. Other progress for this three-month period reported at the Feb. 22 City Council meeting, includes:

New activities during this timeframe included:

Early this morning city staff and volunteers participated in the nationwide Point in Time count, which provides a snapshot of the population experiencing homelessness in a given location. I am very proud of the fact that Carlsbad was the first city in North County to exceed the number of volunteers needed, an even more impressive fact when you consider volunteers needed to report at 3:30 this morning to start the count. Thank you to everyone who helped.  Improving public safetyProtecting the public’s safety is the most important responsibility entrusted to city governments. In Carlsbad, leaders have demonstrated their commitment to public safety time and time again, whether you’re talking about the original decision to stand up our own Police Department or more recently building the region’s most advanced public safety training center. A couple of years ago, the Fire Department conducted something called a Standards of Cover study to evaluate current and future readiness.

We already took delivery of new ambulances, and just this week, a new, fully outfitted fire engine made its way to Carlsbad.

After getting cleaned up, the engine was “pushed in” to the vehicle bay by its crew for the first time. Don’t worry, the new engine is working just fine. The push-in ceremony is a fire service tradition dating back more than 100 years. Before fire engines had, well, engines, they were pulled by horses. After each call, firefighters had to push the fire engine back into the station. New plan to manage growthThe final bit of progress I’ll share on the City Council’s goals is the formation of a new citizens committee. The application period has closed, and staff are getting ready to present the applicants to the City Council March 8.

What’s next? In deciding to have an independent commission choose new district boundaries, the City Council took itself out of the decision totally. The new map went into effect immediately last Thursday evening. The City Council will need to update our municipal code, but that is only to reflect the new map chosen by the commission. How are you affected?

Thank you! In all, the commission received 76 maps submitted by members of the public and hundreds of comments, all of which helped them select a map that they felt best reflected community priorities. We’ll do this again in 2031, following the 2030 census. Learn more.

This Saturday, a new exhibition opens at the Cannon Art Gallery that puts a playful twist on the gallery’s location in the Dove Library complex by highlighting pieces of art created from or inspired by books.

The city’s Curator Karen McGuire said she and other members of the city’s Library & Cultural Arts Department have wanted to host such an exhibition for years. It features 14 local artists using books – or ideas found in books – to create unique sculptures that interpret the material in a new way.

The public is invited to a free opening reception in the courtyard outside the gallery from 5 to 7 p.m. Saturday, hosted by the Carlsbad Friends of the Arts. The exhibition runs through May 14.

Live your best life at any ageBy 2035, the United States will — for the first time ever — be a country that with more older adults than children. This is big news for the City of Carlsbad, which already has a larger older population than many of our neighboring cities.

Get involved: Upcoming meetingsStarting next week, the city’s public meetings will be in person instead of virtual. We have retrofitted our City Council chamber with new air circulation and other features to reduce the spread of COVID-19. We will also have outside seating available weather permitting. Meetings scheduled next week include:

The next City Council meeting will be held March 8, start at 5 p.m. (NOTE NEW TIME).

Our most recent cold snap came just in time to wrap up the winter Olympics. However, even with yesterday’s hailstorms, most people would not expect to find athletes in Carlsbad who excel on the snow and ice. That’s why it was so exciting to see not one, not two, but three Carlsbad residents competing in China this year:

Shaun White, arguably the greatest snowboarder of all time, placed fourth in the men’s halfpipe, capping a competitive snowboarding career that includes three gold medals won over the course of five Olympic games, plus countless other national and worldwide titles. Born and raised in Carlsbad, he went to Carlsbad High and has been making headlines in snowboarding for two decades.

Kaillie Humphries is now the first-ever gold medalist in the Olympics’ new monobob event. Kaillie moved to Carlsbad in 2019 from Canada, where she was a three-time Olympian with gold medals in the two-woman bobsled in 2010 and 2014 and a bronze in 2018. You might remember that the City Council recognized Kaillie last year, when she won the first ever world championship title for this new sport.

Tessa Maud, an 18-year-old snowboarder, made her Olympic debut in Beijing, finishing 16th in the women’s half-pipe. Tessa is a Carlsbad native who has been attending school online as she trains in Mammoth and competes around the world. She competed in the 2020 Winter Youth Olympics and earned two silver medals at the Junior World Championships.

Congratulations to these amazing Carlsbad athletes! That’s all for now. I’ll be back next week.
By the way, if you have friends or family who would like to get these emails, here is a link you can share. Our list continues to grow, and the more the merrier! An engaged community is one of so many things that makes Carlsbad a wonderful place!

Carlsbad Connects app is an easy way to report things that need repair or attention around town, like potholes, sidewalk cracks, traffic light outages, graffiti and code enforcement issues. Submit service requests anonymously or create a free account where you can track progress and see what other people have reported. 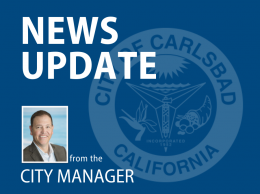