TR Robertson -The second show of Moonlight Amphitheatre’s 41st season, Cinderella, was filled with beautiful voices, comedy, wonderful dancing, colorful and impressive sets, and a timeless fairy tale. The version on the Moonlight stage is from music by Richard Rodgers, lyrics by Oscar Hammerstein II with an adaptation by Douglass Carter Beane. A nearly full Moonlight Amphitheatre, filling the amphitheater seats, grass areas and the hill above the amphitheater, were comprised of adults of all ages as well as children, many of the children dressed in Cinderella gowns. 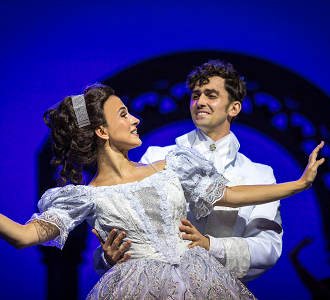 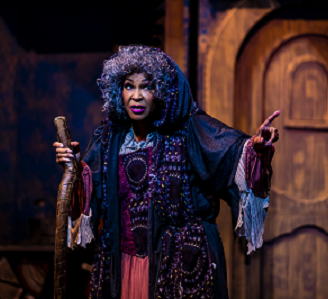 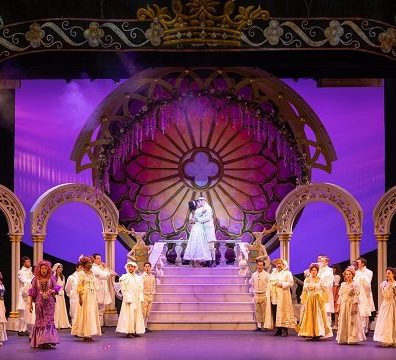 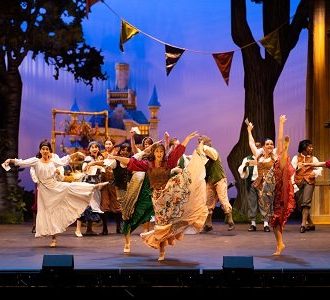 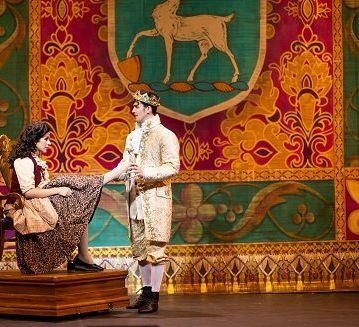 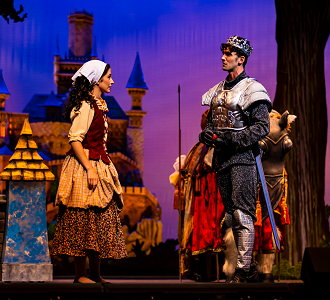 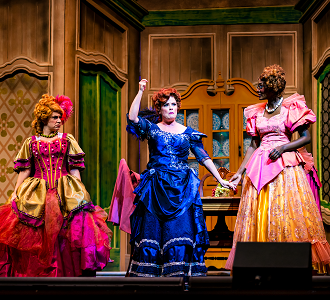 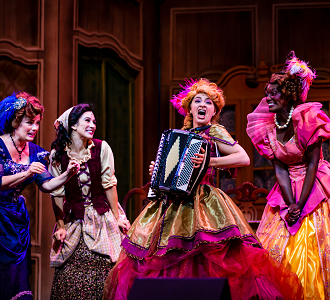 The Cinderella story dates to sometime between 7 BC and AD 23 Greece and the story of Rhodopis. The first literary European version of the story was published in Italy by Giambattista Basile with his Pentamerone, written in 1634. A Grimm’s version was published by Brothers Grimm in 1812 as a folk tale in Grimm’s Fairy Tales. All of these versions recount a girl living under the subjugation of a cruel family, succeeding through a variety of means to achieve recognition and success and rising above her upbringing.

The modern version most in the U.S. recognize today has appeared as ballets, operas, animation, film and television productions and musicals. The Rodgers and Hammerstein musical, Cinderella, is their only musical written for television. It appeared on CBS on March 31, 1957, starring Julie Andrews. It would be remade for television in 1965 and 1997. The musical’s first Broadway production would come from a book by Douglas Carter Beane and opened in March of 2013 at the Broadway Theatre, running until 2015.

Beane’s version would introduce a number of new social and moral issues to the Cinderella tale, such as, civil unrest, protest against unjust authority, political cover-up, family struggles, choosing kindness and forgiveness over hate, as well as those original themes of struggling to rise above the position you are in, seeking love, never giving up on your dreams and friendship.

The success of any musical depends on the quality and performance of the leads and ensemble chosen for the musical and you will not be disappointed with this performance and production. Dhora Da Luz, making her Moonlight debut, plays Ella (Cinderella) and brings a beautiful performance as this iconic character. You will love the quality of her voice in songs like “In My Own Little Corner,” “Impossible,” “Do I Love You Because You’re Beautiful” and others. Playing Topher, the Prince, is Samuel Shea, who last appeared at Moonlight as Larry in A Chorus Line in 2021. Samuel presents the Prince with a bit of humor, a dash of sophistication and a dollop of pizzazz. He also has a tremendous singing voice and blends magically with Dhora in numbers like “Loneliness of Evening, “Ten Minutes Ago” and “Do I Love You Because You’re Beautiful.”

The powerful, stunning singing voice of Anise Ritchie, playing Crazy Marie/Ella’s Fairy Godmother, shines in the musical in “Impossible” and “There’s Music in You.” Ritchie returns to Moonlight after a stand-out performance as Erzulie in Once on this Island. Craig Noel Award winner Eileen Bowman plays Madame, Ella’s stepmother. She presents the cruel, mean stepmother mixed with humor and great physical presentation, making Madame a character you both like and loath. Bowman also has a great stage voice you will not forget. Playing Madame’s “real” daughters are Kumari Small as Gabrielle and Samantha Wynn Greenstone as Charlotte. Both have been in previous Moonlight productions.

Steve Gunderson, a Craig Noel Award Actor of the Year, made his Moonlight debut as the conniving Sebastian, the Prince’s council. Zane Davis, playing Lord Pinkleton, delivers the messages to the townspeople with great enthusiasm, never missing a beat in one scene when the small clapper on his large bell goes flying into the orchestra pit. Drew Bradford plays Jean-Michel, local activist, and love interest of Gabrielle.

Cinderella is directed by Noelle Marion who last appeared as Inga in Young Frankenstein. Tamara Paige is Music Director and Conductor of the twenty member Cinderella orchestra and Devon Hunt is Associate Music Director.

Cinderella has something for everyone. There are numerous dance numbers performed by the leads and ensemble, moving solos and duets, funny chase scenes the kids will love and a bit of magic clothing changes by Ella and Marie. Along with all of this, the underlying themes and messages will give you much to discuss with your families and friends.

Cinderella will be on the Moonlight stage until June 25th. Tickets are available at 760-724-2110 or go to www.moonlightstage.com. The next musical coming to Moonlight is Something Rotten. The months of June and July will also have several tribute performances beginning with “The Official Blues Bothers Revue” on June 28th. 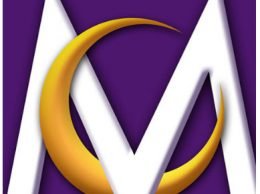