Warning: A non-numeric value encountered in /home/customer/www/thevistapress.com/public_html/wp-content/themes/dailypress/include/breadcrumbs.php on line 54
Calendar >  Congressman Issa Where Were You?

Congressman Issa Where Were You?

Billed as an Emergency Town Hall meeting by organizers and with a public invitation to Congressmember Darrell Issa, an event took place this evening at the Jim Porter Recreation Center in Brengle Terrace Park. Rarely has Vista seen such public outpouring.

At 5 pm people started to show for the meeting that would start at 6 pm. The meeting came about when a coalition of groups who had been unable to contact Issa directly, rented the Recreation Center here in Vista. According to the organizers, Issa had declined a town hall meeting stating that it would cost $50,000.00. The organizers of Fight4ourhealth then raised enough funds to pay for the rental and a full-page advertisement a week ago in The San Diego Union-Tribune. That advertisement invited Issa to attend an “Emergency Town Hall Meeting” on Feb. 21st to discuss healthcare issues. 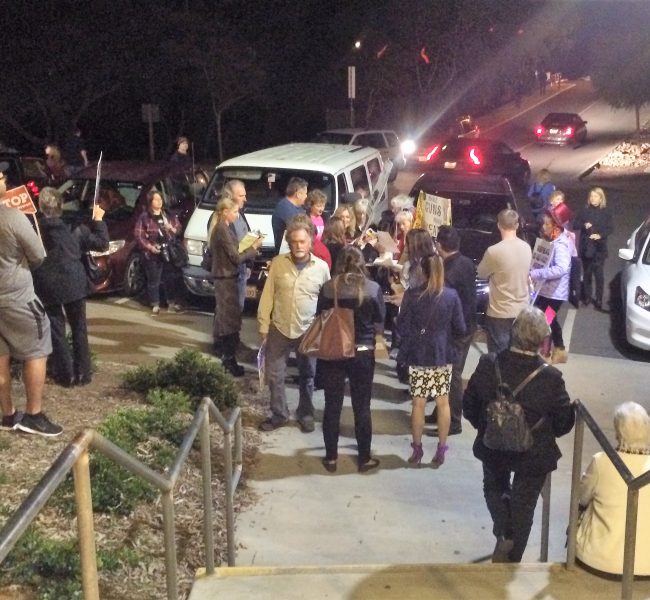 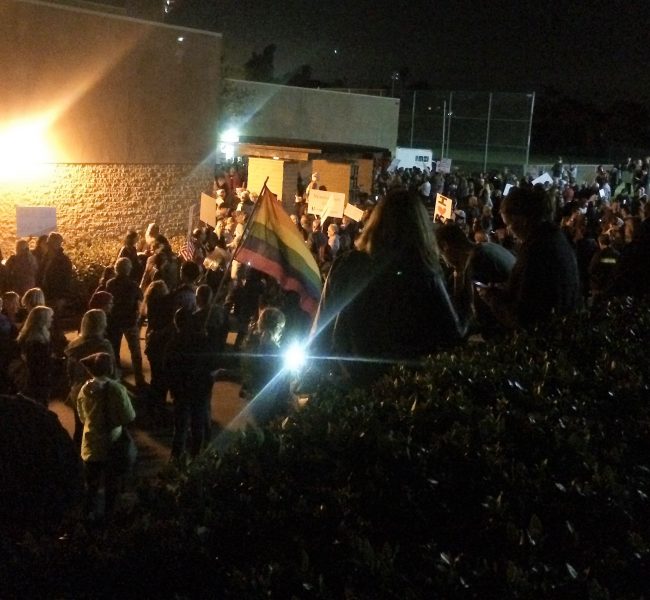 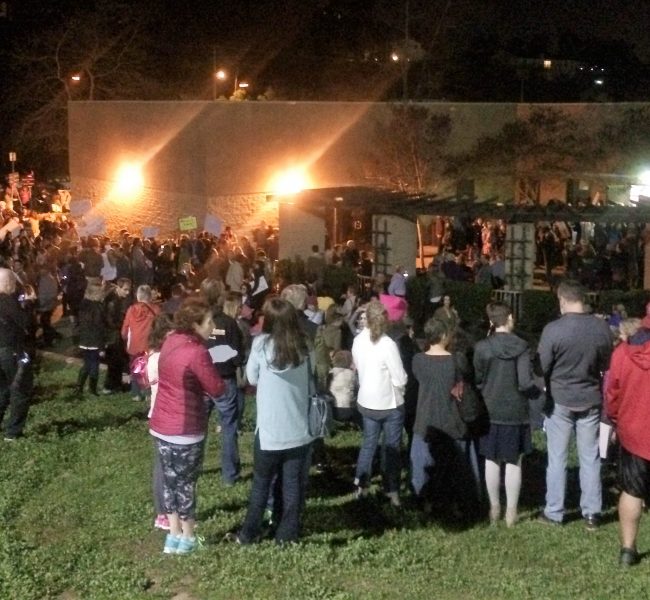 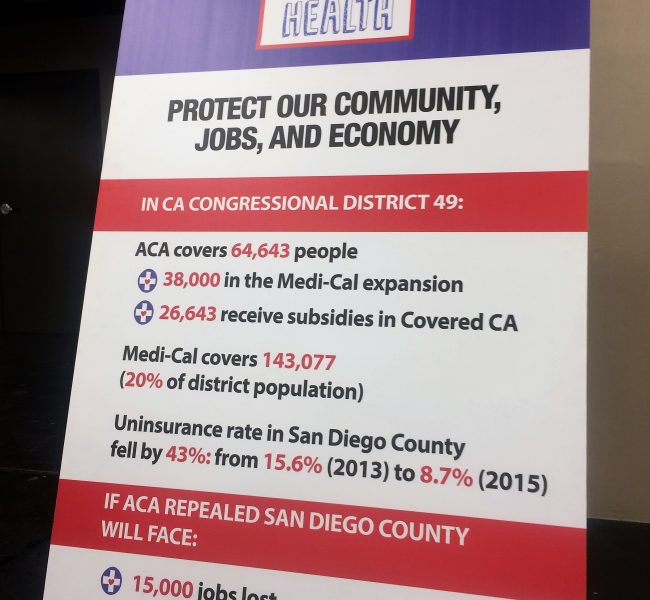 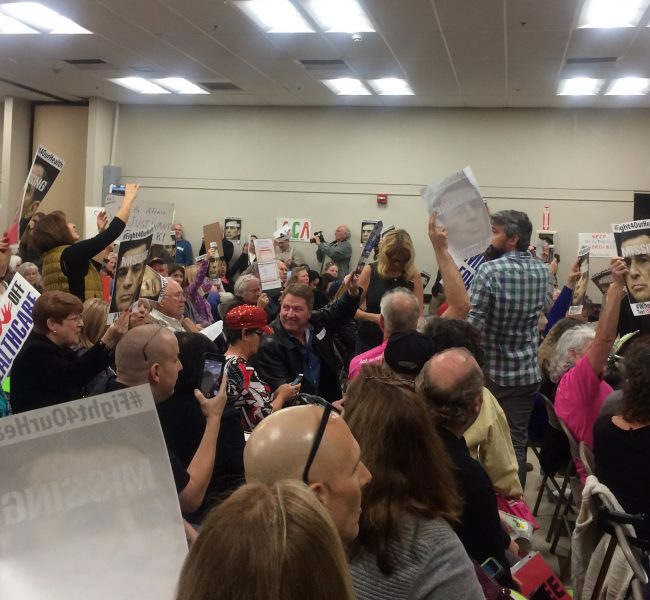 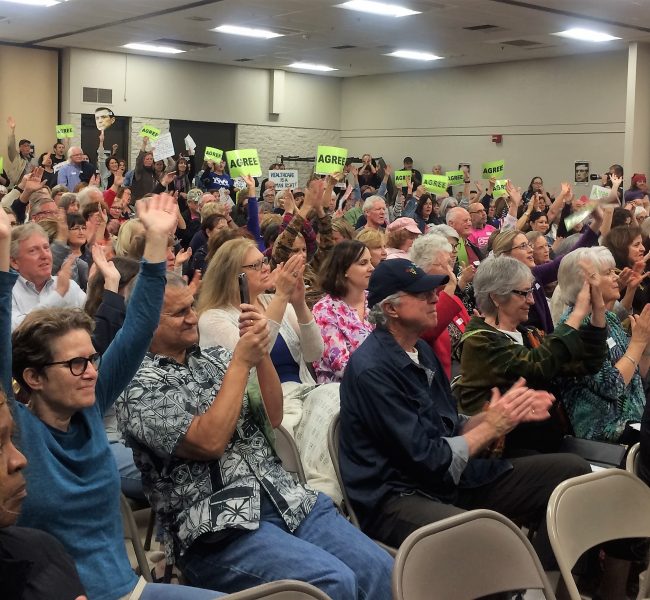 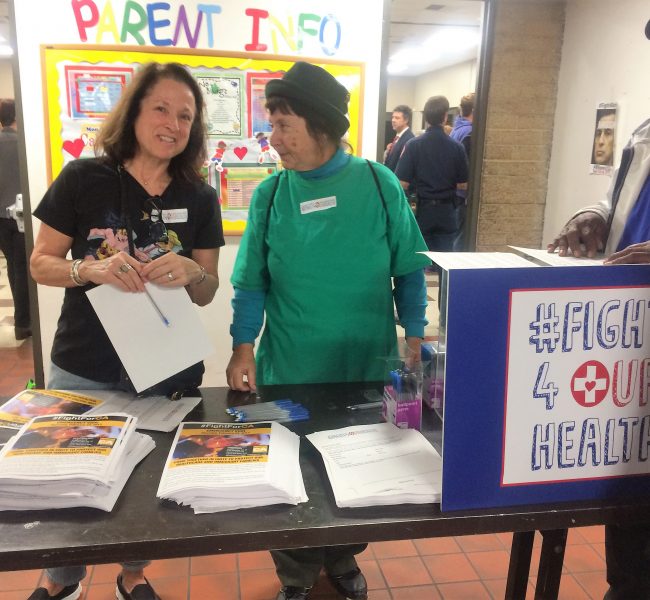 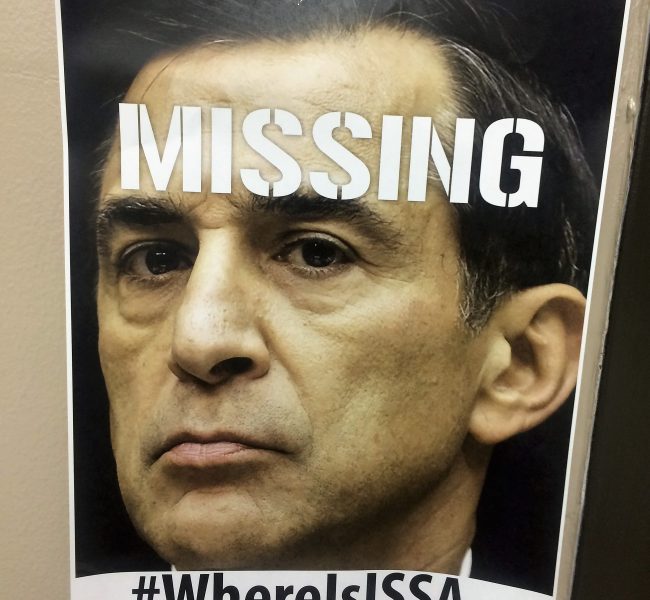 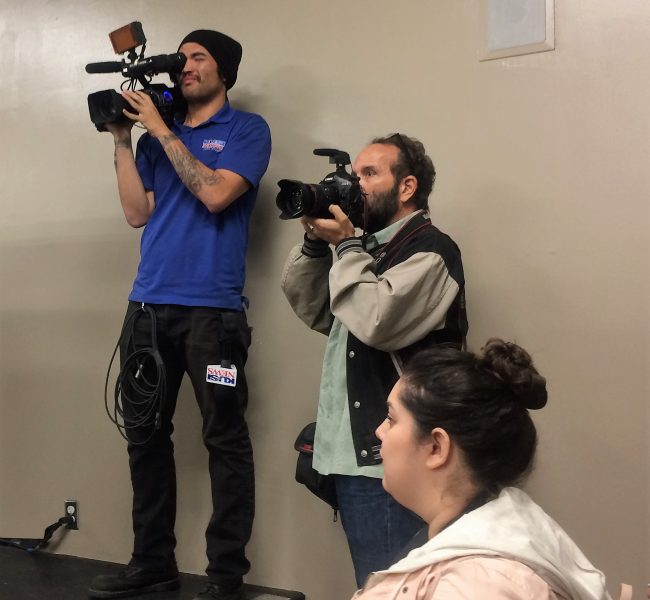 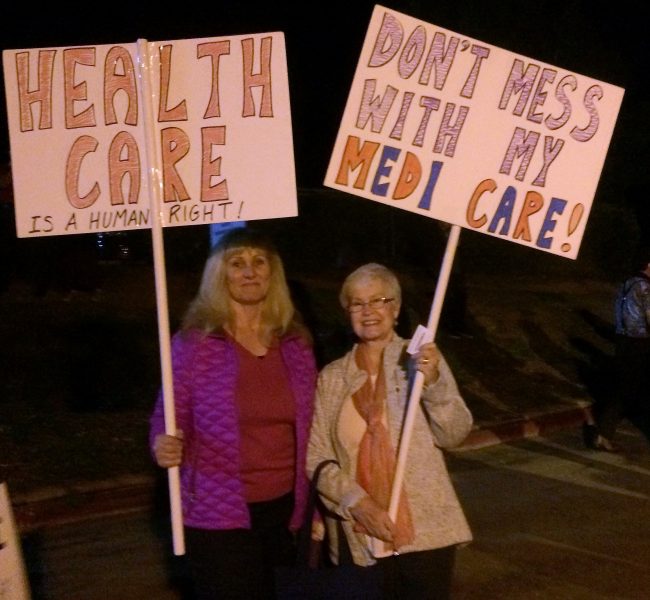 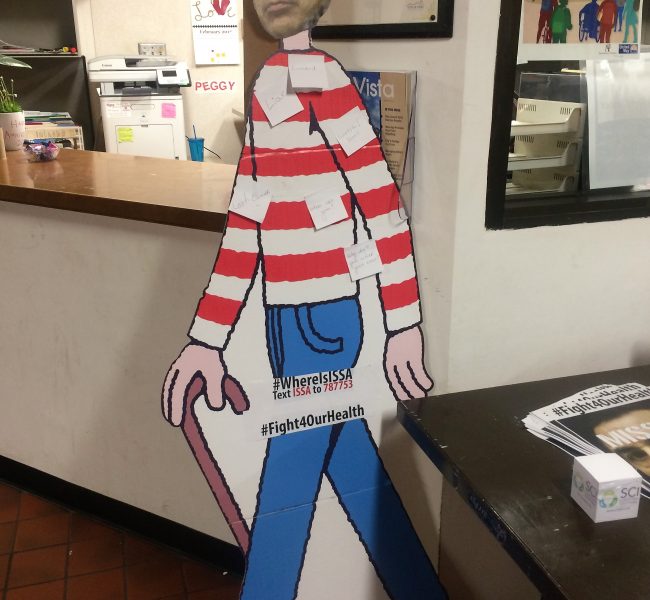 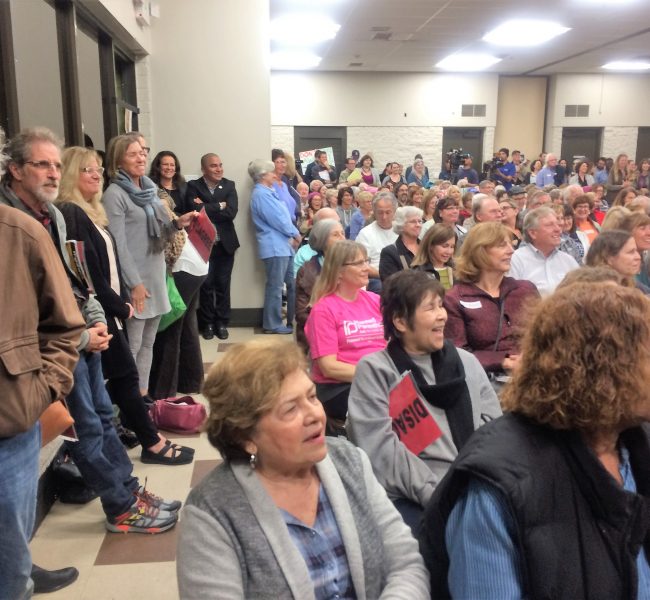 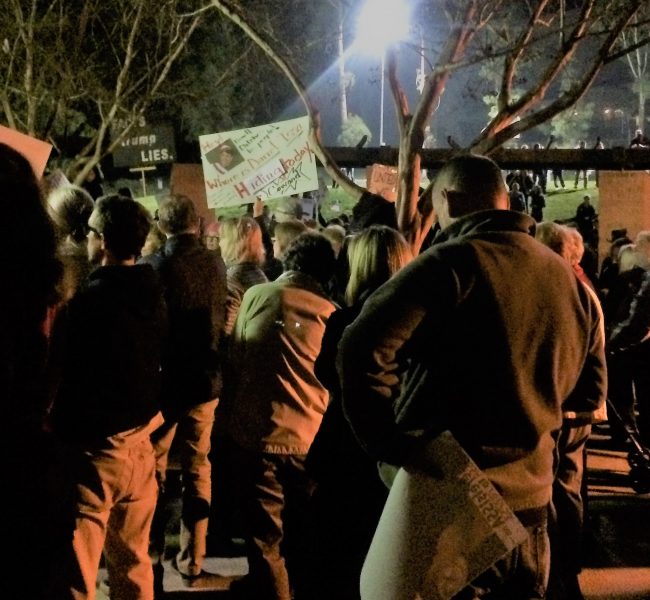 Numerous groups involved in the coalition say they just want dialog with their Congressional representative. They have concerns about what is going to happen with the Affordable Care Act commonly known as ACA or Obamacare. They believe certain actions in Washington constitute a reckless plan to repeal healthcare coverage and protections that exist with the ACA with no serious replacement. Some are also concerned about Immigration and recent Presidential Orders regarding deportation. They told me they just want Darrell Issa to listen to their concerns. 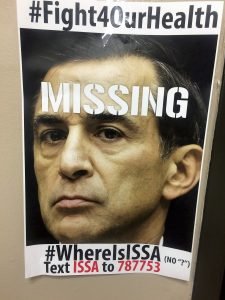 The auditorium was filled to capacity before 6 pm and a fire fighter was stationed at the door to turn away people that continued to arrive. Late comers were directed to overflow areas outside the building. A poster effigy of Issa was brought up on the stage and positioned in front of a microphone at 2 minutes before 6 pm. Imposed across his forehead were the words “MISSING”. His red and white striped shirt looked very similar to Waldo’s shirt.

The audience began chanting “where is Issa” at 6:04 and continued until 6:06. Signage proliferated the packed room. The signs being waved expressed many sentiments like; “Hands off Our Medicare”, “Indivisible Ocean Hills”, “Medicare for All”, “Save the EPA”, “We want to be Represented”, “I’m not Paid, But I Vote”,
Pam Hughes met me at the door and introduced me to Ellen Montanari who was pointed out to me as the person in charge of the meeting. Montanari had previously told everyone that the meeting would be peaceful and moderated by Reverend Beth Johnson from Vista’s Universalist church. Two schedules were planned for the evening. One plan if Darrell Issa were to show, and another plan if he does not show up. At 6:07 pm the meeting started with the “he did not show” plan.

Reverend Beth Johnson ascended to the stage and welcomed the attendees and commended their diversity saying, “The issue of health care is very interconnecting”. Reverend Johnson energized the crowd as she exclaimed, “We refuse to be silent”, “We will be together”, and “This is not a left – right issue. It’s a moral issue”. Green “APPROVE” signs and cheers rewarded her efforts.

Elected officials Esther Sanchez and Cipriano Vargas were attending the smooth running meeting. I hope they paid attention to the next speaker. Doctor Peter Grandall gave us statistics on the poverty rates in Vista and North County. I was surprised to learn that the poverty level in Vista is at 19.2 % and 31% of the people in poverty in Vista are children.

A worker came in from outside and after he whispered something to Reverend Johnson an announcement was made telling the assembly that there was another estimated 1000 people outside in the overflow areas. This caused an outburst of cheering before the next speaker, Sharon Hunt, took the microphone to tell us about her encounter with Congressman Issa earlier in the day. She was there when Darrell Issa came out of his Shadowridge office build to speak with protestors and supporters.

Approximately 80 people turned in cards asking to speak at tonight’s meeting. They were Health Care professionals, home care operators, nurses, doctors, insurance claims handlers, and concerned constituents. The crowd was far from being unruly. People exuberantly shouted and applauded at times but they let the speakers talk. The rules allowed the speakers only 2 minutes to speak and surprisingly, all of the speakers I heard adhered to the time limit.

After the first 4 speakers had delivered their messages, another announcement riveted everyone and created a chant of “This is democracy”. The crowd outside was now estimated at over 2000, almost ten times as many people as were sitting inside. Speakers were asked to shout into the microphone to allow the people outside to hear what was being said.

After hearing a couple more speakers I felt I had a sense of the topics and concerns. I now wanted to see what was happening outside. Exiting the front entrance I was reminded by doorway sentries that if I left the building I would be turned away if I tried to re-enter. As I stood at the top of the stairwell leading to the entry doors I saw several hundred people milling around on sidewalks that border the parking lot and go around the side of the building.

On the side of the building it was wall to wall people in the driveway and the large patio next to the auditorium. There was a buzz of conversation, more signage, but no unrest. Outside the low patio walls and going up the hillside towards the basketball courts were even more people. Moving onto the patio I could see the on-going meeting inside. People were straining to hear what was being said inside.

Back at the entrance I ran into Ellen Montanari as she was giving an interview to a cameraman. I overheard her tell him that she got involved in the movement because of her 22 year old son’s disappointment over the election. She wanted to show her son how to constructively address your dissatisfaction and how to make change possible. She is new to being a political activist but is apparently doing quite well at it.

I only had a couple of questions for Montanari. My first question was “Did the meeting come up to your expectations” and her quick reply was “Oh my! Not in my wildest…” To my next question of “Where do you go from here?” she gave me a confident smile and said, “We will continue to pressure Issa to just listen to his constituents”. Montanari went on to point out that Issa, in a January interview with the UT, had told the reporter that we need to get Washington to listen to our concerns and needs. She thinks Issa should take some of his own advice and listen to the voices in District 49.