Ray Huard …. Don’t take no for an answer and don’t let people say you can’t do anything.

That was the advice that U. S. Air Force Reserve pilot Jengi Martinez gave students during a recent career fair at Madison Middle School in the Vista Unified School District.

She was among dozens of professionals from a beekeeper and a body builder to a race car driver and a lawyer, who told the students how and why they got their jobs, and what their work entailed.

The idea behind the fair is to inspire kids and let them “see how many opportunities there are,” said Principal Susan Ford.

“This helps link what they’re doing in school with something in the future,” Ford said. “We’re spending a lot of time talking about careers. We have to. That’s the way to get students engaged in education.”

Seventh-grader Tess Moya made the rounds of several displays set up around the school courtyard, where students could talk to people in a variety of professions.

“I just like asking questions,” Tess said between talking with Martinez and heading over to a booth staffed by FBI agents.

“I’m thinking about doing something that involves action,” Tess said.

Classmate Nickolas Barbera said he’s already got a career in mind – becoming a firefighter like his father.

“I kind of want to follow in his footsteps,” Nickolas said. “It’s what I want to be when I grow up.”

Seventh-grader Yahaira Baroja said she was thinking about joining the Marines or becoming a nurse. 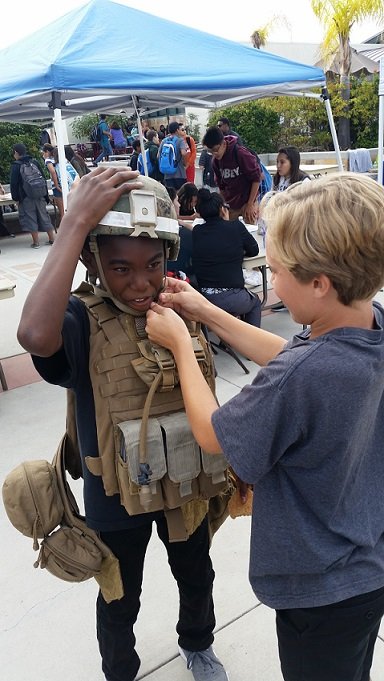 Neshawn Tyler and Kaleb Diehl trying on Marine gear at the fair.

“I like to help people and make them feel better,” Yahaira said.

Seventh-grader Holden Manno said he was thinking about becoming a Marine or a rap music artist.

Military service was a key career step for Crystal Salumbides, a lawyer in the San Diego County Public Defender’s Office who served in Iraq.

“I was one of those kids that kind of struggled. I knew what I wanted, but I didn’t know how to get it,” said Salumbides, who enlisted in the Army when she was 19.

Salumbides said she became a lawyer after serving as a paralegal in the U.S. Army JAG (Judge Advocate General) Corps and getting a law degree from Thomas Jefferson School of Law after she got out of the Army.

“There are a lot of things the military can offer,” Salumbides said. “There may be some people who need a little discipline and that’s what I got from it.”

But before recommending the military to students, Salumbides said, “I always want to know what their end goal is. If someone wants to do art, the military probably isn’t for them.”

Having a career fair for middle schoolers is a good idea because it gets them thinking about what they might want to do, she said.

“Granted, things will change,” Salumbides said. “The main thing is, they stay in school and finish their education. Then, the options will be open to them.”

Martinez, who flies huge C-17 cargo planes and is also a certified airplane accident investigator, said she wanted to be a pilot since she was 16 and saw the military as a way to reach her goal.

“Our humanitarian missions take us all over the world,” said Martinez, who’s also flown combat missions in Iraq and Afghanistan. “I’ve taken fire engines, trucks, you name it, we take it.” 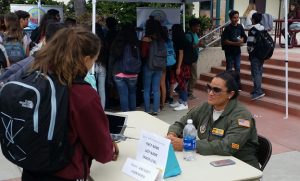 Martinez is particularly keen on encouraging girls to aim high in their career goals.

“Barriers are continuing to be broken,” Martinez said. “Surround yourself with people who are positive, who are goal oriented.”

Growing up in what he described as “a pretty trying neighborhood” in Chicago, Russell said, “I was told I wouldn’t make it, I wouldn’t amount to anything. I was going to be another statistic.”

After spending nine years in the Marines, Russell said he found a new career after going to film school in Los Angeles.

“My message to you is, if I did it despite all the challenges, I know all of you can do it,” Russell told the Madison students. “If I can do it, then you can do it.”

For those who might be considering a career in law enforcement, Jason Omundson, a crime prevention specialist with the San Diego County Sheriff’s Office, suggested that they might consider joining the Sheriff’s Explorer Program when they turn 16.

“It gives them the experience,” Omundson said. “They can go on ride-alongs with deputies. They wear the (Explorer) uniform. They go to a (training) academy, just like the deputies do.”

In addition to giving Madison’s 1,150 students insight into a wide range of careers, Ford said that the fair has given the school a valuable connection to the community.

“I think it’s energizing for presenters,” Ford said. “It’s something we want to continue. We don’t see any downside.”

NEXT ARTICLE →
It Will Soon be Brighter in Historic Downtown Vista