TR Robertson — Hidden in the northeast corner of Kit Carson Park in the Iris Sankey Arboretum in Escondido, California, is the only American sculpture garden created by French-American sculptor, painter, filmmaker and author Niki de Saint Phalle. The sculpture garden, called Queen Califia’s Magical Circle, is the third and last major project created by Saint Phalle before her death in 2002 at the age of 71. The sculpture garden was completely financed by Saint Phalle with land acquisition, site grading, landscaping, maintenance and operations initially donated by the City of Escondido.

The sculpture garden is part of a 12-acre habitat in Kit Carson Park and was opened on October 26, 2003. The garden is named after Califia, the fictional black Amazon warrior queen of the mythical island of California. Califia was introduced by 16th century poet Garcia Rodriguez de Montalvo in his epic novel Lasgergas de Esplandian (The Adventures of Esplandian) written in 1510. Saint Phalle was also inspired by reading about the legend in Assembling California, a book by Pulitzer Prize winning author John McPhee, whose book also describes the geologic history of the state. 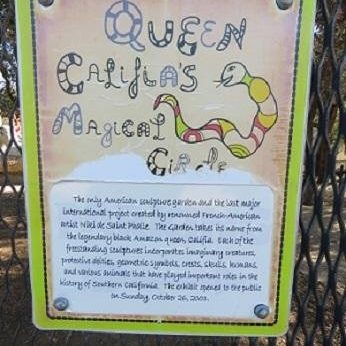 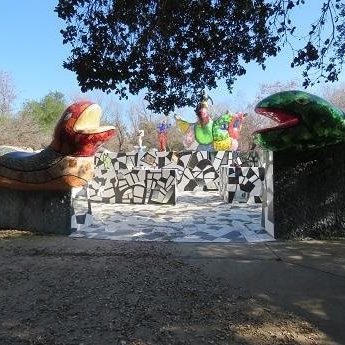 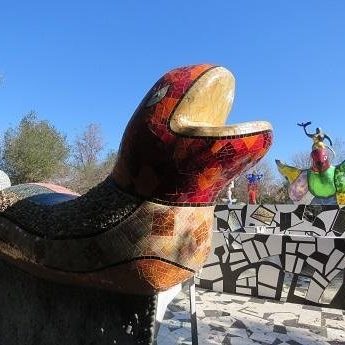 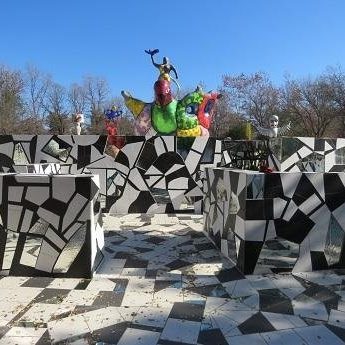 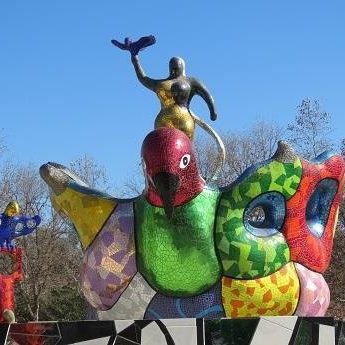 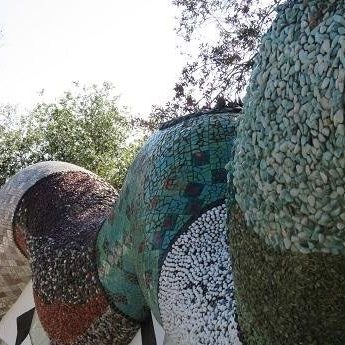 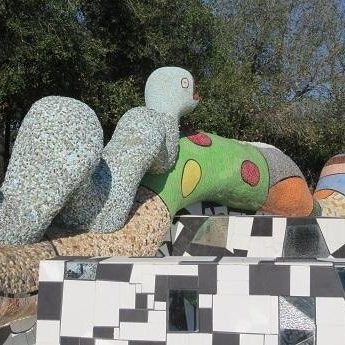 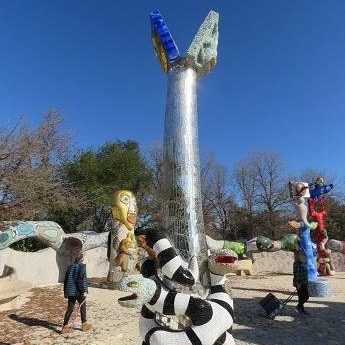 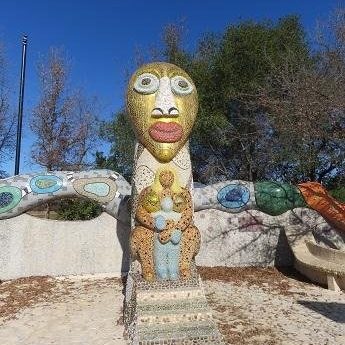 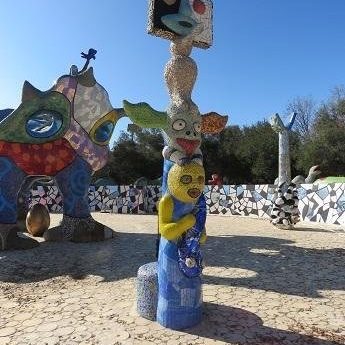 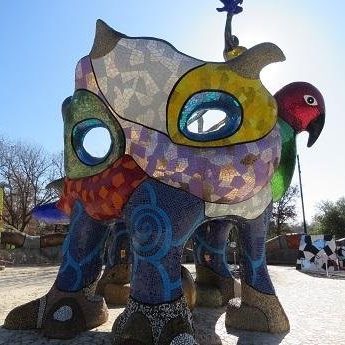 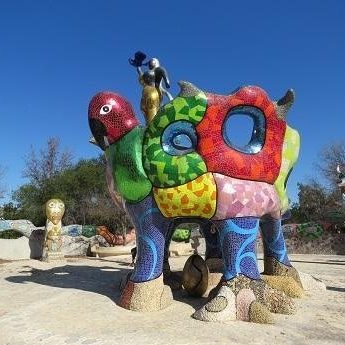 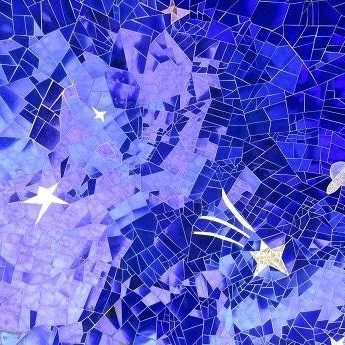 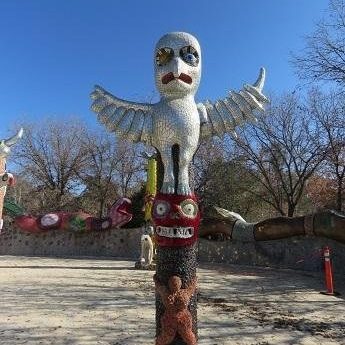 The Magical Circle is filled with nine large sculptures, a maze-like pathway entrance paved with black and white mosaic tiles and mirrors, all enclosed by a circular “snake wall” with native trees and shrubs planted on both sides of the plaza and the outer wall. Coastal Live Oaks, Valley Oaks, Canyon Oaks, California Sagebrush, Brush Poppy along with Prickly Pear and San Pedro Cactus are a few of the native plants and trees in the area.

Also incorporated in the plaza are three long benches featuring travertine marble and river rock. The “snake wall” measures 400 feet in length with height variations from 4 feet to 9 feet. The wall is covered with assorted colored glass, ceramic tiles, semi-precious stones and stone mosaics. Inside of the plaza, on the wall, can be found American rock art symbols and planetary forms and hearts as well as the handprints and signatures of the artist’s team and family members. The wall is built from polystyrene encased in urethane skin with an applied fiberglass coating over a steel armature. 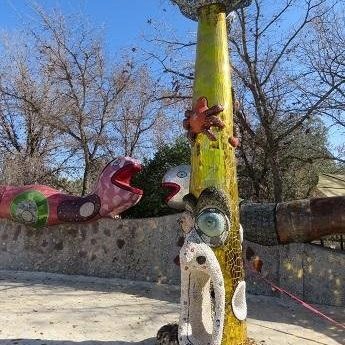 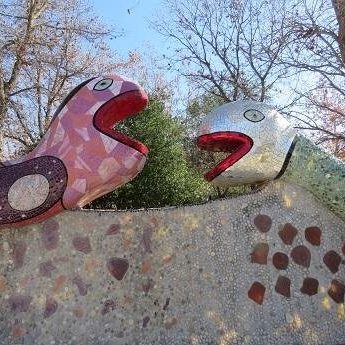 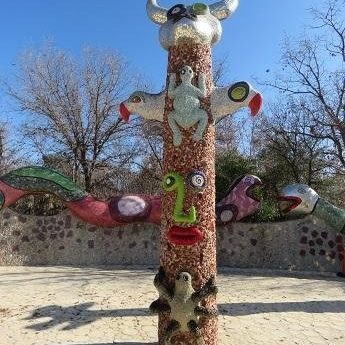 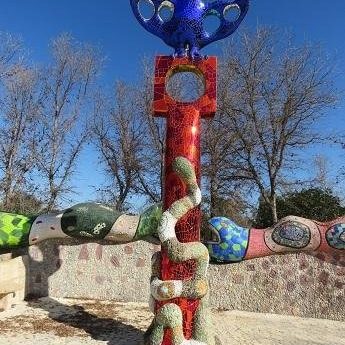 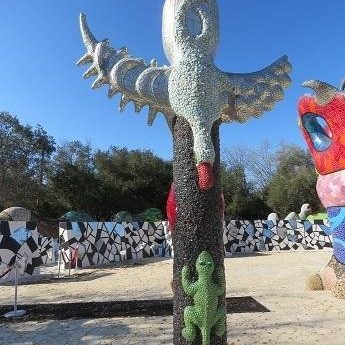 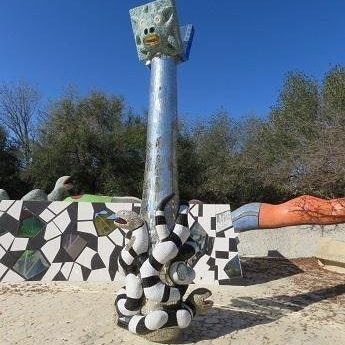 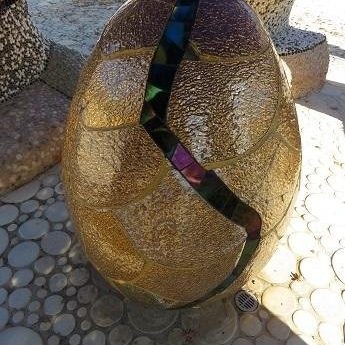 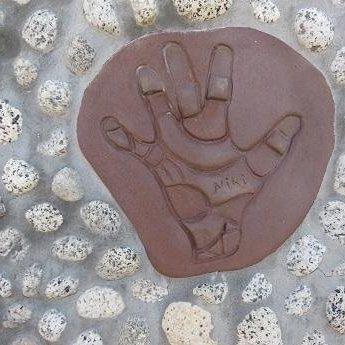 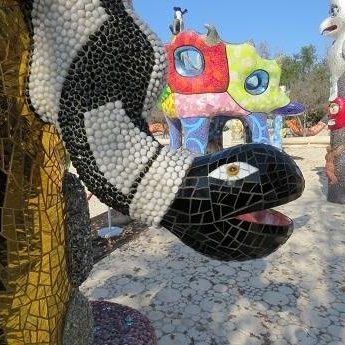 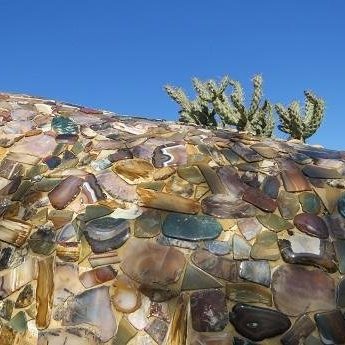 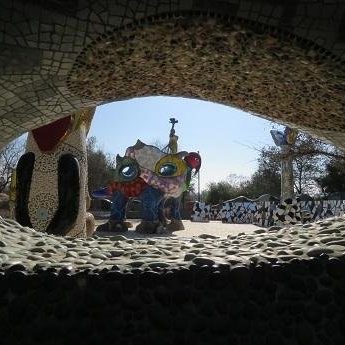 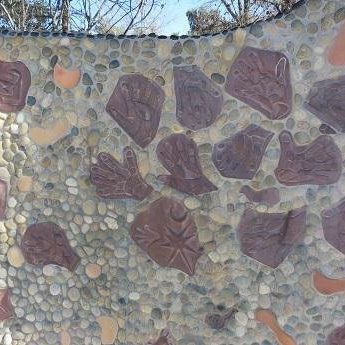 There are nine freestanding sculptures in the garden with symbols and forms freely drawn from Native American, Pre-Columbian and Mexican art as well as Saint Phalle’s own unusual imagery. The statues are also made in the same manner as the “snake wall”. The main center piece statue is named the Queen Califia and Eagle Throne and the Totem Figures are called Cathead Totem, Birdhead Totem, Yelling Man Totem, Bullhead Totem, Kingfisher Totem, Step Totem, Snake Totem and an Untitled Totem referred to as Bird on a Square. The massive Queen Califia and Eagle Throne measures 24 ft. x 22 ft. x 20 ft. and features a large golden egg fountain under the five-legged eagle. The fountain currently does not work due to damage from vandalism and the cost required for the repair of the fountain.

Niki de Saint Phalle was born in Neuilly-sur-Seine, France, and raised in New York City. She had a somewhat traumatic childhood, married early in life and had two children. She began an experimental style of artwork early in her career and was influenced by a number of artists, eventually embodying what was known as the “New Realists” style. Saint Phalle first became famous for her oversized, voluptuous female figures, the Nana’s, which are found in cities and museums around the world. Some of the large projects, other than Queen Califia’s Magical Circle, include the Stravinsky Fountain in Paris, The Grotto in Hanover, Germany, Noah’s Ark in Jerusalem, Israel, and the Tarot Garden in Garavicchio, Italy in southern Tuscany. Saint Phalle built a huge female figure, called The Empress, in the Tarot Garden she called home for many years.

Other than Queen Califia in Escondido, several other examples of Saint Phalle’s work can be found in San Diego County. The Sun God is next to the Faculty Club on the U.C.S.D. campus; Le poete et sa muse is in the Mingei International Museum on The Prado – Balboa Park, as is Nikigator; Coming Together is at the San Diego Convention Center; and Big Ganesh is in the San Diego Museum of Contemporary Art.

Saint Phalle was living in Paris until 1994 when poor health caused her to move to La Jolla, California. She was suffering from respiratory issues caused by exposure to the toxic fumes from Polyester materials used in her early sculptures. In a Press Release from the City of Escondido, Saint Phalle said, “California has been a rebirth for my soul and an earthquake for my eyes – sea, desert, mountains, wide open sky, brilliance of light and vastness of space. I have embraced another way of life and have let my discovery of this landscape manifest itself in my work”. The statues and other artistic pieces in Queen Califia attest to Saint Phalle’s love of this part of California. She remained active in planning, designing and construction of Queen Califia for three years until her death. Her team of artists completed her work under the instructions she left, for one additional year, until the completion and opening of the sculpture garden in 2003.

At the present time Queen Califia’s Magical Circle is maintained by a dedicated group of volunteers who donate hours of their time to work as docents and educate people about the sculpture garden. The Docent Volunteer Team is selected and trained to provide community awareness, information and local history on the Magical Circle and artist Niki de Saint Phalle. All work to repair damaged art pieces is done by professional restoration artists approved by the Niki Foundation. There has been damage done to the garden by vandalism, leading to the sculpture garden and surrounding trees being fenced off. The garden currently has a surveillance camera system on site connected to the Escondido Police Department.

Finding the sculpture garden is a little tricky. Once arriving at Kit Carson Park, directly across the street from San Pasqual High School, enter the main entrance for Kit Carson Park. Drive until the road dead ends, turn right and drive to Iris Sankey Magical Trail (look for small sign that says Queen Califia’s Magical Circle), turn left driving to the end of the parking lot. There will be a dirt trail at the end of the lot you will have to walk on to get to the garden (you can see the statues in the distance on the left side). This is another example of a hidden artistic gem in San Diego County that is worth the drive to see and enjoy.

Currently Queen Califia’s Magical Circle is open Tuesday and Thursday from 9 am until noon and the 2nd and 4th Saturdays of each month from 9 am until 2 pm. Private tours of groups of 8 or more can be arranged by calling 760-839-4000 or email dmlopez@escondido.org. Go to www.queencalifia.org for more information. 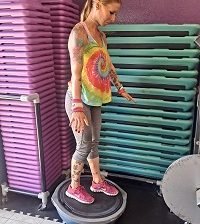 Healthy Community Healthy You – Body Balance: Control Of Your Frame