Warning: A non-numeric value encountered in /home/customer/www/thevistapress.com/public_html/wp-content/themes/dailypress/include/breadcrumbs.php on line 54
Calendar >  Forgiveness and Anger Inter-twined in Old Globe’s “The Blameless”

Forgiveness and Anger Inter-twined in Old Globe’s “The Blameless”

compelling, thought-provoking play which delves into the lives of the Garcia family members as they struggle to deal with a horrific occurrence in their life. “The Blameless” has as its core the problem of rising gun violence in the United States. Written by playwright, screenwriter and teaching artist Nick Gandiello, gun violence is a hot issue topic that quickly raises interest and feelings anytime it is brought up.

All of the action of the play takes place in the Garcia’s kitchen and begins with mom, Diana Garcia, played by Antoinette LaVecchia, and daughter, Theresa, played by Nataysha Rey, storming into the house having just come from Theresa’s school where she was suspended for getting a little too friendly with her boyfriend in a custodial closet. A lot of yelling, back and forth banter takes place as mom tries to decide what punishment she should administer and whether or not her husband should be told about the situation. This is a special, memorable day for the family as they are going to have dinner with a man they have not met, but know, and the humor of this situation will pass once we find out what has happened in the Garcia’s life and who the visitor is and why he is coming to dinner. 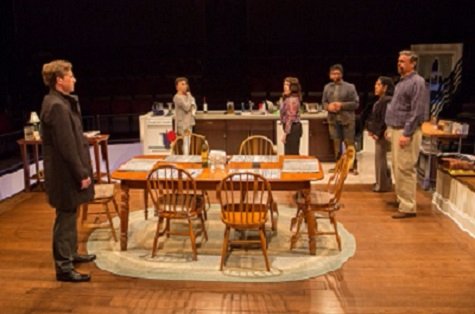 The cast of the world premiere of The Blameless, by Nick Gandiello, directed by Gaye Taylor Upchurch, Photos By Jim Cox

Father Alex, played by Frank Pando, arrives late, causing more tension with Diana, followed shortly by his sister, Amanda, played by Liza Colon-Zayas.  We slowly begin to find out what has gone on in the Garcia’s life and see that it revolves around their son, Jesse. A short while back, Jesse had been killed in a school shooting, along with 5 other students. At one point, Diana tries to clean-up the kitchen area, enlisting the help of Theresa, in going through papers involving different things Jesse was involved with. They try and categorize a keep and don’t keep pile, but memories will get the best of them. We are drawn into how each family member is dealing with this 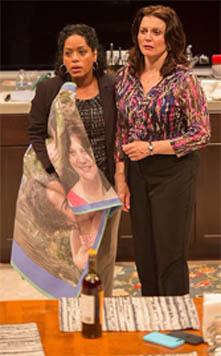 horrific situation. Diana has become involved with Mom’s Demand Action for Guns in America, Theresa is acting out and doesn’t understand why they must meet with the dinner visitor, Alex has yet to completely express his true feeling about what has happened and Amanda has many, many questions and is not afraid to ask them. We begin to find ourselves wondering just how we would handle the situation if we were ever thrown into such a horrible occurrence.

Then we find out who the dinner guest is. Soon to arrive will be Drew Davis, played by Stephen Barker, the father of Jacob Davis, the boy who shot the students. Drew has tried to meet with the other families, only to be turned down by all except the Garcia’s. Drew has actually given a T.V. interview “to offer insight into his family” and this has caused numerous reporters to swarm the Garcia home. Drew is not quite sure why he wants to have this meeting. He is a lost soul, has no reason to explain why his son did what he did and realizes he never really knew his son. To say he has no idea about why his son did this is not entirely true, as his life unfolds for us we hear many things that led Jacob to become the person that would commit such a horrific crime. Drew will climatically begin to see this through the actions of the Garcia family. 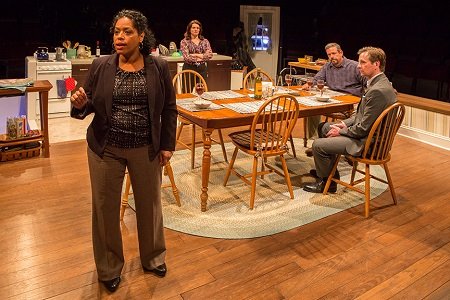 Needless to say, the dinner is tense, and everyone tries to express themselves in some way, looking for resolutions of some sort. Daughter Theresa asks, “Why did you come here” and Drew searches to try and find answers. Boyfriend Howard, ends up attending the dinner and in an earlier discussion finds out that Drew used to work as a lawyer for different music groups, including a rapper named Gravedigger, and Howard, played by Amara James Aja. Howard remarks that Gravedigger’s lyrics are extremely violent, to which Drew responds, “So is Shakespeare”, which is a whole other discussion that could take place.

No real answers can come out of the situation Nick Gandiello and director Gaye Taylor Upchurch take the audience through, but a life 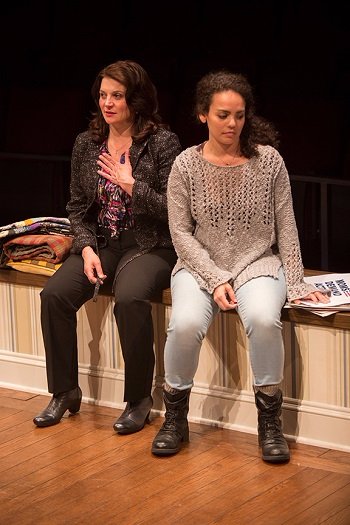 must go on attitude is shown through the power of the Garcia family. They have problems beyond the death of a son/brother, they yell, they cry, they laugh, they have ebbs and flows in their life. They act like many families would act in this same situation. Gaye Taylor Upchurch is returning to the Sheryl and Harvey White Theatre for the third time. Nick Gandiello runs workshops in playwriting and theatre business at several college campuses and is the Literary Manager of Young Playwrights Inc.

A tremendous, theatrically experienced cast did a masterful job in portraying the emotions surrounding this volatile experience. Several of the actors and actresses are performing at the Globe for the first time and several are award winning actors/actresses. Amara James Aja has performed in several Globe plays, Liza Colon-Zayas performed in world premieres of Pulitzer Prize winning plays, Antoinette LaVecchia has appeared on Broadway as has Frank Pando, Nataysha Rey is making her Globe debut and Stephen Barker has performed in numerous plays throughout the country and has many television credits.