Unveiling in Arts and Culture District

As all the guests and attendees gathered below the largest mural to now grace Downtown Historic Vista and the tallest mural in North County, everyone visited on the patio of the popular 508 Tavern patio enjoying Starbucks coffee and listening to the sounds of Quinn McCarthy playing on the patio stage. Tideline Partners founder Lev Gersham began the festivities with a short presentation about the process to build this complex in Vista and the process involved with bringing Joram Roukes, internationally acclaimed artist from the Netherlands, to Vista to paint a mural on the 60-ft. wall on the north side of the building. He thanked numerous people responsible for assisting with the completion of this project. 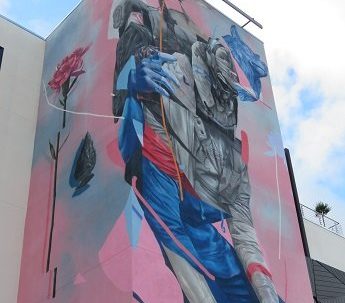 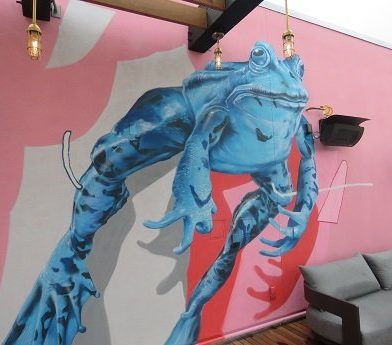 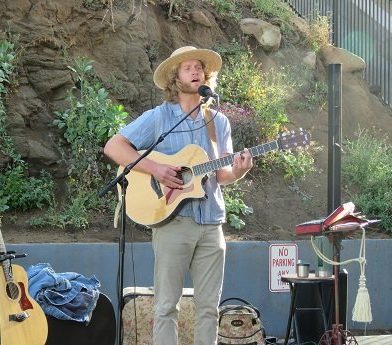 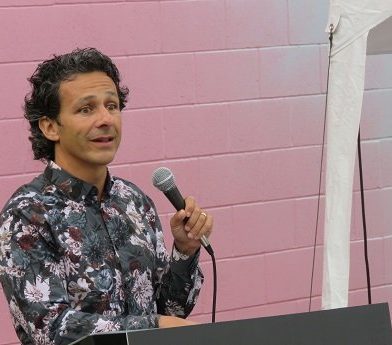 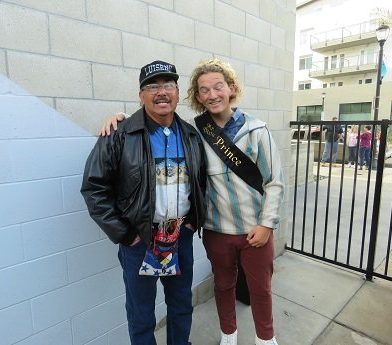 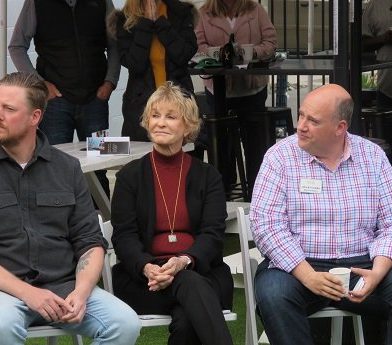 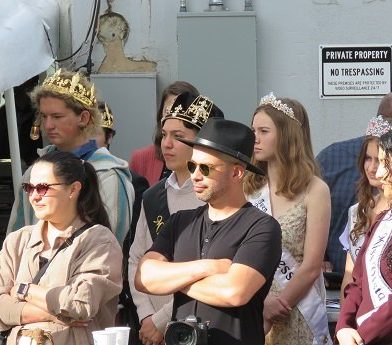 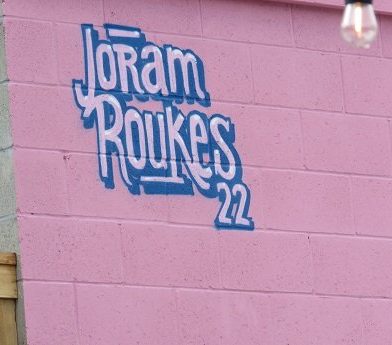 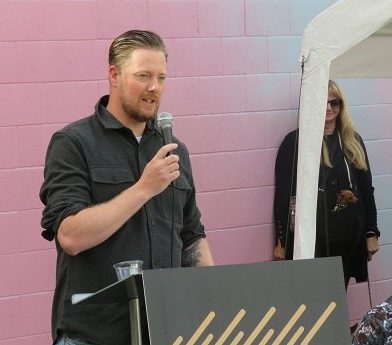 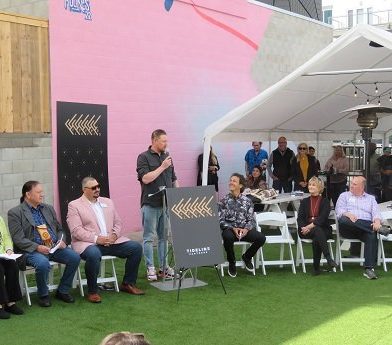 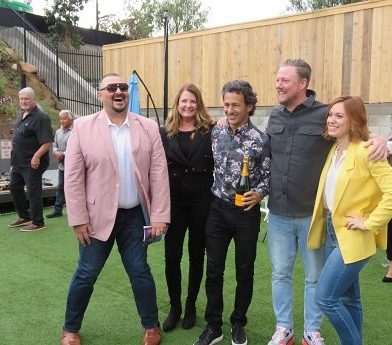 Lev did not want just any mural. He wanted a mural that spoke to the heritage of Vista’s past, a mural that would generate discussion about its significance, a mural that Vista would be proud of seeing when driving down the street. He said the process of accomplishing this was “an emotionally rewarding journey.”

Artist Joram Roukes was bought to Vista and tasked with the job of producing a design for the buildings mural that would accomplish the vision Lev had. Joram spoke about the journey he took as an artist to bring the design to fruition. He wanted to create a design that would speak to the cultural history of the Luiseno Indians that once lived throughout this area long ago. He also wanted the mural to cause people to deeply think about the meaning and story the mural told. The mural also had to be a design that the Vista City Council would accept for the downtown area. Along the way Joram also met with Tribal Council members of the San Luis Rey Band of Mission Indians to make sure he designed a mural that would honor their culture. The 60-ft. mural, now on the side wall off Found Lofts, is a result of this process Joram, Lev and all concerned went through. He said he hopes his personal journey to bring the mural to this project “continues for the residents that move in bringing them their own journey.” 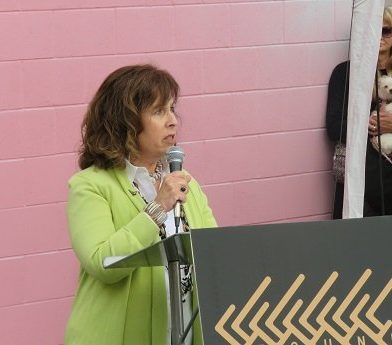 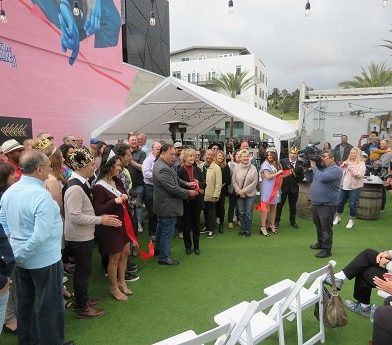 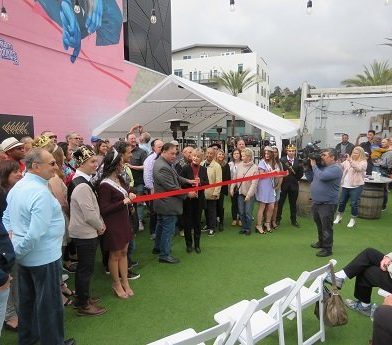 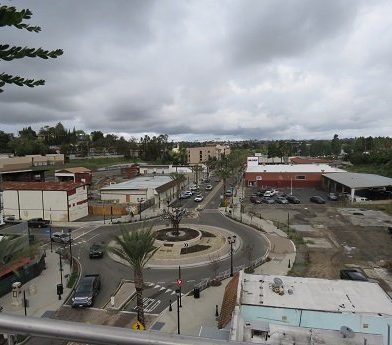 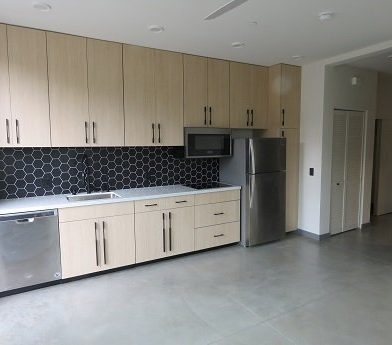 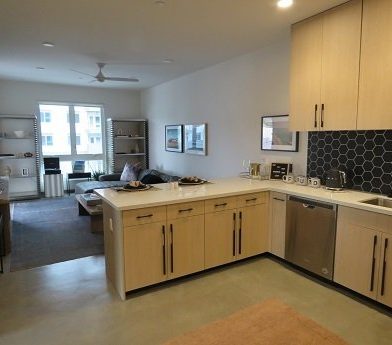 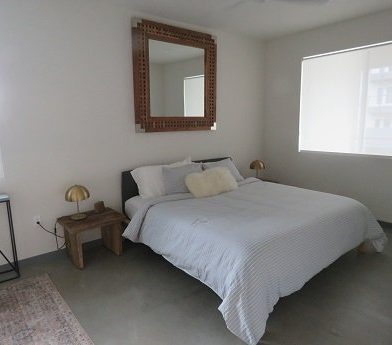 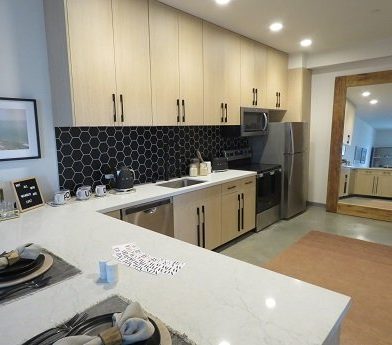 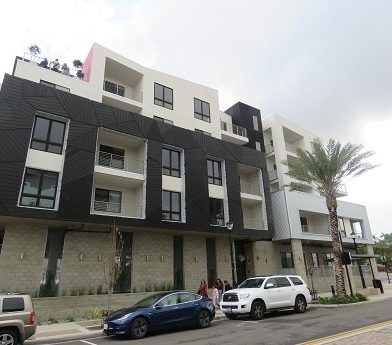 Joram has shown his artwork in galleries across the world. He is famous for his large-scale paintings with collage-like features, many centering on daily life and contemporary culture in western society.

On behalf of the City of Vista, Mayor Judy Ritter thanked those in attendance and congratulated Lev and Joram for the design and completion of the housing project and the artistic design on the building as well as bringing a welcomed addition to Vista’s Arts and Culture District.

Mel Vernon, Captain, San Luis Rey Band of Mission Indians, thanked Lev, Joram and the City officials of Vista for consideration of including them in the process of developing the mural. He said it was important to make sure the legacy of the history of past cultures continues and they are “proud to share as a gift to the people of Vista the story the mural brings with it.” Cathleen Chilcote Wallace told a story of the coyote and the frog, saying animal stories are significant traditions for all Native American cultures and tell stories that are important parts of life lessons. On the fifth floor Rooftop Deck wall, Joram painted a large design of the frog from the story Cathleen told.

Lev returned to the podium to thank once again those in attendance, the City of Vista for their cooperation in helping with the project, the Tribal Council members, Joram for his challenging work as well as Lev’s wife and his father. With this, everyone gathered in front of the Chamber of Commerce Red Ribbon for the official Ribbon Cutting and the opening of Found Lofts. Everyone was invited to explore Found Lofts and go into several of the staged apartments.

Found Lofts features 18 593 sq. ft. studios, 21 806 sq. ft. One-bedroom apartments., 3 1,331 sq. ft. Two-bedroom apartments. There are balconies off every unit and in-unit washer and dryers. The apartments have Whirlpool appliances and 9 ft. ceilings. Other features include a fifth floor Roof Deck with fire pit, BBQ and living plant wall. There are bicycle lockers with charging for e-bikes, a workshop for bike repairs and some covered and outdoor parking. Found Lofts is located at 516 S. Santa Fe. Ave.

← PREVIOUS ARTICLE
Notice Of Public Hearing Of The Zoning Administrator