TR Robertson — At a time when some relief is needed from the barrage of political rhetoric blasting over our T.V.’s, on the radio, in our mail, practically on every street corner and occasionally over the internet from our friends, the North Coast Repertory Theatre, in Solana Beach, has brought to the stage a hilarious political satire, “The Outsider” by Paul Slade Smith, perfect for a welcomed break from this bizarre world of politics.  This comedy is timely, extremely witty, wonderfully acted, non-stop funny and surprisingly uplifting. Every member of the cast is a stand-out and has the audience in stitches as the story of a man in politics rises to a position he doesn’t want only to eventually find out he’s pretty good at handling the chaos around him.

Playwright and actor Paul Slade Smith is an award winning accomplished actor having performed on Broadway, in U.S. National tours, and around the world. He won nine regional awards for his play “Unnecessary Farce”. His latest play, “The Outsider” was originally produced by Paper Mill Playhouse in 2018. NC Rep Artistic Director David Ellenstein directed this NC Rep production.

Ned Newley is a Lt. Governor, for an unnamed state, and has spent his time working on crunching numbers and producing in-depth studies of a variety of issues in which his state needs assistance. He is content hiding away in a dimly lit, windowless office buried in the bottom of the state capitol. One day Ned finds himself Governor of the state due to the resignation of the Governor, and his entire staff, after the Governor’s sexual scandal with the runner-up of a beauty contest. Not only is Ned the new Governor, but he only has one staff member, Dave Riley, his Chief of Staff. Dave has also hired Paige Caldwell as a political consultant. Dave feels Ned needs all the help he can get as a possible special election may be held, especially after Ned was interviewed on T.V., after his appointment, and things went horribly bad. Ned hates speaking in public, is not good when meeting new people, looks more like a man who might be selling used cars, mumbles incoherently when he gets nervous and tends to stick his foot in his mouth. Paige has recently been contacted by Arthur Vance, a CNN political analyst, who seems to think Ned is the perfect everyman that has a chance in rising further in the political world with his seemingly bumbling, down-home behavior. Arthur is over-the-top driven to make Ned Newley a house-hold name and possibly someone who could rise to fame at a national level. Making things even worse for the new Governor and Dave is the office temp Dave arranged to help with answering the phones. The new temp, Louise Peakes, is about as inept, but incredibly funny, a secretary as a person could possibly have working for them. Without giving too much away, Louise will even find herself in the political world beyond her temp job, even though she doesn’t realize fully what is going on. Also adding to the Governor’s problems is a second television interview Arthur has set-up with local reporter, Rachel Parsons and her cameraman, A.C. Petersen. Naive, nervous, optimistic Dave finds himself attracted to the pushy Rachel, even though she is on the news side of things, a side most politicians find hard to deal with. With all of this going on things are set for a completely, hilarious, slap-stick ending, but one that makes you think about the true purpose of government and those that are in charge of these political positions.

Playing the common man, looks like anybody Lt. Governor, now Governor, Ned Newley, is John Seibert, making his NC Rep debut. John is from Detroit, an accomplished theatre and television actor and a full-time lecturer in theatre arts at Eastern Michigan University. John is a perfect fit for the soft spoken, bumbling, gentle Ned. He mixes in a wonderful display of physical humor with perfect timing as Ned anguishes over the least little thing, especially meeting people and being on T.V.. Playing Ned’s agitated, high strung Chief of Staff, Dave Riley, is the current Associate Artistic Director of North Coast Rep, Christopher M. Williams. As Dave, Chris brings just the right amount of anguish and tension to his role as the man chosen to be the only staff member Ned has and Chris’s encounters with temp Louise are drop-dead funny.

Shana Wride plays political consultant Paige Caldwell. She has been in numerous regional theatre productions and a recipient of a San Diego Critics Circle Craig Noel Award for her solo performance in “2.5 Minute Ride” at Diversionary Theatre and as Amanda in Cygnet Theatre’s “Private Lives”. Paige is concerned about the new Governor’s chances to succeed and just how much Dave can help him, but she finds inspiration when Arthur Vance arrives on the scene. Playing Arthur Vance is Louis Lotorto. Louis has been in a number of NC Rep productions, most recently as Emperor Joseph II in “Amadeus”. As the high strung, energetic CNN political analyst Arthur Vance, Louis is brilliantly all over the place on the set, enthusiastically encouraging first Ned, then Louise, in their political pursuits. The scenes with Ned and the four cards he is to read during the T.V. interview and the scene with Louise and the color code cards for her T.V. interview are classics.

As funny as this group of actors is, perhaps the standout performance is from Jacque Wilke as the ditsy, loud, equally bumbling office temp Louise. Jacque is brilliantly hilarious from the moment she arrives on stage to introduce herself to Ned and Dave, to the moment she leaves the stage at the end of the comedy. She is quick and her timing is wonderful and as mentioned her color code card scene with Arthur is absolutely amazing.

The remaining cast members include Natalie Storrs as the pushy, risk taking television reporter Rachel Parsons and Max Macke as the television cameraman A.C. Petersen, a man of few words except when absolutely needed. Both of these cast members are veteran regional theatre performers and have been in several NC Rep productions.

This satire does raise some key questions about the overall purpose of politics. Just how much do politicians lie and manipulate the facts to influence voters? What do politicians truly feel about the mass of their constituents? Are politicians more concerned about retaining their positions than actually making meaningful changes in government and laws that effect the mass of people? What is the overall role of the media in getting to the truth and how much are they influenced by politicians? Cameraman A.C. asks, “What does politics have to do with real life?”

The satire is a funny, thought provoking look at a variety of political issues and absolutely timely in today’s political world, both relating to those seeking office and those currently in office. This is a definite “should not miss” production. “The Outsider” will be on stage at North Coast Repertory Theatre in Solana Beach until March 22nd. For tickets go to www.northcoastrep.org or call 858-481-1055. Next up for NC Rep is “The Homecoming” by Harold Pinter beginning on April 8th.

NEXT ARTICLE →
“Lend Me A Tenor” At Star Theatre 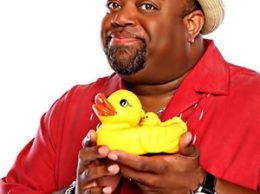