Warning: A non-numeric value encountered in /home/customer/www/thevistapress.com/public_html/wp-content/themes/dailypress/include/breadcrumbs.php on line 54
Calendar >  “Jitney” at Old Globe is Worth Multiple Standing Ovations

“Jitney” at Old Globe is Worth Multiple Standing Ovations

TR Robertson — The Old Globe presentation of the August Wilson play “Jitney” is a powerful, realistic, dynamic, gripping, emotional play performed by an exceptional cast of professional actors. “Jitney” is the eighth play in Wilson’s “Pittsburgh Cycle” of ten plays, most of which center around stories covering decades of life in the Pittsburgh Hill District. August Wilson was a Pulitzer Prize winning playwright and “Jitney” was awarded Drama Desk Awards, OBIE Awards, Outer Critics Circle Awards and Drama Critics’ Circle Awards in 2000 and a 2017 Tony Award for Best Revival of a Play. Wilson was also awarded two Pulitzer Prizes for Drama.

As the audience enters the Old Globe Theatre Donald and Darlene Shiley Stage the first thing to strike you is the amazing and authentic set created by Tony nominated Director Ruben Santiago-Hudson and Tony nominated Scenic Designer David Gallo. You are mesmerized as you try to take in the details of what is supposed to be the offices of the Jitney drivers. Jitneys, in Pittsburgh in the 70’s, were unlicensed cabs, the forerunners of today’s licensed ubers, offering low cost fares to various locations. White-owned cab companies in the Pittsburgh were very hesitant to take fares to and from black communities, so the Jitney’s were started to help out the community. This Jitney office was once a beauty salon, a barbershop and a butcher shop. Remnants of the former owners are subtlety scattered around the office as well as a plethora of items the current residents have brought in. Old calendars hang on the walls as well as numerous pictures. A pay phone hangs on the wall that is used often by those in the office. The large leather or Naugahyde couch is also a central part of the set and a frequently used piece of furniture. Thru the windows an old car can be seen, representing the various cars used by the drivers, all referred to by color. 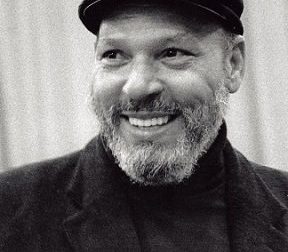 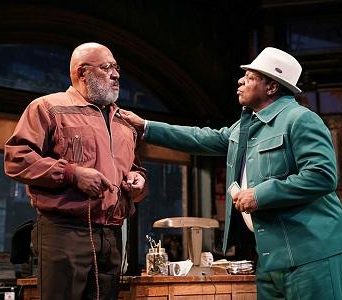 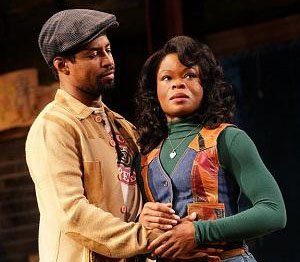 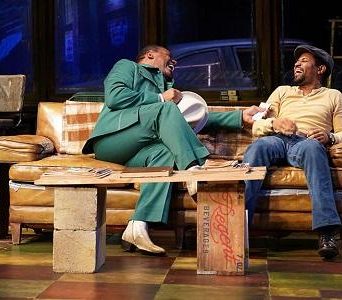 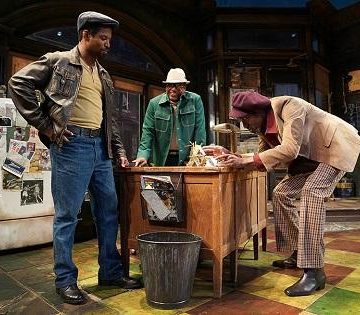 The story of “Jitney” is a simple, yet highly emotional one. A group of various aged black men put in long hours as they rotate answering phone calls and picking up local citizens to take them shopping or to work or wherever they need a quick ride. Cost ranges from a couple of dollars to around six dollars. Some of these men have been doing this for quite a while and several are fairly new to the job. Each man has a story to tell and as the play progresses we hear a great deal about each man. Some are married, some not and some thinking about marriage. One thing is clear, each has or had a dream and feel this job is or was a step to the dream. We find out about a challenging situation Jim Becker has when we learn his son will soon be released from prison. Becker has worked for years in a mill, recently stepping down and is currently the manager of the Jitney group. He and his son have a strained relationship due to the nature of his son’s crime. Along with this, two of the Jitney drivers have a rough encounter leading them to a tense relationship. To make matters worse the city of Pittsburgh is encroaching on the Hill District and has plans to close down and board up many of the businesses, turning some into hotels and other projects. The Jitney office and block has just come on the list of closures. All of this will come to a sudden emotional climax that will change the lives of most of the drivers.

All of the cast members have been in one or more of previous August Wilson plays. Five of the actors, Harvy Blanks, Brian D. Coats, Anthony Chisholm, Keith Randolph Smith and Ray Anthony Thomas, were in “Jitney” on Broadway. The entire cast at The Globe is currently on a national tour of “Jitney”, having performed in Detroit, Washington, D.C., Los Angeles, now in San Diego and heading to Seattle. This is a stellar cast that brings life to the turbulent lives of these men and the one woman we meet.

Playing Becker is Steven Anthony Jones and playing his son Clarence (Booster) is Francois Battiste. Battiste and Jones have an incredibly powerful and emotional scene at the end of Act I as Becker and Booster argue about his son’s crime, the past he threw away and what the future holds for him. The audience is “dumb struck” in silence as the lights go down on Act I.

Playing the likeable peacemaker Doub is Keith Randolph Smith. The talkative, always in your business Turnbo is played by Ray Anthony Thomas. Receiving the brunt of most of Turnbo’s comments is the youngest of the Jitney’s, Amari Cheatom as Youngblood. Cheatom and Thomas also have a very emotional encounter when things rise to a boiling point between them. Tony Award nominee Anthony Chisholm plays Fielding, the Jitney who drinks most of the time, much to Becker’s anger. Harvy Blanks plays Shealy, the colorfully dressed gentleman who uses the phone in the Jitney office as his personal booking office for his numbers game. Brian Coats plays Philmore, one of the regular customers of the Jitney group. The final cast member is Nija Okoro who plays Youngblood’s girlfriend, Rena, who just wants to make something of herself, provide for her son and someday move out of the area of Pittsburgh they now live.

There are numerous insightful moments in this play as we watch the daily struggles these men go through to make a living and just get by. Through the young couple we watch the dreams and aspirations of individuals trying to get out of a life they were born into. After a tragic moment in Act II, one member of the group describes his feeling about his friend’s death by saying, “He deserved better than what life gave him.” The same could be said about all of these people. Henry David Thoreau said, “The mass of men lead lives of quiet desperation”. Not quite the same statement, but close enough, Becker says to several of the men, “You look up one day and all you got left is what you ain’t spent”. The Jitney drivers are quietly struggling along, barely scratching by, trying to stay out of trouble, many suffering thru the same pains and agonies people a little more fortunate than them go thru.

This is a must see play, maybe one of the best in the “Pittsburgh Cycle” and the cast is one of the best you will be fortunate to see at The Old Globe. “Jitney” will be at The Globe Theatre, Donald and Darlene Shiley Stage until February 23. Tickets can be purchased at 619-234-5623 or go to www.TheOldGlobe.org.

NEXT ARTICLE →
“Murder For Two” At New Village Arts

Old Globe -It’s The Grinchiest Time Of The Year!