TR Robertson –Current city Councilman and Deputy Mayor John Franklin has announced his candidacy for Vista May as current Mayor Judy Ritter has announced she is not running for re-election and has endorsed Franklin for the office. John is deeply concerned about several issues and the direction the city needs to take to.

He feels that during the eight years he has been on the city council the city has come a long way. John is proud of the financial turn-around the city has gone through, especially since he was originally elected, prior to this the city had gone through seven straight years of deficit spending with almost non-existent savings for the city. He is proud that today the city has an emergency reserve fund equal to 35% of its annual budget, ensuring the city will be able to provide critical services without layoffs or pay reductions during future recessions. John feels that during his 8 years on the council, Vista has developed a clear forward-looking approach. He points out the growth of businesses, even during the last 2 COVID years, the improvement and look of the streets around the Historic Downtown Vista area, the increase in parks in the city.

John said with the issues the city will be facing over the next few years, he did not see anyone else running that could provide the leadership and knowledge he has and feels he is the best candidate for the office of Mayor of the City of Vista. He adamantly opposes raising the sales tax in the city, something some have called for. “Just like our families and businesses, government must also live within its means. In some California cities the sales tax is 2% higher than it is here. That’s not the future I want for Vista.” John said a high sales tax hurts working families. He also opposes the SANDAG Vehicle Mileage Tax proposal. His response was, “Vista’s Mayor serves as our representative on SANDAG, and will cast Vista’s vote for or against a per mile tax that will crush working families if approved. Fighting for working families is a calling that I cannot fail to answer.”

As Mayor, John said he would continue to work on traffic flow issues in the city and the council has already been active in working on the traffic light coordination, especially in peak traffic hours, to allow cars to “Get Home Safer & Faster.” He stressed the need to hold builders accountable to leave our city’s traffic infrastructure better than they found it by contributing to improving the grade of area intersections. “New development must demonstrate that it leaves our city’s roads working better than before, not worse.”

He stressed that the most critical issue facing the city is the rise in the Homeless in Vista and throughout California. John said he has a passion for working to address the causes and symptoms of the homelessness crisis in our community. He frequently visits homeless camps and shelters and speaks with individuals on the streets to better understand where the problem begins and how to implement more effective solutions to help the homeless. On the council, he led the effort to develop the city’s Homelessness Strategic Plan, which included acquiring additional shelter beds, hiring the city’s first social worker, and a number of additional tactics to address homelessness. Of the 427 homeless he interviewed only 54 accepted an offer to go to a shelter. It is his feeling, after interacting with so many existing outside of shelters and on the streets, that severe mental illness issues are the significant driving factor in unwillingness to accept assistance. He stressed that simply offering more services alone will not solve the problem. He says many of those on the street do not have the ability to make rational decisions to protect themselves and our current laws are not making it any easier to move individuals into safer environments. For several years now, he has been a vocal advocate for reform of California’s Lanterman–Petris–Short (LPS) Act which governs mental health conservatorship. Drug addiction, he points out, is classified as mental illness by the American Psychiatric Association and the majority of those suffering homeless on our streets are also suffering from addiction. The City of Vista provides shelter services and drug rehabilitation services through organizations like Catholic Charities’ La Posada and Interfaith’s Haven and Exodus Mental Health, but those services only help those who will voluntarily accept them. Anosognosia, is something he says all citizens should be aware of. It is Latin for, “to not know a disease,” meaning that the patient is unaware that they suffer from disease and would benefit from treatment. He made very clear that he supports every homeless individual’s civil right, noting that current California law provides the assistance of an attorney as well as a patient advocate and the diagnosis of a psychiatrist in the conservatorship process and a due process hearing before a judge. “I will always vigorously defend every citizen’s constitutional right to life, liberty and due process of law, but when a person’s mental health unquestionably inhibits their ability to make good decisions for their own health and welfare, society must provide humane solutions to provide treatment for mental illness and drug addiction and basic shelter needs.”

John pointed out he cast the deciding vote to approve the Vista Crisis Stabilization Unit which opened last year in Vista and provides acute mental health services for those who may be a danger to themselves or others. He negotiated the addition of an additional sheriffs’ deputy for the city as part of the agreement with the County of San Diego.

While he supports Vista funding low barrier shelters for those who suffer from addiction, which includes La Posada and Haven House, he emphatically opposes the Harm Reduction model for shelters which provides drug paraphernalia, and in some instances supervised drug use. “There is a fine line between providing the services necessary to help addicts, and policies which arguably promote self-destructive behavior. We have a choice to make between continued funding for sober living shelters for those families seeking a sober environment, many with small children, and between eliminating funding for those facilities. We must also take a strong stand against the Harm Reduction model which crosses the line into enabling destructive behavior. We must continue to outreach to addicts, provide them shelter opportunities and rehabilitation opportunities, but we must also take a strong stand against enabling drug use.”

John Franklin said, “I want to fight for the community I love. I came to Vista in 2009, met my future wife here in 2011 and married in 2012 and I want to continue to fight for morally imperative solutions to problems like homelessness, to eliminate blight and continue to beautify our neighborhoods, and I will continue to fight for a crime-free community. I want to protect Vista’s future. A Safer, Cleaner Vista remains my number one priority.” For more information go to www.johnfranklin.org or call 760-689-2220.

NEXT ARTICLE →
Cipriano Vargas Announces Candidacy for Mayor of Vista 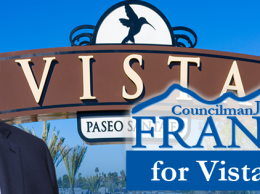 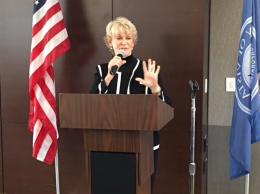 Vista’s State of the City Looks Better than Ever