Vista, CA –Since June 2020 Lighthouse Players has been leading the way by being innovators of keeping Arts alive and safe! When the pandemic hit Lighthouse Players discerned how to preserve the performing arts with their Tribe of professional and emerging artists as well as through their Arts Education programming.

The first step was a Virtually streamed Cabaret with performers safely on the same side of the screen so patrons could view the same side of the stage event from their homes. Patrons were filled with gratitude and joy and although the event was successful the longer the pandemic went on, the more patrons were craving live in person performances as that is what live music and theatre is- the magic created in the same space between performer and patron. Performers also were feeling their spark dim by
not being able to perform in person which many have spent their lives passionately pursuing. This is when Artistic Directors Noelle Marie and Ben Williams knew they needed to find a safe solution. After attending
a month’s worth of their Drive Up church services and speaking with their and other church Administrators they knew Drive Ups could work for the Arts as well!

July 2020 – current 2021 season Lighthouse Players has been producing Drive Up Cabarets for the community. Patrons had the option of sitting in their cars with windows rolled down a parking spot apart, tailgating, or bringing their lawn chairs safely distanced and designated by cones across the lawn. Temperatures were checked as Patrons pulled into the parking lot and there was a flex arrival time and curtain to ensure safety including no intermission or concessions to prevent crowding. Restrooms were to
be used prior and after and everyone must wear masks when within 6 ft. of people outside of their party. Performers sang over 20 ft. from patrons well over the recommended 3 meters and were socially distanced from one another and the team.

June 2020 began with Virtual Broadway Duets and a side by side virtual video streamed after the live event. “Thank you for bringing the joy of music into my living room!” – Cindy James, Patron

July 2020 was a revisit to the Summer Composer Cabaret Series with The Music of Jason Robert Brown. “I had a great experience with the drive up cabaret. I love the comfort of watching from the car and being able to eat and drink in there, haha. I thought the talent was great too! Great songs and
voices to go with.” Josh Savage, Angels Tribe Donor/Patron

August 2020 continued the Composer Series with The Music of Leonard Bernstein. “I love being trained to take stage with professional adults, everyone is so kind, while giving more opportunities to sing at a higher level.” Kaileya Quindoy Student Tribe Artist / Voice student of Artistic Director Noelle Marie.

September 2020 brought us Songs of the Silver Screen. “I could feel the spirit in your [the Directors] beautiful duet and from the moment the Cabaret music began I realized how much I missed performing and by the 3rd song I was filled with tears just to be around live music. I am so thankful to be able to perform with you all next month and I completely trust my kids with Lighthouse Players!” Wendy Pendergrass, Tribe Artist/Parent/Patron

October 2020 concluded Season 2020 of Drive Up Cabarets with Broadway Villains just in time for Halloween! This event added more acting with short monologues leading into each song as Tribe Artists became their characters. “I am so lucky to be involved in an Arts Organization as incredible as
Lighthouse Players. As both a performer and staff member, I have had the privilege of working alongside so many amazing and talented Artists who have helped me grow in every area of my craft.

More importantly, Lighthouse Players is a community where I truly belong. In my entire artistic career, I have never felt more at home. ” Jonathan Edzant, Tribe Artist/Head Photographer, Webmaster.

Lighthouse Players strives to produce high caliber art with a focus on storytelling. Colleagues appreciate the opportunities to perform, especially currently during a pandemic, while giving back to Arts Education. The Tribe services patrons and pulls from performers in San Diego, Orange and LA Counties in addition to the Inland Empire.

December 2020 surprised us all with the ongoing pandemic. Lighthouse Players knew their vision of being a light in the community meant a responsibility to care of the overall health of people which includes their emotional, mental, and spiritual while in the safest way possible for their physical health. As a lighthouse does not keep its light on simply awaiting a return, Lighthouse Players continue to shine their light as a guide during the storm. Christmas 2020 was no different as the Tribe took stage for an Outdoor Live Radio Play of It’s A Wonderful Life, a classic 40’s Christmas story of hope, purpose, and redemption.

A Saturday matinee was performed socially distanced with similar safety protocols as the Drive Up Cabarets. “It is such a blessing to be able to perform with the Tribe currently and I am incredibly thankful for our Artistic Directors!” Ashlyn Miller, Tribe Artist.

Arts Education:
November 2020 concluded the Fall Session for Lighthouse Players Youth with their Class Showcase of Charlie and the Chocolate Factory which was performed as a Drive Up in the same fashion as the Cabarets. Students had the training opportunity of taking stage with four of our professional adults
which was a joy for all. Lighthouse Players has successfully completed both in person and virtual classes and camps. Both parents and students alike could not be more thrilled to have their spirits lifted and skills honed through the training they received. “A-M-A-Z-I-N-G Camps!!! My daughter has been lucky to participate in two of your camps (Harry Potter and Inside Out). With 3 of my kids doing various camps in these COVID Zoom days, I have a good sense of what a good camp/class and what a not so good
camp/class are like and as my title says… your camps are A-M-A-Z-I-N-G!! You are so well organized, do a variety of interesting activities, are so comfortable with Zoom and keeping all of the kids engaged, and overall just kind and attentive. I am so grateful to your two wonderful instructors on giving my daughter two magical weeks! Thank you!!!!!!!!” Olympian Jonathan Ohayon, Parent

Fall of 2019 Lighthouse Players’ Arts At School program was launched at Madison Middle School who became the model school receiving a Title I Grant through Vista Unified School District with the help and guidance of Principal Steve Bailey. ” The Lighthouse Players Musical Theatre program has had a significant impact on supporting our core ELA program and the four C’s of the Common Core. We are honored to be a model school and would encourage other schools to make use of their Title I funds to
bring in Musical Theatre to their schools.”

Lighthouse Players vision is to be a Tribe of guiding lights in the Arts Community with a mission of a community of Artists who equip all ages & strive for excellence by telling great stories when creating Art while embracing identities and values. Founded by Noelle Marie and Ben Williams, two friends who are Arts Professionals, with a similar vision for the arts, a heart for people, and shared values, who saw the need for a liberating arts organization in their community. Together they are creating a space which is safe while encouraging of risks, nurturing while empowering, and positive while remaining true to the art form
and the stories brought to life.

Lighthouse Players began producing Cabarets and Dinner Theatre Cabarets
in May of 2018, a total of 7 by Christmas 2019. Artistic Directors Noelle and Ben immersed themselves in writing original scripts, February brought Valentine Mystery at the Speakeasy and Journey Through Oz Immersive Theatre in wicked timing for Halloween. The year was also filled with music including an Irish Cabaret for St. Patrick’s Day and the Summer Composer Cabaret Series with the first four Composing teams celebrated. Last Christmas the Tribe stepped into the wintery magical land of Narnia with a Live Radio Play of The Lion, the Witch, and the Wardrobe. Both years consisted of Musical Theatre classes and camps for youth each quarter.

2021 will be filled with music and theatre producing full Musical Theatre
productions and more Cabarets where the Tribe began. “The Artistic Directors are always kind, encouraging and understanding. That’s why we are all there. We like that they do quality work but the added bonus (times 100) is that we know they are not doing anything but being uplifting and
supportive. That’s why I’m there, driving from Temecula! I feel like I have a safe place to practice my art and intermingle with others who are looking for the same. It’s going to be, and has been, very healing – so my thanks to both Noelle and Ben!” Elizabeth Langlois, Tribe Artist.

Lighthouse Players is proud to present the 2021 Season with 3 Drive Up Cabarets, a Drive Up Concert, and 2 full Musical Theatre Productions:

In a Time Without Theatre For Now, What is Your Favorite Musical of All Time? 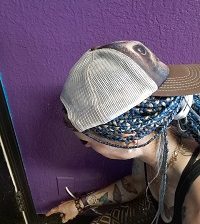