“North Coast Rep continues to blow us away with storytelling mastery,” in the streaming one man show, ‘Dr. Glas.’”

“Do not let this tremendous performance of the World Premiere of this play pass you by as Daniel Gerroll brings a passionate and emotional performance to the NC Rep stage.” – TR Robertson, The Vista Press

“The result is a taut psychological crime story, well directed, with a potent and convincing performance and a smooth, seamless production.'” – Pat Launer, Times of San Diego

“A riveting psychological thriller, and a perfect vehicle for the talent of polished British actor Daniel Gerroll, in a solo tour-de-force performance that is smartly directed by NCRT artistic director David Ellenstein.”

“Gerroll brings Glas, with all of his analytical and murderous imaginings to life with a starched backbone and a chill.”– EH Reiter, Broadwayworld

“With the winning combination of playwright Jeffrey Hatcher, director David Ellenstein and celebrated actor Daniel Gerroll giving a tour de force performance as Dr. Glas, mark your calendars as a must-see. I hope you enjoy it as much as I did. Let’s just say that there’s more than a morsel to digest in this world premiere psychological thriller.” – Carol Davis, Critic

“Gerroll is excellent as the chameleon-like doctor, who tries to tailor his prescriptions to fit both his patient’s needs and his own desires. It requires quick thinking and imagination, with which both Gerroll and his character seem abundantly endowed, and the piece’s sixty minutes seem to fly by.” – Jean Lowerison, San Diego Stage & Film

“Daniel Gerroll, the reason I sought out this play, is marvelous. His Dr. Glas is so firmly entrenched, so fully realized, it’s as if we tune into history in progress. The actor’s bearing, accent, and movement speak of erudition and class. David Ellenstein’s Direction is adroit, pacing splendid.” – Alix Cohen, Woman Around Town (NY Critic)

“Award-winning British television and screen actor Daniel Gerroll gives a captivating performance that delivers on all counts in his portrayal of an unfulfilled and alienated man whose initial joy in finding passion becomes obsession and ultimately menace. Playwright Jeffrey Hatcher has crafted a taut 60-minute play as intricate and riveting as classic film noir.” – Lynne Friedmann, Culture Vulture

Dr. Glas is the 7th and final show of Season 39 and all current season 39 subscribers have received an email with an access code. 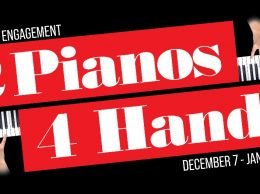 What do these shows have in common? 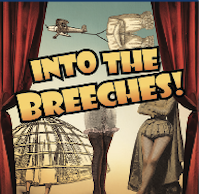 North Coast Rep- “Into The Breeches”