Warning: A non-numeric value encountered in /home/customer/www/thevistapress.com/public_html/wp-content/themes/dailypress/include/breadcrumbs.php on line 54
Calendar >  Oceanside Theatre and New Village Arts Collaboration is a Win-Win for Everyone

TR Robertson –It has taken two years of patience on the part of two outstanding theatre arts companies, Oceanside Theatre Company and New Village Arts Theatre, but the wait was well worth it on their latest collaboration, the award-winning musical Into the Woods. A shut down of all theatre companies during the COVID pandemic restrictions and a major remodel of Carlsbad’s New Village Arts Theatre led to NVA’s founder and director Kristianne Kurner and OTC’s Producing Artistic Director Ted Leib joining together to stage one of the classics of musical theatre on the OTC stage. A stellar cast of actors, made up of veterans of NVA and OTC productions and many performers making their NVA and OTC stage debut, entertained a well-attended opening night performance of the energetic musical, Into the Woods.

Into the Woods, with music and lyrics by Stephen Sondheim and a book by James Lapine, debuted in San Diego at the Old Globe Theatre in 1986 and premiered on Broadway on November 5, 1987. It won three Tony Awards (Best Score, Best Book, and Best Actress in a Musical for Joanna Gleason), competing against the premier of Phantom of the Opera. The musical also won five Drama Desk Awards, including the award for Best Musical. In 2002, Into the Woods won Best Revival of a Musical Tony Award and Drama Desk Award. The musical was released as a Disney film adaptation in 2014 and received Academy Award and Golden Globe Award nominations. 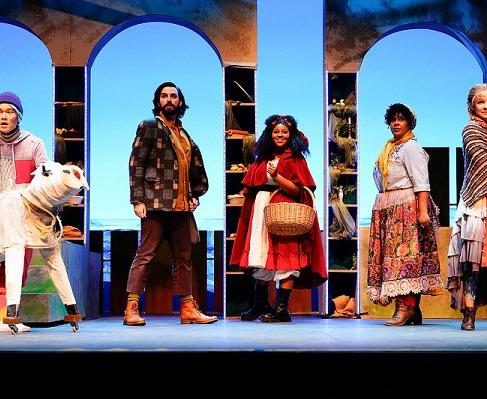 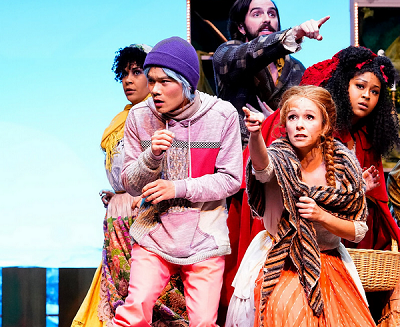 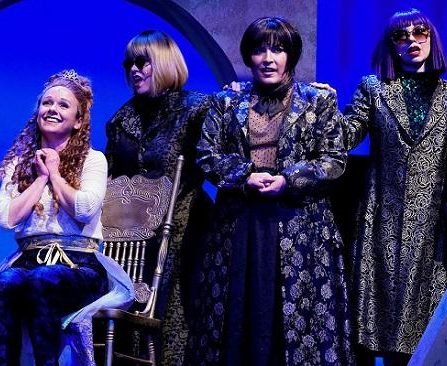 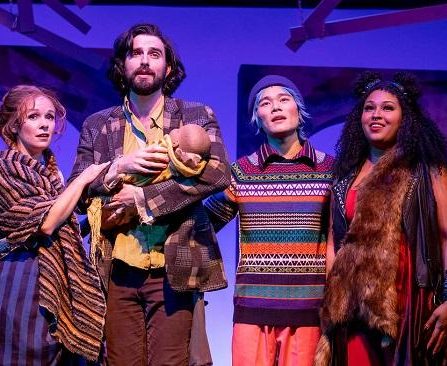 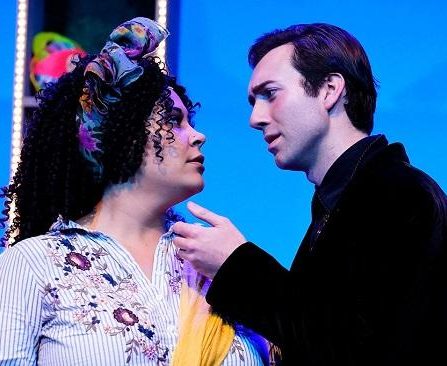 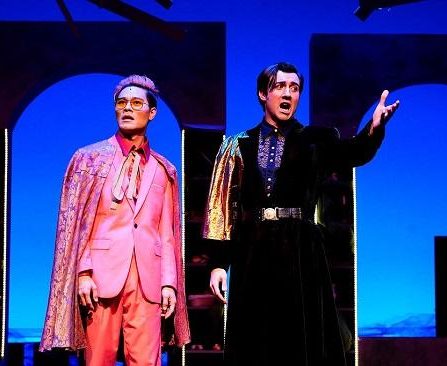 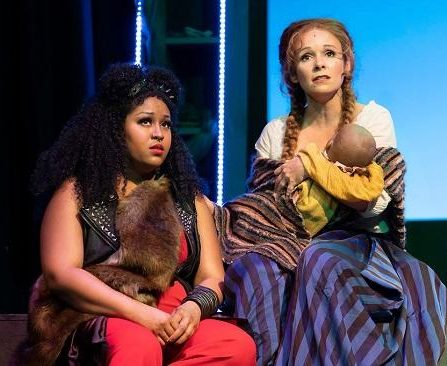 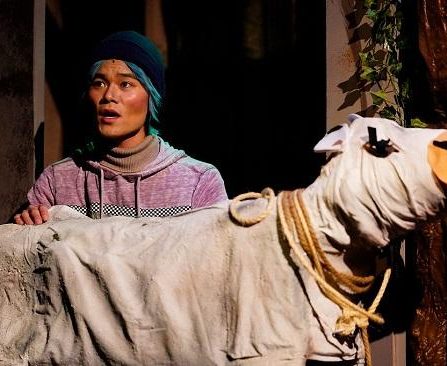 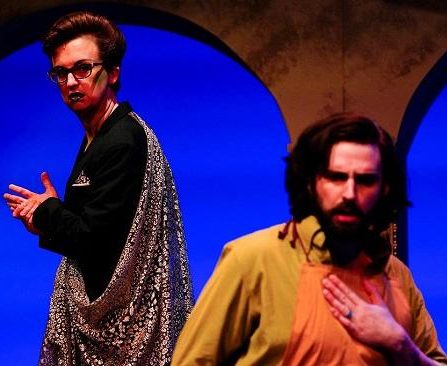 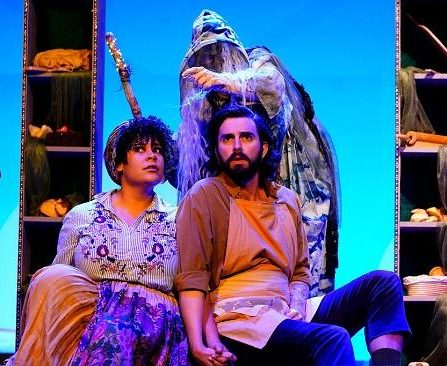 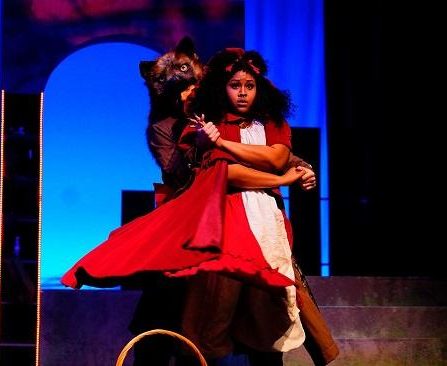 The Sondheim musical weaves several Brothers Grimm fairy tales into tales of wishes, desires, consequences, and quests. The main characters are taken from partial stories of Cinderella and Prince Charming, Little Red Riding Hood and the Wolf, Jack and the Beanstalk, Rapunzel and a witch intermixed with a childless Baker and his Wife. A witch has placed a curse on the Baker and his wife’s family because of a theft of vegetables from the witch’s garden by the Baker’s father, causing the witch to lose her beauty. To break the spell, the Baker and his wife must retrieve a cow as white as milk, a cape as red as blood, hair as yellow as corn and a slipper as pure as gold. This quest, along with a few magic beans, will lead the Baker and his wife into meeting and interacting with a number of local folks, all who end up in the woods, lost for a period of time and all on a variety of quests as well.

Jack and his mother needs money to survive as Jack is sent to sell his beloved Milky White Cow. Cinderella desires to attend the ball at the palace. Rapunzel is tired of being kept in the top of a tower being raised by the witch and Red Ridinghood is on her way to her grandmother’s home only to be eaten by the wolf (later rescued by the Baker). These characters both will help and hinder one another throughout the musical as they search for what will make them happy. Some will go through major changes; some will achieve their goal, and some will not make it – it is a Grimm tale. As the Baker’s wife says, “If you know what you want and you find it, take it.”

The success of this play is finding the right performers to fit each of the characters in the musical and NVA Director Kristianne Kurner, a San Diego Theatre Critics Circle award winner, has most assuredly accomplished this task. Each of the thirteen-member cast could not have been any better for the role they were selected. Not only did the talented actors have strong voices individually, but when singing with other cast members their voices blended perfectly. One significant congratulation to the theatre company is the last-minute opening night change of Layth Haddad from the Steward to a key role of the Narrator, the Mysterious Man and Cinderella’s father. Stepping in to play the Steward was understudy Jac Mannion. Both performers were making their NVA and OTC debut and did not miss a beat in their performance.

Each of the actors in the musical has a number of individual performances with wonderful performances. Megan Carmitchel as Cinderella, Sydney Joyner as the Baker’s Wife, Luke Monday as the Baker, Kevin Phan as Jack, and Jasmine January as Little Red Ridinghood all stood out both individually and in duets throughout the show. Rae Henderson-Gray as the Witch gave a powerful performance with a strong voice, especially in songs like “Lament,” “Last Midnight,” “Stay with Me” and in the closing song with the Company, “Midnight/No One is Alone/Children Will Listen/Into the Woods.” Rae is also the Managing Director of NVA.

Kevin Phan as Rapunzel’s Prince and Tanner Vydos as Cinderella’s Prince were audience favorites with their performance of one the musicals most memorable and funny songs, “Agony.” Also contributing to the success of the musical’s performance were Lauren Ashley as Jack’s Mother and Granny, Brittany Adriana Carrillo as Rapunzel and Cinderella’s Stepmother, Taylor Magee as Lucinda, and Olivia Pence as Florinda.

Into the Woods is a fun, somewhat light-hearted and fast paced musical appropriate for people of all ages, but remember it is partially based on Grimm tales. It is also three hours long with a twenty-minute intermission. The musical will be at Oceanside Theatre Company’s Brooks Theatre located at 217 N. Coast Highway until May 1st. At the present time masks are still required inside the theatre. Parking is conveniently located at the Civic Center one block north of the theatre. There are also numerous eateries within easy walking distance of the theatre. Tickets are available at www.oceansidetheatre.org, www.newvillagearts.org or call 760-433-3245.

Next up for NVA is Final Draft – New Play Festival beginning April 1st. Songs for a New World will begin for OTC June 3rd.

One final thought, Into the Woods has a series of lessons each of the main characters learns. The closing song of the musical features one final lesson for all of us – “Careful the things you say: Children will listen.”