TR Robertson  ….“Red Velvet”, now on stage at the Old Globe Theatre’s Donald and Darlene Shiley Stage, takes audience members into the world of the English theatre of the 19th century and a look at one of the best American Shakespearean actors few in the United States have ever heard of. The play, written by award winning actress and writer Lolita Chakrabarti, shows a glimpse into two time periods from the life of African-American Shakespearean theatre artist, Ira Aldridge, beautifully performed by accomplished theatre, film and television actor Albert Jones.

Few people have heard of Ira Aldridge, who began his acting career in the pre-Civil War United States of the 1820’s. Aldridge began acting at the African Grove Theatre, in New York City, where he was introduced to the world of Shakespeare. Racial prejudice made it difficult for him to develop as an actor, so at the age of 17 he decided to immigrate to England, where he hope a more lenient view of race would help him establish himself as an actor. Aldridge would make his London debut in 1825 in the play “Oroonoko” and would begin touring regions in England. At the age of 19, Aldridge would perform his first Othello. Many of his performances were done in whiteface, as the abolitionist movement of England was still in its early stages. Slavery had been abolished on English soil in 1772, but would not be abolished in the British colonies until 1833 with the passing of the Slavery Abolition Act. Racial tension still existed throughout England.  Along with this, his performance on stage was seen as a different style than most theatre goers had seen, breaking away from the traditional English structured presentation of Shakespeare. Aldridge presented a more naturalistic, humanized acting style, loved by audiences and some critics outside of London, but abhored by the London press. 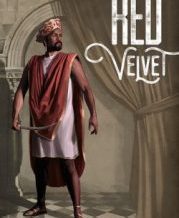 “Red Velvet” begins in 1867, toward the end of Aldridge’s life, as he is preparing for a performance of King Lear in Lodz, Poland. Returning to the Globe stage is Director Stafford Arima, who along with Scenic Designer Jason Sherwood, created a wonderful back stage set that would shift as needed for scenes. Arima stated he was not familiar with Aldridge’s story until he read the play and began researching his life. He was inspired by the story of Aldridge’s struggle and fight to work in the world of the theatre while surrounded by obstacles most would have shied away from. Aldridge is set upon by a pushy aspiring reporter, played by Amelia Pedlow, who is trying to find out more about the actor. From here the play will shift to 1833, 34 years earlier, backstage at London’s Theatre Royal, Covent Gardens, where we meet a series of actors from the Theatre Royal stage, as they are meeting to hear from their director about a replacement for an actor who has fallen ill. The actor being replaced is the legendary English actor Edmund Kean, the lead of “Othello”, and the director is Pierre Laporte, played convincingly by Globe veteran and Drama Desk Award nominee Sean Dugan. We will see Pierre as both a friend to Aldridge and someone who will give into pressure that will effect both of them profoundly later on. Pierre will enter the cast meeting, and much to the surprise and consternation of the actors and actresses, introduce Ira Aldridge as Kean’s replacement. From this point on, various verbal sparring matches and battles ensue between cast members and Aldridge as he attempts, in a somewhat over-bearing way, to show the cast that not only is he worthy of the part, but his acting style is the best way to present Othello.

The cast, steeped in the traditions of the English stage and a more structured, formal presentation of Shakespeare, has difficulty with Aldridge’s style. One actress he begins to win over is Ellen Tree, played by successful television actress Allison Mack. Ellen slowly begins to understand the depth and commitment Aldridge brings to his role. Ellen finds that her role as Desdemona, Othello’s wife, is more moving if she follows Aldridge’s lead. Still, the other actors feel that his portrayal of Othello will not works as “the thing you need to understand about the English is we are open to a point.” His attempt to change the way the audience views Shakespeare on stage and attempts to make it current is simply “misguided liberalism”.

Most of the hostility toward Aldridge comes from Kean’s son, Charles, masterfully performed by another Globe veteran, John LaVelle. LaVelle provides many comical moments, especially with his flying locks, as well as moments of hostility directed toward Aldridge. Charles is especially upset that Ellen seems to be showing more interest in Aldridge than he feels she should. A tremendous supporting cast presents a glimpse into the backstage world of the English stage. Michael Aurelio as Henry Forrester, Amelia Pedlow as both Betty Lovell and Aldridge’s wife Margaret, and Mark Pinter as Bernard Warde present both empathy and reluctance with the changes going on around them. Monique Gaffney, playing Jamaican serving girl Connie, stays in the background for most of the play until her scene with Aldridge as he confronts the newspaper reviews that have negatively reported on his portrayal of Othello. Connie tries to shield him from the negative reviews, but as Aldridge sees that discrimination, bigotry and persecution still exists in the English society, at least in the news, he tries to justify his love for the theatre and acting. He says to her, “That’s the beauty of theatre, it gets under your skin”; to which Connie replies, “I find that life does that anyway”.

Classic period costuming by Costume Designer David Israel Reynoso and effective lighting from Lighting Designer Jason Lyons also allow Director Stafford Arima to create, on stage, a portrayal of someone from the history of the theatre world all theatre attendees should know. The name “Red Velvet” refers to the old style English theatre décor used in the majority of the theatres of Europe.  Ira Aldridge helped establish a breakthrough in acting style that is still used today in helping actors “become” the person they are portraying on stage. He was daring, brave in a time when lives were lost for standing up for what you believed in, and a revolutionary in the theatre world. Ira Aldridge is the only African American to have a bronze plaque among the 33 actors honored at the Shakespeare Memorial Theatre at Stratford-Upon-Avon and he won numerous awards for his performances in Prussia, Switzerland and Russia. Audiences loved his performances, even if critics had trouble dealing with the changes he brought to the stage.

NEXT ARTICLE →
A Tribute to Gene Kelly