TR Robertson –A light-hearted comedic fantasy was Artistic Director David Ellenstein’s choice to open the 41st Season of Solana Beach’s North Coast Repertory Theatre and if the audience response is any indication, this was a very good choice. Directed by Ellenstein, Annabella in July is fast paced, cleverly directed, witty and very funny. The play was written by award winning playwright Richard Strand, a recently retired professor, technical director and set designer from Mt. San Antonio College who has written 20 plays. His play, Ben Butler, was also directed by Ellenstein at NC Rep last year. 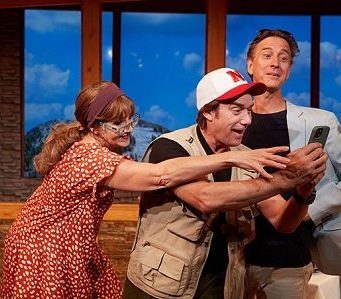 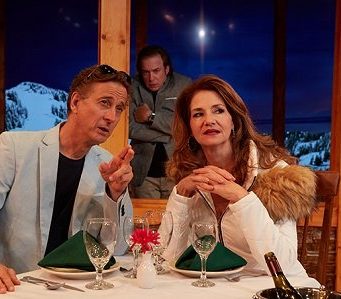 The whimsical comedy begins with Vanessa and husband Brian arriving at a ski resort in California in July, after Brian became fascinated with trying to photograph a butterfly and the couple stumbling on the resort. Vanessa felt this might be a good place to get something to eat so she attempts to find someone who works there to serve them. This is where the fun and chaos begins. As the two employees of the ski resort come in, they each excitedly greet her as the missing Annabella, much to the confusion of Vanessa and Brian. Vanessa is a librarian and Brian is a tile setter from Nebraska and they both insist Vanessa is not Annabella, an exhuberant personality who was last seen in December and who supposedly skied away from the resort. The ski lodge owner, Camelia, and teenage waitress, Piper, are adamant in feeling Annabella has returned. Vanessa and Brian do their best to try and convince them she may look like Annabella, but she is really Vanessa from Nebraska. To make matters worse, Alexander arrives, a French ski bum, who also insists this is Annabella, the woman he was going to ask to marry him. Back and forth they go, every possible argument is given to Vanessa and Brian to try to prove she is Annabella. Vanessa and Brian offer every argument to prove she is not Annabella. The dialogue is hilarious, the facial expressions priceless, especially when Brian feels threatened by the romantic gestures of Alexander toward Brian’s wife. But Act I is just the prelude to what will be a trip into the world of fantasy as Vanessa becomes Annabella, or is she still Vanessa, in Act II, and Brian and Vanessa’s marital world and their relationship comes under question.

Multi-regional performer Jacquelyn Ritz returns to NC Rep as the bewildered and frustrated Vanessa. She is masterful in presenting Vanessa’s attempts to deal with the three personalities at the ski resort, who are determined to prove she is the missing Annabella. Also returning to NC Rep, this time as Vanessa’s husband, Brian, is Louis Lotorto, also a multi-regional performer. Louis’s portrayal of the mild-mannered husband, who becomes increasingly frustrated with everything going on around him, grows funnier with each scene. Especially entertaining is his interactions with the over-the-top French ski bum, Alexander.

An audience favorite is Bruce Turk’s performance as Alexander, the French ski bum who is supposedly in love with Annabella. The quirky Alexander is quick with a snide response, clever when talking to Brian and his over-accentuated French accent makes every comment even funnier. Turk is an award-winning actor who has performed On and Off Broadway and is also returning to NC Rep, having last performed there in Ben Butler.

The employees of the ski resort were Leilani Smith, as the resort owner Camelia, and Catalina Zelles, as the energetic teenager Piper. Both of these performers had also performed in previous NC Rep productions. As Camelia and Piper they both enthusiastically tried to convince Vanessa she was actually Annabella returning to the resort. They both also had strong reasons to want this to be the real Annabella as Camelia was harboring a desire to establish a more serious relationship with Annabella and Piper desired to establish a mother daughter bond with her.

The ending of the play will give those attending something to talk about as Vanessa/Annabella will directly interact with and impact each person at the resort in ways specifically related to that individual. The final scenes shift in tone reflecting this and giving the audience much to talk about. As Vanessa/Annabella says, “If you keep telling yourself long enough you might start believing it.” What is truth and what is fiction in each individual’s life?

Annabella in July will run until October 2nd at North Coast Rep. Tickets are available at 858-481-1055 or go to www.northcoastrep.org. Next on stage at NC Rep is Into the Breeches! By George Brant, opening on October 19th.