With the Production of Kentucky – Leah Nanako Winkler

Palomar Performing Arts will be presenting Kentucky – By Leah Nanako Winkler – Directed by Michael Mufson on May 6th – 15, 2022.  Performances will be on Thursday, Friday, Saturday at 7:30pm, and Sunday at 2:30 p.m. and will be held in the Palomar College Studio Theatre

The story centers around Hiro, A Japanese-American 30 something who is returning after seven years in New York City, to her Kentucky hometown, determined to stop her younger sister’s wedding to a born-again Christian.  Armed only with anti-anxiety pills and the baggage of her dysfunctional upbringing, Hiro confronts forgotten friends, former flames, the family she fled and the fragile assumptions that hold her life together.

In a recent interview Winkler said, “I often write initially from a deep, personal place that carries a lot of pain. And then this pain transcends into manic hilarity on stage because pain is funny in retrospect.”  (https://artistsatplay.org/2016/02/15/playwright-interview-leah-nanako-winkler/) The play begins with Hiro in her therapist’s office, begging him to be on call for her 24/7 as she anticipates the retraumatizing regression of returning to the home that she no longer considers home.  Her manic determination to protect the women of the family that she left behind drives the comic and poignant revelation of Hiro’s flawed assumptions about almost everyone she encounters, especially herself.

Director Michael Mufson said, “Being a cosmopolitan New Yorker myself, I relate to Hiro, because I share many of the assumptions she carries about the rural south and born-again Christian culture.  As I witnessed Hiro fail to communicate and connect due to the weight of these assumptions, I recognized my own flaws and made a connection to our nation’s cultural divisions.  While the play does not directly address the “Culture Wars” that are currently raging in our country, there is something profound at the core, urging us to release the assumptions we cling to, that only serve to feed a false sense of superiority.

Winkler’s diverse cultural background and influences, having grown up in Kamakura, Japan and Lexington, Kentucky, sparks an unconventional style that blends realistic scenes with poetic reveries and even some musical numbers.  The play is artfully constructed with layers of bold and subtle flavors and bouquets that draw you deeper and deeper in to the human yearning for home, belonging, meaning and happiness.

Tickets and updated information can be found at www.palomarperforms.com. Tickets prices range from $10 to $15 and are available at www.PalomarPerforms.com.

NEXT ARTICLE →
Museum Of Making Music 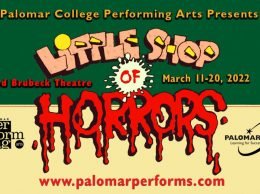