Ray Huard …. In the six years that he’s been principal at Grapevine Elementary School, Rafael Olavide has transformed the school, according to teachers he works with. 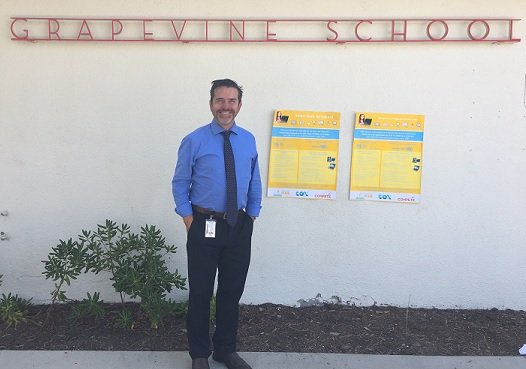 When we got him as principal, the school was OK, but it wasn’t that great,” said Monica Davila, a fifth grade teacher who’s been teaching for 28 years, seven at Grapevine.

“I feel like now, I want to be here. Many teachers want to be here. We even have teachers from other schools that are interested in coming to our school to work here,” Davila said. “It’s definitely because of him. He’s very respectful of teachers. He treats us like professionals, and he’s very much for students’ success.”

Kindergarten teacher Lara Sims, who’s been at Grapevine for three years, said that Olavide “really has a passion for our kids.”

“He’s definitely the face of our school,” Sims said. “It’s a caring place, where we are a family.”

That sense of family is one of the things which defines Grapevine Elementary.

“We’ve been able to create a system where our families trust us,” Olavide said. “We’re in the community. This is a community school, so we want them to be part of it.”

As Olavide sees it, Grapevine’s transformation is ongoing as he sets out to establish the school’s brand as a model for language development.

“From an academic standpoint, I think our students need to get some good foundations in language and literacy,” Olavide said. “I believe the community will benefit from a strong academic language environment.”

About 85 percent of Grapevine’s 660 students are Latino, and many of those are English learners.

Grapevine teachers have been trained in a language teaching method know as GLAD, which stands for Guided Language Acquisition Design. GLAD uses posters and songs to reinforce the vocabulary that students learn.

“We do a lot of chants, chants and songs about what we’re studying, all these fun chants that incorporate the vocabulary we want them to learn,” Sims said.

The school also is developing a language immersion program, to begin in the 2018-2019 school year.

“We’re going to have a path for the student who wants to learn Spanish,” Olavide said. “That student who starts in kindergarten, by fifth grade, will be fluent.”

For example, if a student is running down a hallway, a teacher will tell him to walk instead of saying don’t run, Olavide said.

Students also earn grizzly dollars for good behavior. The grizzly bear is Grapevine’s mascot, and grizzly dollars can be redeemed every Friday for cafeteria treats, school supplies or toys.

A native of Spain, came to the United States in 1993. He has a bachelor’s degree in liberal arts from the University of San Diego and a master’s degree in bilingual and multilingual education from California State University San Marcos. He earned his teaching credentials at CSU San Marcos.

Olavide studied law in Madrid, and thought his career would be something to do with law.

All that changed when he got a summer school job coordinating an English language development program, which also was how he met his wife Debra, a fourth-grade teacher in Oceanside.

The couple have two children – Victoria, 20, a junior at California State University Channel Islands in Camarillo, and Michael, 17, a senior at San Marcos High School.

Part of Olavide’s summer job in Madrid was recruiting teachers from the United States and elsewhere to teach English in Spain, and one of the teachers he recruited was the woman who became his wife.

“I hired her over the phone,” Olavide said. “I picked her up at the airport, and 25 years later, here we are.”

His summer job also included some teaching, “And, I said, ‘you know what, I like this.’”

Olavide began his teaching career at Grapevine, then moved to Temple Heights Elementary School, where he was a teacher, then assistant principal before becoming Grapevine’s principal.

“I always wanted to come back here,” Olavide said. “This is a very special place.”

Much about Grapevine is the same as it was when he first came to the school, Olavide said.

“The needs are the same. The demographics are the same,” Olavide said. What’s different, he said, is, “We have busier parents.”

Picking The Best T.V. Comedy Duos of All Time